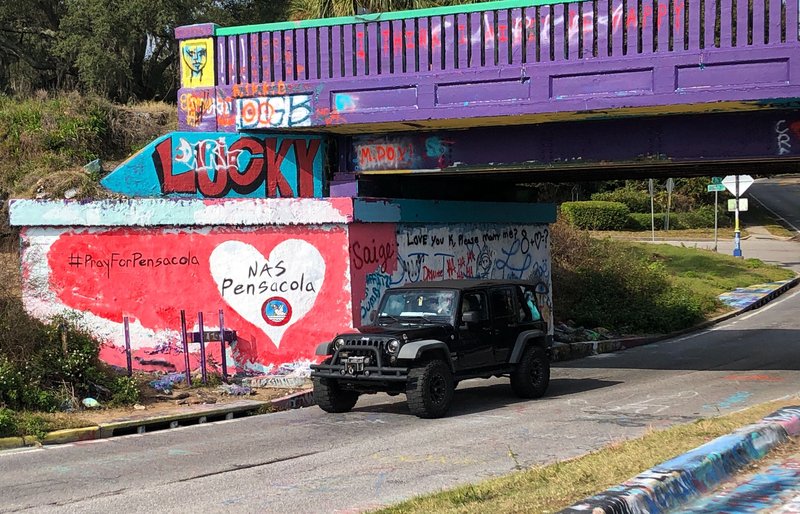 A vehicle drives by a tribute to victims of the Naval Air Station Pensacola that was freshly painted on what’s known as Graffiti Bridge in downtown Pensacola, Fla., on Saturday, Dec. 7, 2019. (Photo: AP)

The Pentagon on Tuesday ordered a broad review of vetting procedures for international students who participate in training on US military installations and demanded the process be strengthened, in direct reaction to last week’s deadly shooting at a Pensacola Navy base by a Saudi aviation student.

The FBI confirmed Tuesday that the 21-year-old Saudi Air Force officer who killed three US sailors and injured eight other people at the Pensacola base on Friday legally bought the 9mm Glock pistol he used. Investigators are digging into whether 2nd Lt. Mohammed Alshamrani acted alone, amid reports he hosted a party earlier last week where he and others watched videos of mass shootings.

The incident has raised questions about how well international military students are screened before they attend training at American bases.

Norquist’s memo says the review of the vetting must be completed in 10 days, and the flight restrictions will continue throughout the review and until they are lifted by senior leaders.

″Äs we reaffirm our commitment to these critical military partnerships, so must we assess the efficacy of our security procedures in light of the tragic loss of life on December 6,” the memo says. “We will make every effort to ensure the safety of all personnel and their families on US military installations.”

US officials said the flight restrictions were not triggered because there are indications of any broader problems or conspiracy fears related to Saudi students or the shooting. They said it was more because the shooting suggested some possible vetting problems associated with Saudi Arabia that will be reviewed.

Norquist in the memo directed the defense undersecretary for intelligence to “take immediate steps to strengthen personnel vetting” for international students and to review “policies and procedures for screening foreign students and granting access to our bases.”

He said the US is working closely with Saudi officials in the response to the shooting.

The Pentagon has said that about 850 Saudi students are currently in US military training programs. US officials told reporters on Tuesday that they aren’t sure how many of those would see some type of flight or other restriction, but many will. Overall there are about 5,000 international students in US programs, said the officials, who spoke on condition of anonymity to provide details about the review and the memo.

Currently international military students go through screening by the State Department and the Department of Homeland Security. The US mainly runs background and biometric checks on the students to determine if they are security risks.

The Navy’s more limited flight training restriction for Saudi students was ordered Monday night, according to Commander Clay Doss, a Navy spokesman. He said said classroom training is starting again this week, and flight training for other US and international students will resume.

The Navy’s flight restriction affected 140 students at Pensacola Naval Air Station, where the shooting occurred, and 35 at nearby Whiting Field. Another 128 students at Naval Air Station Mayport, on the Atlantic seaboard, are also restricted. Doss said the stand-down is an effort to ensure the safety of the students, as they recover from the trauma of the shooting.

For the most part, military installation commanders have the authority to set their own security procedures, including base entry screenings and carry permits for guns. There is a baseline level of security that must be met, but commanders can make any of their procedures more stringent if they believe it’s necessary.

Under Defense Department guidelines, commanders can authorize personnel to carry government-issued or personal firearms as long as they have been screened, they meet qualifications, follow specific handling and storage conditions, and receive permission in writing. The permission is usually good for at least 90 days, and must be routinely reviewed in order to be renewed.

Under the Pentagon guidelines released in 2016, personnel participating in official training programs can not be authorized to carry weapons unless approved by the administrator prior to the training.

The current security level across all Defense Department facilities is force protection condition Bravo and that status is noted at the entry of all installations, including the Pentagon.

US Northern Command ordered an increase in defense-wide security from condition Alpha to Bravo in May 2015 due to concerns about threats from the Islamic State group. IS militants had a considerable hold on territory in Iraq and Syria and threatening western targets.

Condition Bravo is when there is an ïncreased or more predictable threat of terrorism attack or hostile act, and that it is directed against Defense Department entities or personnel, according to the department. The levels go from Normal to FPCON Delta, which is the highest and applies when a terror attack has occurred or is anticipated.