WORLD Pentagon to send about 800 troops to US-Mexico border

Pentagon to send about 800 troops to US-Mexico border 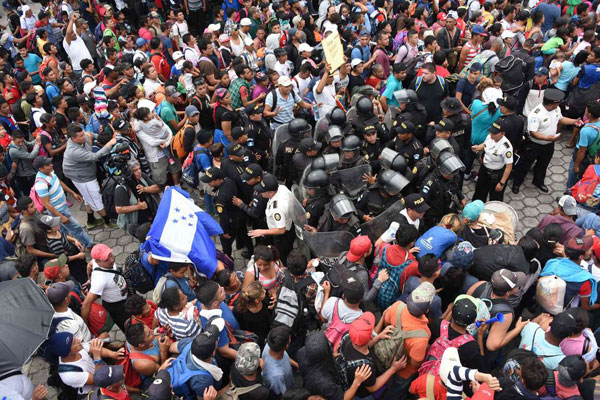 The Pentagon is expected to deploy about 800 troops to the US-Mexico border, two US officials told AFP on Thursday, after President Donald Trump said the military would help tackle a "national emergency" and called on a caravan of US-bound migrants to turn around.

The active-duty troops would augment the 2,000 or so National Guardsmen already deployed to support operations on the border, and could come from multiple military bases around the US.

Defense Secretary Jim Mattis was expected to sign orders either Thursday or Friday for the new deployment, one official said.

The troops would include doctors and engineers and would be used mainly to provide logistical support including tents, vehicles and equipment.

The official said the troops would satisfy elements of a "wish list" for military assistance sent to the Pentagon by the Department of Homeland Security, the US agency with responsibility for the border.

Trump tweeted that "Democrat inspired" laws make it difficult to stop people at the border.

"I am bringing out the military for this National Emergency. They will be stopped!" he said.

In April, Trump said he would send thousands of National Guard troops to the southern border.

That initial authorization allowed for about 4,000 guardsmen to be sent to the frontier, but only about half that number have been deployed.

Those troops are mainly serving in a support role to help free up border patrol officers.

Pentagon spokesman Navy Captain Bill Speaks said the Defense Department was currently working with the Department of Homeland Security "to determine the specifics of our support" to border authorities.

Thursday's move comes as thousands of Central American migrants are crossing Mexico toward the United States in a slow-moving caravan.

The issue has become a rallying cry for the US president, who has taken a hard line on illegal immigration and has repeatedly kept the story in the headlines in the run up to America's midterm congressional elections that could see the Democrats regain some degree of power.

The New York Times reported Thursday night that Trump is considering issuing an executive order to block Central American migrants from crossing the border. It would invoke the same section of immigration law that Trump cited to back up his Muslim travel ban, the Times said.

The order would also create new laws disqualifying migrants who cross the border in between ports of entry from claiming asylum, the Times said, quoting people familiar with the plan, although exceptions would be made for people facing torture at home.

Altogether the order would prevent hundreds in the caravan from entering the US and asking for asylum, the newspaper said.

"To those in the Caravan, turnaround, we are not letting people into the United States illegally," Trump tweeted Thursday afternoon.

"Go back to your Country and if you want, apply for citizenship like millions of others are doing!"

Trump had signaled his intention to send more troops last week, tweeting that unless Mexico stopped the "onslaught" of people from Guatemala, Honduras and El Salvador, he would "call up the U.S. Military and CLOSE OUR SOUTHERN BORDER!"

He has also announced the US would start cutting aid to Guatemala, Honduras and El Salvador.

Guatemalan Foreign Minister Sandra Jovel dismissed the threat as a posture adopted for the media, telling reporters that the country had received no official notice of the move.

Early Thursday, the caravan set off from the town of Mapastepec in the southern Mexican state of Chiapas, moving on to the next stop in their long march north.

Some rode on trucks but most made the trek to the town of Pijijiapan on foot.

"Little by little, we are going to arrive," said Luis Alberto Adalberto, 21, one of the migrants.

But four days after crossing into Mexico, the caravan is still more than 3,000 kilometers (1,860 miles) from the US border.

"It's hard, and we know this country is dangerous too, but back in Honduras it's even more dangerous, they kill for nothing," said Josena Anibal Mejia, 27, as he walked with his daughter.

The United Nations estimates that 7,000 people have joined the caravan since it set out from San Pedro Sula, Honduras, on October 13.

(Top photo: Guatemalan security forces try to prevent Honduran migrants from reaching the Guatemala-Mexico international border bridge in Ciudad Tecun Uman, Guatemala, on October 19, 2018. US President Donald Trump threatened on October 18 to send the military to close its southern border if Mexico fails to stem the "onslaught" of migrants from Central America, in a series of tweets that blamed Democrats ahead of the midterm elections. / AFP )