WORLD Perpetrators of the nuclear scientist's death have a 'long list of assassinations': Iranian Ambassador

Perpetrators of the nuclear scientist's death have a 'long list of assassinations': Iranian Ambassador

Iran's Ambassador to China Mohammad Keshavarzzadeh told the Global Times in an exclusive interview that preliminary evidence suggests the assassination of Iranian nuclear scientist Mohsen Fakhrizadeh was committed by "perpetrators [who] have a long list of assassinations in the sensitive region of the West Asia and beyond." 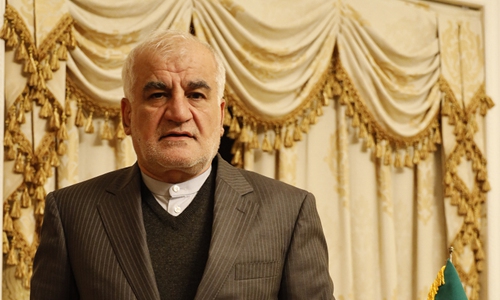 "Iran reserves its rights to take all necessary measures to defend its people and secure its interests against any adventurist measures by the US and Israel against my country, particularly during the remaining period of the current administration of the United States in office," Keshavarzzadeh said.

On Friday, Fakhrizadeh, who was dubbed the "father of the Iranian bomb," was assassinated near Tehran by "armed terrorists," according to the Iranian Ministry of Defense. The assassination has ripped through the East Asia region, and caused worldwide concerns over the country's possible retaliation that many worry may lead to a catastrophe.

Iran is holding Israel accountable for the assassination, and Israel has not publicly commented on the accusation. Many analysts say the attack may dim prospect for US President-elect Joe Biden's presumed plan to resume talks with Tehran over the nuclear deal, which he has expressed willingness to rejoin.

Ambassador Keshavarzzadeh told the Global Times that Iran has not been in touch with Biden's team. "As far as the US is not a member of the JCPOA [Joint Comprehensive Plan of Action], we won't negotiate with them."

Ali Shamkhani, secretary of Iran's Supreme National Security Council, told the media during Fakhrizadeh's funeral on Monday that the operation was done "using electronic equipment" by Israel, which has long opposed the nuclear deal.

A New York Times report cited an American official and two other intelligence officials saying that "Israel was behind the attack on the scientist," but it's unclear how much the US knew about the attack.

The scientist had been a target of the "enemies" for the past two decades, said Keshavarzzadeh. "We knew that he had been threatened with assassination on several occasions and that he was being followed."

There were also media reports saying that Iranian Revolutionary Guards commander Muslim Shahdan was killed in a drone strike near the border between Syria and Iraq following Keshavarzzadeh's death. Asked to verify the drone strike, the ambassador said he "does not have specific information about it."

The ambassador said "Iran will certainly exercise its legitimate right to find the main perpetrators and agents of the assassination and punish them in accordance with international law."

There can be "no doubt that the Islamic Republic of Iran reserves the right to act within the framework of the principle of legitimate defense against organized terrorist acts and certainly such criminal acts of terrorism that endanger international peace and security will not go unpunished. Undoubtedly, Iran will give a calculated and decisive answer to the criminals who took Fakhrizadeh from the Iranian nation," he said, calling for the international community to take action to hold the perpetrators accountable.

According to the diplomat, the "terrorist act" took place at a time when Fakhrizadeh was playing a "prominent role" in the production of the first indigenous diagnosis kits and coronavirus vaccine for Iranian citizens.

"His great contribution to our national efforts in curbing the COVID-19 pandemic was conducted at a time when Iran is under inhumane sanctions of the United States, strictly preventing our access to humanitarian goods including medicines and medical equipment," he said.

The diplomat admitted that nuclear development in Iran will not end after the attack. "We will continue activities to ensure the peaceful nuclear rights of the Iranian people."

Recently Iranian Parliament National Security and Foreign Policy Committee passed a bill named "The strategic measure for the removal of sanctions," aimed at revitalizing Iran's nuclear activities in the wake of the assassination. The bill envisages increasing its uranium enrichment level to 20 percent.

The Atomic Energy Organization of Iran is always ready to increase production capacity and enrichment percentages if it is needed to manufacture industrially advanced machines, said the ambassador.

"Fakhrizadeh's death will not stop our nuclear program, which is non-military and focused on energy. If a government or an individual thinks that he can use the means of terror to prevent Iran's progress and advancement in the path of science, knowledge and technology, his ideas are completely wrong. Efforts to progress and succeed in all scientific fields will continue with vigor and speed and cannot be disrupted," he added.

While US President-elect Joe Biden expressed hope of reviving the nuclear deal from which the Trump administration withdrew in 2018, many analysts believe the attack will make Biden's job more complicated and a blow to readjusting bilateral relations when he becomes president in January.

Asked about the impact of the attack on Iran-US relations, the ambassador said the founders and supporters of the failed policy of maximum pressure are trying to use the last days of the Trump administration to "create tensions and destroy the environment created for the lifting of the oppressive sanctions."

"His [Fakhrizadeh's] assassination shows that the enemies of diplomacy are living in anxious days and intend to endanger world peace and security by disturbing the region," he said.

The diplomat repeatedly stressed in the interview that Iran reserves the right to respond to the assassination while being "aware of the conspiracies of the enemies of peace, stability and security in the region and the world."

He expressed hope in the incoming Biden administration, noting that Iran hopes the next US administration will "explicitly condemn Trump's policies against Iran and make up to its anti-human rights and terrorist acts [and] the wrong policies pursued by the previous government over the past four years in its first steps."

"The next administration must take great steps to make up for past mistakes and all that has tarnished America's image," he emphasized.

"Iran and the US can both decide and announce that they will return to the state before January 20, 2017, [when Donald Trump took office], and this can be a great solution to many issues and problems, and completely change the course and conditions, and then we can continue taking the next steps on different issues," he said, clarifying what Iran expects from the incoming US administration to solve the outstanding problems.

"Iran has always adhered to its obligations if all other parties have done so in a responsible manner, and we consider constructive interaction with the world as our strategy."