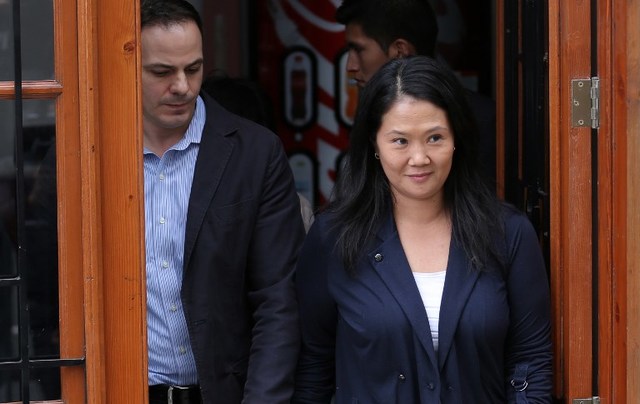 In this file photo, Peruvian opposition party Fuerza Popular (Popular Force) leader Keiko Fujimori (R) and her husband Mark Vito leave after the hearing to decide whether or not she will be placed in preventive detention was postponed, in Lima on October 21, 2018. (Photo: AFP)

Peru's powerful opposition leader Keiko Fujimori was taken into custody on Wednesday, October 31, after a court ordered her held in preventive detention for 3 years pending the outcome of a corruption probe.

The 43-year-old daughter of disgraced and jailed former president Alberto Fujimori is accused of accepting $1.2 million in illicit party funding from Brazilian construction giant Odebrecht, for her 2011 presidential campaign.

In ordering her detention, judge Richard Concepcion Carhuancho said there was a "serious suspicion" that Fujimori was running a "de facto criminal organization that is entrenched within" her Popular Force political party and had laundered illicit money.

Concepcion Carhuanco described Fujimori, who hugged her tearful US-born husband Mark Villanella in court before she was led away by police officers, as a "high flight risk."

As such, her said, "the only necessary measure in her case is undoubtedly preventive detention."

Public prosecutor Jose Domingo Perez had requested she be detained during the ongoing investigation into alleged illegal campaign funding.

Fujimori's lawyer, Giuliana Loza is expected to appeal the verdict and has 3 days to do so.

The judge took 8 hours to reach his verdict which almost certainly scuppers Fujimori's hopes of running for the presidency in 2021.

Fujimori has twice before run for the presidency but lost out in a runoff both in 2011 and 2016, despite the Popular Force party she founded in 2001 winning the most votes in both those elections.

She had been the Andean country's most popular politician and was trying to continue a family legacy begun by her father, the son of Japanese immigrants, who was president from 1990 to 2000.

But his political career ended in disgrace. And she and her brothers have been keen to turn around that legacy into a positive one.

The 80-year-old, currently recovering in hospital from a chronic heart condition, is 12 years into a 25-year sentence for crimes against humanity and corruption.

Peru's constitution allows for suspects to be held without trial for up to 36 months in complex cases such as the Odebrecht investigation, which involves tracing millions of dollars in illicit payments.

It also ensures that suspects cannot interfere with evidence or witnesses in an ongoing investigation.

Keiko Fujimori has accused the judge and prosecutor of conspiring against her, claiming "they are trying to get me out of politics, to bury me."

Her attorney Giuliana Loza has a 3-day deadline to appeal the detention.

Peru remains transfixed by the Fujimori saga and the media has gorged on the spectacle.

In Lima, people crowd around screens in cafes and bars in scenes reminiscent of the crowds that watched Peru's national team at the Russia-2018 World Cup.

But just when she needed it most, the unity that has helped make her Popular Force party become the country's biggest was unraveling.

As her party staggered under the weight of a string of resignations by senior officials, Keiko moved to suspend the leadership last week, handing the reins to an Emergency Committee to deal with the crisis.

Brazilian multinational Odebrecht has admitted spending hundreds of millions of dollars to buy politicians' favor in governments all across Latin America.