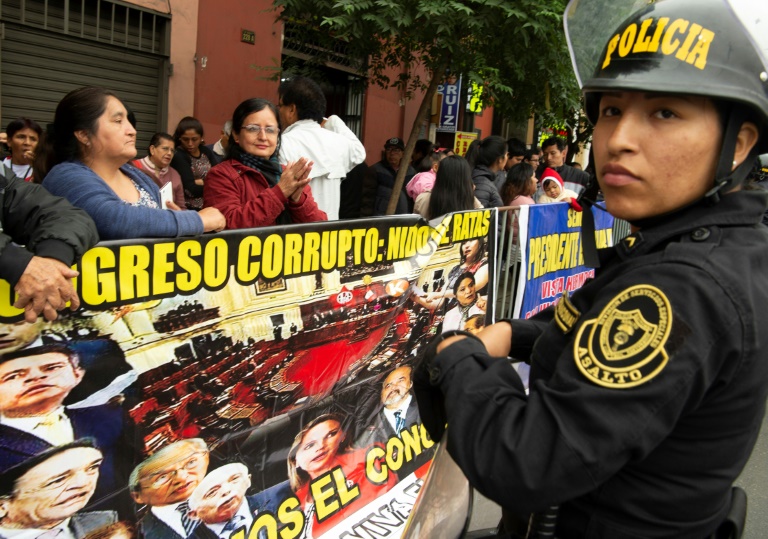 Peruvian President Martin Vizcarra scored a major victory for his government's anti-corruption policies Wednesday, winning a vote of confidence in the opposition-held Congress as the country seeks to emerge from the shadow of Latin America's biggest graft scandal.

The president sought the vote after threatening to dissolve Congress and force new legislative elections unless lawmakers backed his anti-graft proposals.

Vizcarra -- who succeeded the disgraced Pedro Pablo Kuczynski a year ago -- won by 77 votes to 44 with three abstentions, Congress speaker Daniel Salaverry announced.

"The course we have plotted continues. We continue working and putting Peru first, as always," Vizcarra said in a tweet after the vote.

The government is now expected to begin negotiations with the opposition over introducing the anti-corruption reforms.

They range from cleaning up campaign financing, limiting immunity from prosecution that lawmakers enjoy, and blocking those convicted in court from running for elected office.

Prime Minister Salvador del Solar defended the proposed reforms on Tuesday at the start of a 15-hour confidence debate that resumed early on Wednesday.

"We have to encourage citizens with a vocation to participate in politics, so that Peruvians can trust the authorities," he said.

Kuczynski stepped down last year following allegations of bribe-taking as part of the continent-wide Odebrecht corruption scandal that has embroiled three other Peruvian former presidents.

Vizcarra, 56, had been Peru's first vice-president and ambassador to Canada when he was appointed.

He used his maiden speech in Congress to deliver a tough anti-corruption message.

"The time has come to say we've had enough" he said, pledging to introduce policies that would punish "any type of irregularity."

But he has repeatedly clashed with Congress, which is dominated by the Popular Force party of Keiko Fujimori, who is herself in prison pending trial on Odebrecht-related corruption charges.

Odebrecht has loomed large over Peruvian politics as the Brazilian giant used a massive slush fund to wield influence across a dozen Latin American states.

It has admitted to paying nearly $800 million in bribes to officials across the continent over more than a decade to win big construction contracts.

Odebrecht said it paid 29 million in bribes to officials in Peru alone between 2004 and 2015.

Humala is the first former president to be indicted in relation to the affair.

Prosecutors have also taken aim at Alejandro Toledo, 73, president from 2001-06, who is facing extradition from the United States. He is charged with pocketing $20 million of Odebrecht's money.

Kuczynski, an 80-year-old former Wall Street banker who was president from 2016-18, was moved to house arrest in May after undergoing heart surgery.

Two time president Alan Garcia (1985-90 and 2006-11) died in April after shooting himself in the head as police arrived at his house to arrest him in connection with the scandal.

Her incarceration has seriously damaged her prospects of standing in the 2021 presidential elections she once was favorite to win.

But the taint of corruption in Peruvian politics precedes Odebrecht's involvement.

Keiko Fujimori's father, Alberto -- president from 1990-2000 -- is serving a 25-year sentence for crimes against humanity and corruption.