WORLD Phase III data of CoronaVac to be released in Brazil, boosting confidence in Chinese vaccine

Phase III data of CoronaVac to be released in Brazil, boosting confidence in Chinese vaccine 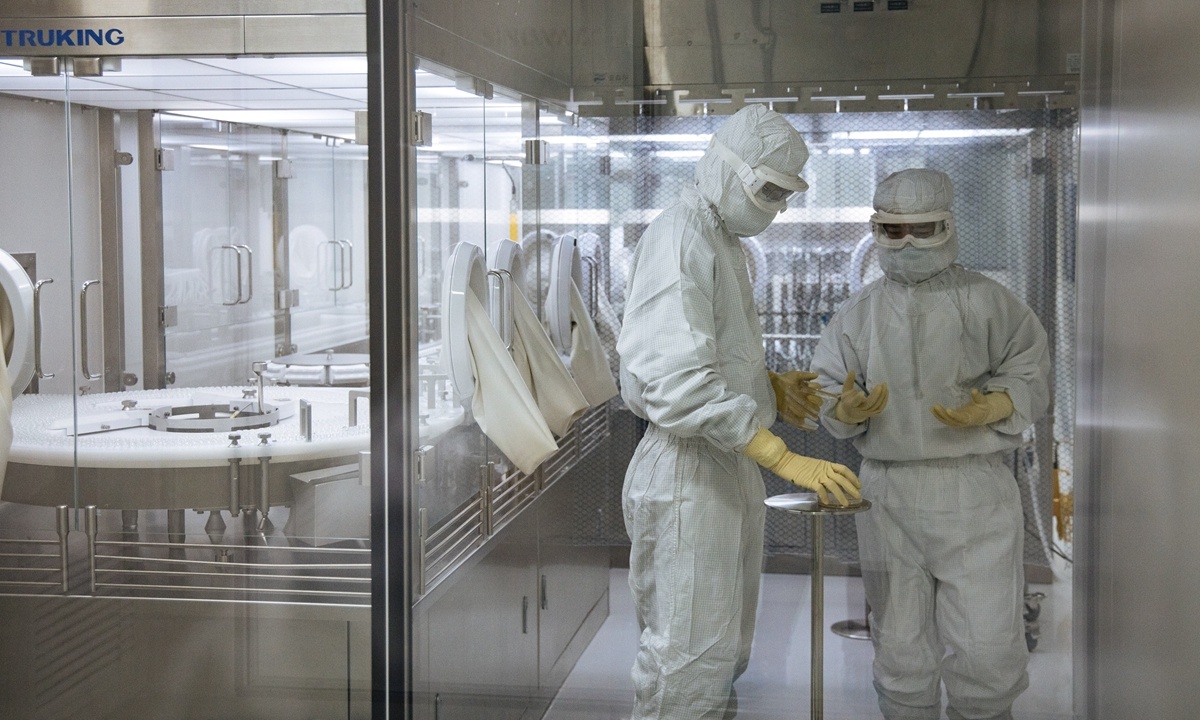 Brazilian health regulators are on schedule Wednesday to release late-stage data of trials of China's Sinovac's COVID19 vaccine - the first Chinese vaccine with full data - and to confirm its reliable protection amid high expectations of people of both nations, which will pave the way for quick registration and mass use in both China and Brazil.

The results to be unveiled, coupled with results from another leading Chinese manufacturer Sinopharm, is expected to add to the growing confidence that Chinese-developed vaccines can help end the pandemic, according to analysts. They noted that the move shows that Brazil is prioritizing science rather than politics when it comes to accepting China-developed vaccines.

Brazil's Sao Paulo state confirmed to the Global Times that the state health department and the Butantan Institute, Sinovac's Brazilian partner in the phase III trials, will release its conclusions in the clinical study of CoronaVac on Wednesday after Brazilian's National Health Surveillance Agency (Anvisa) approved the data.

A source close to Sinovac told the Global Times that the data collected from CoronaVac against COVID-19 shows "good safety."

According to Sinovac, data shows that the vaccine "is well tolerated in different age groups and can induce antibodies."

The Global Times learned that some 28,300 volunteers were enrolled in phase III trials in Brazil, Indonesia, Turkey and Chile.

The timeline for mass inoculation will accelerate after the results are released, said analysts.

The inactivated vaccine of another China's leading producer Sinopharm has a proven efficacy of 86 percent, the United Arab Emirates (UAE) health ministry said in early December, based on interim analysis of phase III clinical trials.

Sinopharm told the Global Times that it has submitted all the data from late-stage trials to the Chinese drug regulator and has been continuously improving the data analysis according to feedback.

Two inactivated COVID-19 vaccines developed by Sinopharm and Sinovac are expected by industry insiders to be the first to receive official conditional approval for use in China considering their mature techniques and the rapid development process for the vaccine that started from scratch.

Preliminary data based on phases I and II showed that CoronaVac is safe and has the capacity to produce an immune response in the body 28 days after its application in 97 percent of cases.

Anvisa on Monday granted Sinovac the Certification of Good Manufacturing Practices, a prerequisite for official vaccine registration and approval.

The clinical study was concluded with more than 13,000 participants and the data analysis was submitted and presented by the international committee.

The minimum effectiveness rate recommended by Anvisa is 50 percent, the same as Chinese and US regulators.

A Beijing-based immunologist told the Global Times on condition of anonymity that he is optimistic about the data, which would promote public acceptance of Chinese vaccines, refuting previous doubts by Western media over Chinese vaccines' safety and efficacy.

It will boost confidence in more countries to approve vaccines developed by China, the anonymous expert noted.

Tao Lina, a Shanghai-based expert on vaccines and previous employee of Shanghai disease prevention and control system, explained that as the level of spike protein, a protein on the virus which acts to fuse the virus into the host cells, is low in inactivated vaccines, it is to be expected that the efficacy of China's inactivated vaccines would be lower than protein vaccines or US giants' Pfitzer and Moderna's mRNA vaccines that contain more protein. 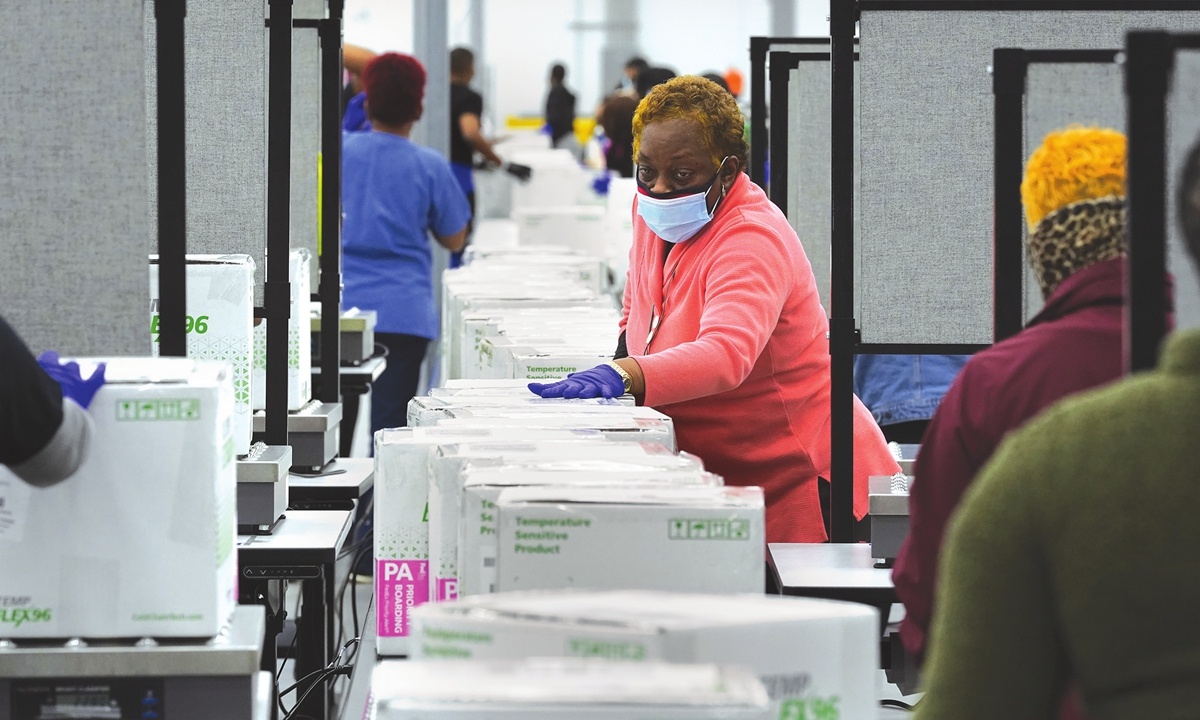 Boxes containing the Moderna COVID-19 vaccine are prepared to be shipped at the McKesson distribution center on Sunday in Olive Branch, Mississippi. The US on Saturday (local time) reported more than 400,000 coronavirus infections, creating a world new high for daily cases. (Photo: AFP)

Brazilian infectious disease specialist Dr Marcos Caseiro said that the first vaccine against coronavirus to reach the Brazilian public most likely will be the Chinese one. "The safest and most promising vaccine that we have is the Chinese vaccine which is made with the inactivated virus," said Caseiro in a local Brazilian media interview.

Despite the spate of rumors about COVID-19 vaccines circulating on local social media, many Brazilians have high expectations for the Chinese vaccines.

Natalia Pasternak, a microbiologist and president of the Institute Question of Science in Brazil, told the Global Times that she will get vaccinated as soon as it is deemed safe and effective after phase III trials are complete. She noted that Brazil has started a major publicity campaign now to raise awareness of vaccine safety and efficacy and make people confident and well informed.

However, Brazilian President Jair Bolsonaro has touted US-produced vaccines while slamming Chinese vaccines, and claimed "victory" after sudden suspension of Chinese vaccine trials in November. Pasternak suggested that Bolsonaro's remarks "certainly contributed to fake news and conspiracy theories." She criticized the opinions on Chinese vaccines as "a political divergence, but not about science."

Analysts suggest Anvisa's objective assessment of the Chinese vaccines represents a victory of science over politics in Brazil.

"I'm willing to take the vaccine because we people are spreading this disease more. We urgently need some light at the end of a tunnel. Therefore, mass vaccination is very important to common people to reduce the number of people in quarantine," Andrea Lorenzoni, a Rio de Janeiro-based Brazilian who lost two sisters to the disease, told the Global Times on Wednesday.

"If the vaccine has all the necessary approvals, no doubt I'll take it. I think that most of Brazilians are expecting the vaccine. Because it can improve the economy and make people return to [their] jobs," Neuza Meller who works as a professor at University of Brasilia, Brazil, told the Global Times.

Sao Paulo state has received two batches of CoronaVac doses from China in December to prepare for its mass inoculation campaign in January, and the federal government included CoronaVac in the national vaccination plan on December 16.