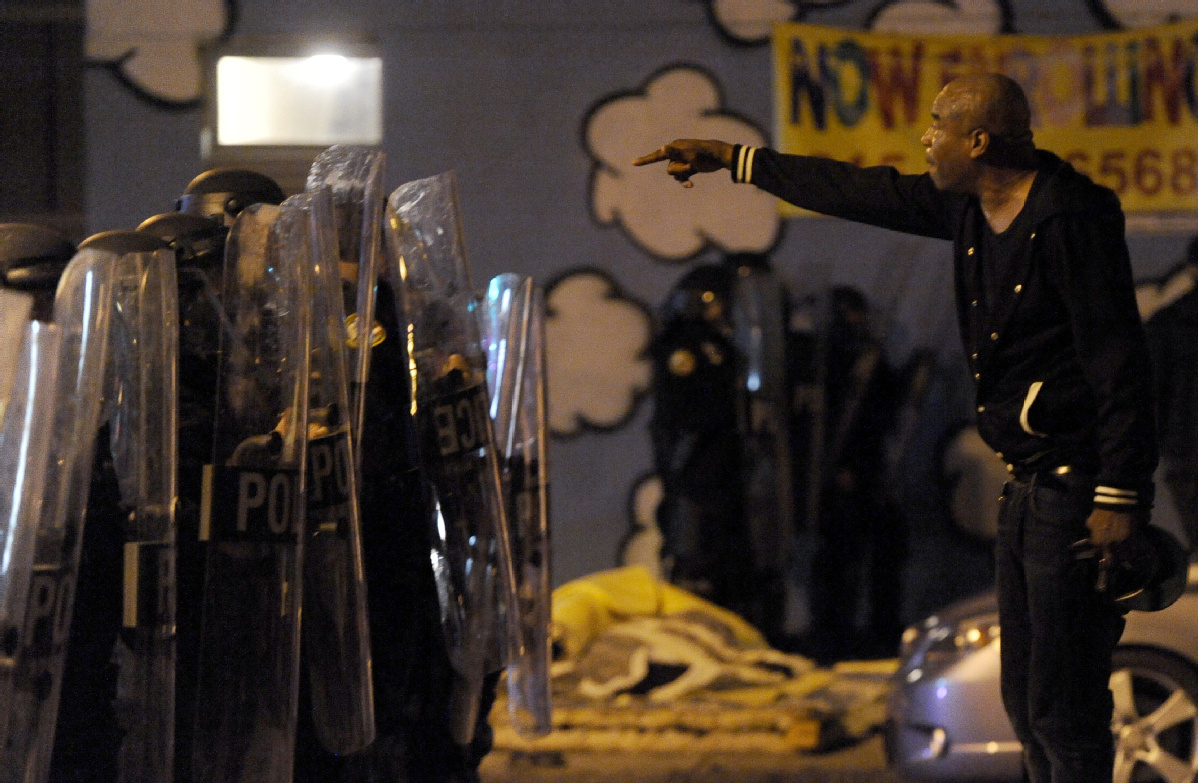 A protester faces off against police during a demonstration on Tuesday night in Philadelphia. Protesters marched in response to the death of a black man in a police shooting on Monday. (Photo: AP)

PHILADELPHIA, Pennsylvania-Tension gripped the streets of Philadelphia for a second night on Tuesday following a deadly police shooting of a black man armed with a knife and described by relatives as suffering from a mental breakdown as he was confronted by officers.

A night after violent unrest and looting in the west Philadelphia neighborhood of the US city near where 27-year-old Walter Wallace was gunned down on Monday, hundreds of demonstrators marched again demanding racial justice while police and National Guard troops braced for more disorder.

As they had on Monday, the rallies began peacefully but grew more confrontational as darkness fell, and police turned out in force to cordon off a section of the city's 52nd Street commercial district lined with shops that were looted the previous night.

Police in riot gear arriving in squad cars, on bicycles and on buses used their bikes to shove jeering protesters back from barricade lines. Aerial news footage broadcast by an NBC television affiliate also showed the looting of a Walmart store.

But Tuesday's clashes appeared for the most part smaller in scale and intensity than those on Monday, when orderly demonstrations gave way to violence that left 30 officers injured and led to more than 90 arrests.

Governor Tom Wolf, a Democrat, mobilized the Pennsylvania National Guard on Tuesday to assist law enforcement and city emergency management officials in maintaining order, a spokesman for the Guard said in a statement.

Monday's upheavals erupted hours after a bystander's video footage was posted on social media showing two officers opening fire on Wallace after he failed to heed their orders to back off and to drop the knife he was holding.

Wallace suffered from bipolar disorder, and his psychological difficulties were relayed by his wife to the officers who encountered him before the shooting, a lawyer for his family said.

And his parents said on Tuesday night that officers knew their son was in a mental health crisis because they had been to the family's house three times on Monday.

Wallace's family had called for an ambulance to get him help with the mental health crisis, not for police intervention, their lawyer said.

The Wallace family's attorney, Shaka Johnson, said the man's wife, Dominique Wallace, is pregnant and is scheduled to have labor induced on Wednesday. Johnson said Wallace had nine children－two briefly spoke at a news conference late on Tuesday.

The encounter transformed Philadelphia into the latest flashpoint in a monthslong series of protests across the United States set off by the May 25 death of George Floyd, an unarmed African American who had been handcuffed, pinned by his neck to the street under the knee of a Minneapolis police officer.

The protests, and the police response to them, have thrust the issues of racism and police conduct to the forefront of the ongoing White House race.

"Our hearts are broken for the family of Walter Wallace Jr., and for all those suffering the emotional weight of learning about another black life in America lost," former vice-president Joe Biden and his running mate, US Senator Kamala Harris, said in a joint statement.