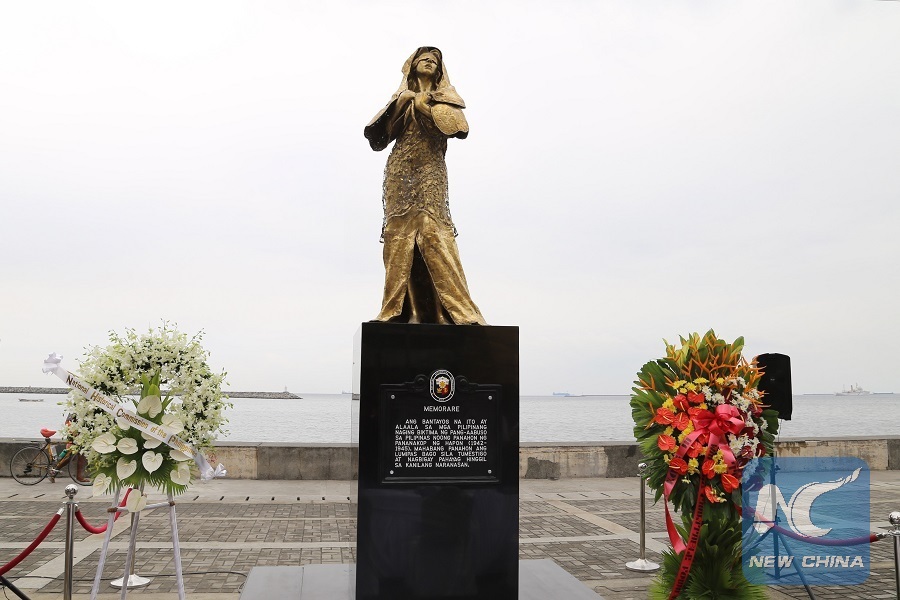 A statue representing the "comfort women" in Manila, the Philippines on Dec. 8, 2017. (Photo: Xinhua)

"Comfort women" is a euphemism for those who were forced into sexual slavery for Japanese military brothels during World War II.

The one-meter tall bronze statue of a girl seated on a chair with a vacant chair on her right was unveiled in San Pedro City on Dec. 28, 2018. The statue stands inside a private compound for elderly women abandoned by family in San Antonio village.

On Sunday, the Japanese embassy in Manila issued a statement saying the establishment of the comfort woman statue "is extremely disappointing, not compatible with the Japanese government."

Two days later, the Philippine presidential spokesman Salvador Panelo said the Laguna statue is part of freedom of expression and "appears to be simply dedicated to peace and women empowerment," adding that the statue was built inside a private property.

Lila-Pilipina, a major Philippine women's rights group, said it "objects to the attempts by the Japanese government to protest and eventually cause the removal of a one-meter statue of a girl unveiled in San Pedro city, Laguna province," according to a statement from the organization.

"While many expensive and sprawling Japanese memorials are being set up in different parts of the Philippines that honor the kamikaze bombers who murdered thousands of Filipinos, we are enraged that simple shrines for our suffering comfort women are being denied and made bargaining chips for financial development aid," said Sharon Silva, executive director of Lila-Pilipina.

A kamikaze pilot statue stands at the Kamikaze East Airfield Peace Memorial in Pampanga province north of Manila. The airfield was built by the local government in 1998. On a pedestal stands a life-size figure of a kamikaze pilot, aimed at memorizing the Japanese World War II fighter pilots. The site has become popular destinations for Japanese visitors to the Philippines.

Lila-Pilipina is an organization of Filipino comfort women fighting for recognition, apologies and reparations from the Japanese government for its sexual slavery crimes against numerous women across Asia.

The group is also campaigning for the restoration a comfort woman statue, a two-meter bronze sculpture of a blindfold, grieving woman in Maria Clara traditional Filipiniana gown, that was erected in December 2017 a few kilometers from the Japanese embassy in Manila.

Japan also protested the erection of that statue, forcing the Philippines to take the statue down in April last year.

The unveiling of the first comfort woman statue took place 76 years after the Japanese invasion of the Philippines that started on December 8, 1941, 10 hours after the attack on Pearl Harbor.

Silva said the statue put up by private citizens and former town officials was dedicated to peace and women empowerment and deserves support from peace movements in the country and Asian nations who suffered tremendously from the Japanese imperial occupation.

The Japanese occupation of the Philippines occurred between 1942 and 1945.

Hundreds of thousands of women from around Asia, including China, South Korea, Indonesia and the Philippines, among others, were abducted and forced to work in Japanese wartime military brothels during World War II.

In the Philippines, there are more than 200 who came out in the open in the 1990s to tell their harrowing experience with the Japanese military. There are only about 20 of them alive now, mostly in their 80s and sick.

Like other Asian comfort women, the Filipino comfort women also demand an official apology from the Japanese government, compensation and inclusion of the comfort women issue in Japan's historical accounts and textbooks.