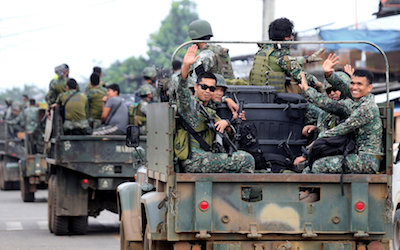 Member of the Philippine Marine Battalion Landing Team (MBLT) wave at residents and motorists while in a military truck as they travel their way back from their five-month combat duty against pro-Islamic State militant groups, a few days after President Rodrigo Duterte announced the Liberation of Marawi city, southern Philippines October 21, 2017. (Photo:VCG)

CLARK, the Philippines, Oct. 23 (Xinhua) -- Philippine Defense Secretary Delfin Lorenzana announced on Monday the "termination of all combat operations" in the southern Philippine city of Marawi, saying the city has been cleared of the last terrorists.
"There are no more militants in Marawi," Lorenzana told reporters in Clark during a meeting of regional defence ministers.
President Rodrigo Duterte last week announced that the city has been "liberated from terrorist influence" following the killing of extremist leaders Isnilon Hapilon and Omarkhayam Maute.
More than 1,000 people, mostly rebels, were killed in the 153-day fighting and the heart of the city of 200,000 people has been leveled by air strikes.
Armed Forces chief General Eduardo Ano said Monday at least 42 bodies of rebels had been found in two buildings and a mosque in the battle zone.