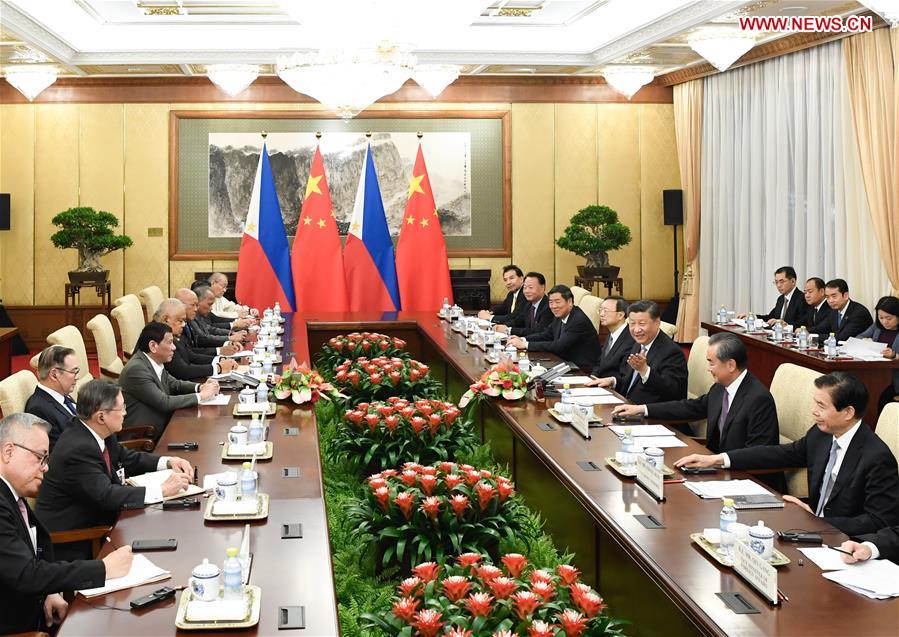 Philippine Department of Trade and Industry said in a statement that during the bilateral meeting between Philippine President Rodrigo Duterte and Chinese President Xi Jinping in Beijing on Thursday, President Xi said that China will buy more goods especially agriculture and agri-based product from the Philippines.

Both leaders also agreed to advance cooperation in many fields, including trade and investments, infrastructure and finance, education, agriculture, science and technology, security, and work against transnational crimes and illegal drugs, read the statement.

Speaking highly of China's commitment as "encouraging words," the Philippine Trade and Industry Secretary Ramon Lopez said in the statement that Philippine exports to China have been growing at an average of 10 percent in the last three years.

According to the Philippine Statistics Authority, China is now the Philippines' top trading partner, the largest source of imports and the fourth largest export market.

"The momentum of Chinese investments has been very positive as foreign direct investments (FDI) from China grew six times more in the last three years," he said.

Lopez said more big-ticket projects are on the way especially in manufacturing both in heavy industries like petrochemical, iron and steel, as well as light industries like textile, construction, technology-based services, agribusiness, energy, power, transportation, infrastructure, and tourism.

"(Duterte's) visit here in China is a reflection of continued good faith and warm friendship between the two presidents, and undoubtedly, a testament to the enhanced and enduring bond between the Philippines and China," the Philippine Presidential Spokesman Salvador Panelo said.