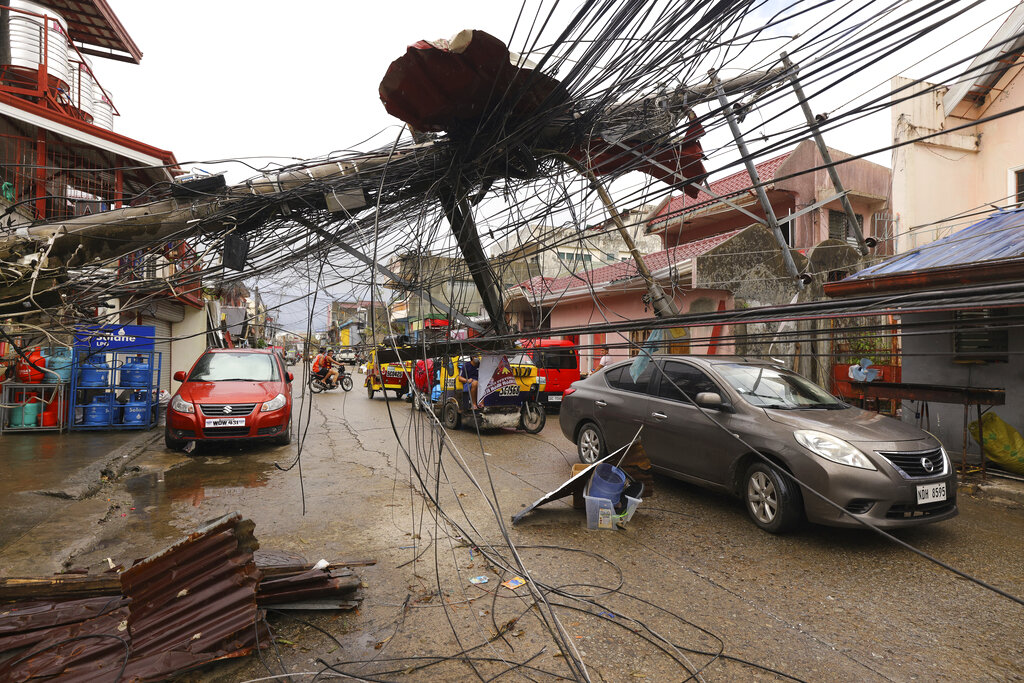 In this photo provided by Greenpeace, cars pass by a toppled electrical post due to Typhoon Rai in Surigao city, Surigao del Norte, southern Philippines as power supply remain down on Sunday Dec. 19, 2021. (Photo: AP)

The governor of a central Philippine province devastated last week by Typhoon Rai pleaded on radio Tuesday for the government to quickly send food and other aid, warning that without outside help, army troops and police would have to be deployed to prevent looting because of growing hunger.

Governor Arthur Yap of Bohol province said he could no longer provide rice and other food aid after his contingency fund ran out and that many of the 1.2 million people in his island province, which remained without power and cellphone service five days after the typhoon struck, have become increasingly desperate.

The most powerful typhoon to hit the Philippine archipelago this year left at least 375 dead and more than 50 missing, mostly in the central region, including nearly 100 dead in Bohol, according to officials.

President Rodrigo Duterte visited Bohol over the weekend to see the extensive devastation. Yap said the government's social welfare department promised to send 35,000 food packs, an inadequate amount for the province's 375,000 families, but even those have not yet arrived.

In an interview on DZBB radio network, Yap thanked Duterte for visiting his province but said, "If you would not send money for food, you should send soldiers and police, because if not, lootings will break out here."

Some looting mostly of small merchandise stores have occurred, Yap said, adding that the situation remained under control. But he warned that the looting could worsen if people, especially in hard-hit island municipalities, grow more desperate. People cannot withdraw money from banks without cellphone connections and power, and fuel and water shortages have also sparked long queues, he said.

The national police said widespread looting was not a problem in typhoon-ravaged regions and added that they were ready to deal with any lawlessness.

Typhoon Rai packed sustained winds of 195 kilometers (121 miles) per hour with gusts of up to 270 kph (168 mph) at its most lethal point before blowing out into the South China Sea on Friday. At least 375 people were killed, mostly by falling trees and in flash floods, with 56 others missing and 500 injured, according to the national police. But the toll may still increase as emergency crews restore communications and power to more towns and villages.

Nearly a million people were lashed by the typhoon, including more than 400,000 who had to be moved to emergency shelters as the typhoon approached. Some have begun to return home but others either lost their houses entirely or need to do major repairs.

Emergency crews were working to restore electricity in 227 cities and towns, officials said Monday, adding that power had been restored in only 21 areas so far. Cellphone connections have been restored in at least 106 of more than 130 cities and towns. Two local airports remained closed Monday except for emergency flights, but most others have reopened, the civil aviation agency said.

The Philippines has not appealed for international help but Japan said it was sending power generators, camping tents, sleeping pads, water containers and tarpaulin roofing sheets to hard-hit regions, while China announced it was providing 20,000 food packs and rice.

About 20 tropical storms and typhoons annually batter the Philippines, which also lies along the seismically active Pacific "Ring of Fire" region, where earthquakes and volcanic eruptions frequently occur, making the Southeast Asian nation of more than 100 million people one of the world's most disaster-prone countries.