MANILA, Feb. 18 (Xinhua) -- It is about time that the Philippines stands on its own two feet instead of depending on other countries for military training, the Philippine military chief has said. 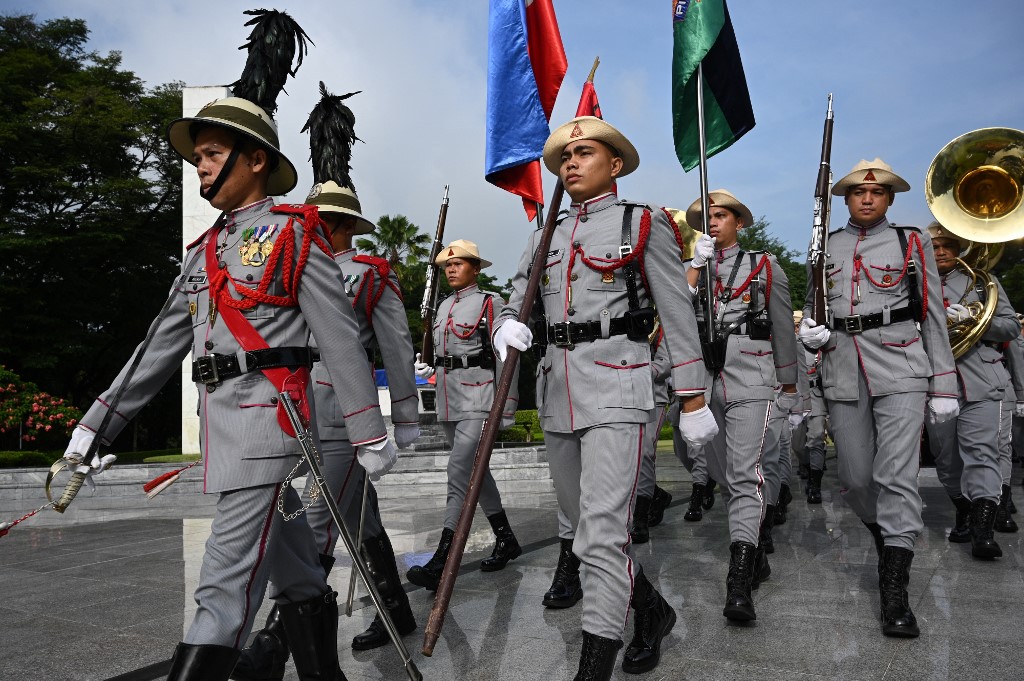 Philippine honour guards march past the Tomb of the Unknown Soldier after a wreath-laying ceremony to commemorate National Heroes' Day at the Heroes Cemetery in Manila on August 26, 2019. (File photo: AFP)

"As an Armed Forces of the Philippines (AFP), we should be able to stand alone," AFP Chief of Staff Lieutenant General Cirilito Sobejana said in a television interview on Wednesday night.

Sobejana was reacting to abolishing the Visiting Forces Agreement (VFA) with the United States, an agreement signed in 1998 that allows American troops to come to the Philippines for joint military exercises with Filipino soldiers and humanitarian missions.

He said the AFP "should be on top of the situation always."

"It is just a matter of allocating what we have, optimizing the utilization of our resources to make things happen, to solve problems, and achieve long and lasting peace and progress," he added.

Sobejana said the VFA is merely for both forces' training, adding the Americans are not involved in combat operations.

Philippine President Rodrigo Duterte has demanded the US government "pay" if it wants to keep the VFA.

"I would like to put on notice if there's an American agent here that from now on, you want the Visiting Forces Agreement done? Well, you have to pay," Duterte said last week in a speech at the Clark Air Base in Pampanga, north of Manila.

"It's a shared responsibility, but your share of responsibility does not come free because after all, when the war breaks out, we all pay," Duterte added.

It was not the first time Duterte made the threat to end the VFA.

In December last year, Duterte threatened to scrap the VFA if the United States could not provide the Philippines with COVID-19 vaccines.

Duterte ordered the agreement's abrogation last year but decided to suspend the move.

The VFA governs the conduct of US armed force personnel who come to the Philippines to take part in approved training and other activities, including but not limited to exercises related to the 1951 Mutual Defense Treaty.

The Philippines and the United States signed in 1998 a VFA allowing joint Philippine-US military training operations. The Philippine Senate ratified the agreement in 1999, seven years after the closure of the last US military base on Philippine territory.