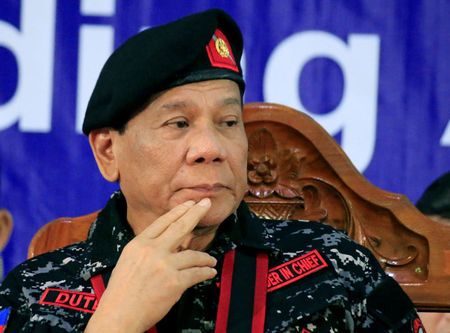 Philippine soldiers have killed 14 anti-government guerrillas in an offensive south of the capital, Manila, an army officer said on November 29, days after President Rodrigo Duterte ended peace talks with the rebels.

More than 40,000 people had been killed in nearly 50 years of fighting between the leftist guerrillas and government forces, a conflict that has stunted economic growth in resource-rich rural areas.

Duterte, who took power last year, had raised hopes for peace with the communists as well as with Muslim insurgents in the south of the predominantly Roman Catholic country, but peace has proved elusive.

"This is a big blow to their organization," Major Mikko Magisa, executive officer of the army's 202nd Brigade, told reporters, referring to the late Tuesday clash in Batangas province.

Five soldiers had been wounded in the 20-minute clash involving army and air force commandoes, he said.

The bodies of 13 rebels were found, including a suspected secretary and a platoon leader of the guerrilla unit, he said. One of two wounded rebels who were captured died in hospital.

Duterte signed a proclamation ending peace talks with the communists last week after complaining that rebel violence had continued during the negotiations.

Talks, which have been held intermittently since 1986, were revived in August last year, and were brokered by Norway.

Government troops have been ordered to be on alert for movements by the estimated 3,800 leftist guerrillas, military officials have said.

Government troops have in recent months been engaged in the biggest battle in the Philippines since World War Two, with Islamist militants who occupied a southern town for several months.