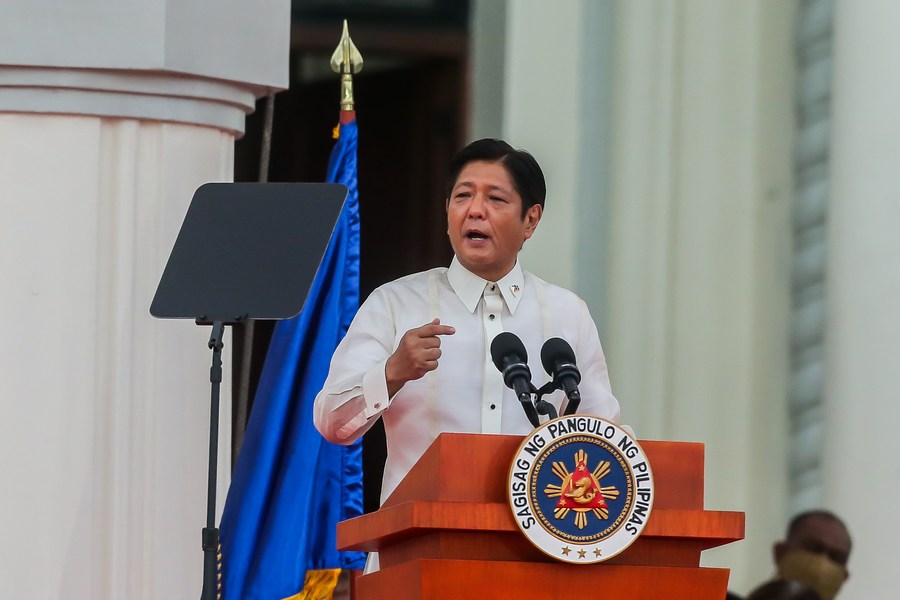 Ferdinand Romualdez Marcos was sworn in on Thursday as the 17th President of the Philippines, officially starting his six-year term leading a nation grappling with the challenges of the COVID-19 pandemic, rising commodity prices and high fiscal deficit.

The 64-year-old alluded to "troubling times" in a speech he delivered shortly after he was sworn into office at the National Museum of Fine Arts in the capital Manila.

Widely known as "Bongbong" Marcos, the son of former president Ferdinand Marcos said the new administration is drawing up a comprehensive, all-inclusive plan for economic transformation, putting the country's growth trajectory back on track after it was reined in by the pandemic in the past two years.

"Following these giant steps, we will continue to build (infrastructure). I will complete on schedule the projects that have been started. I am not interested in taking credit, I want to build on success that's already happening," he said.

Ruben Carlo Asuncion, chief economist at the Union Bank of the Philippines, welcomed Marcos' commitment to continue the Build, Build, Build program, as infrastructure is needed for economic rebound. He is hoping that Marcos will give more details about his plan in his first State of the Nation Address that he will deliver at the opening of the 19th Congress in July.

Marcos won the May elections with 31 million votes, making him the first majority president since 1986.

"The rich world talks a great deal, but does a lot less about it than those with much less, but have suffered more death and destruction from climate change and lack of adaptation," Marcos said.

His government will look for partners who will help the Philippines, which "despite having a very small carbon footprint is at the highest risk" from the impact of climate change.

Renato Redentor Constantino, executive director of the Institute for Climate and Sustainable Cities in Manila, said Marcos' decision to prioritize the country's response to climate change "reflects the broader lens used by his leadership".

But he said the colossal challenge that the Marcos government will have to face is "investor confidence and predictability of policies and market signals".

Marcos said in his speech that the Russia-Ukraine conflict has threatened food security, noting that "the most vulnerable when it comes to food are the countries farthest away from the conflict－those bearing no blame for provoking it. Yet, they face the biggest risk of starvation".

Enrico Gloria, assistant professor for political science at the University of the Philippines, said Marcos' decision to take over the agriculture portfolio may be influenced by current disruption of the global food supply and rising food prices.

"The Philippines is not alone in that concern," Gloria said, alluding to how the conflict has spiked food prices. By heading the Department of Agriculture, Gloria said this might be Marcos' way of "being on top of the impending food security crisis" that will be caused by the ongoing conflict.