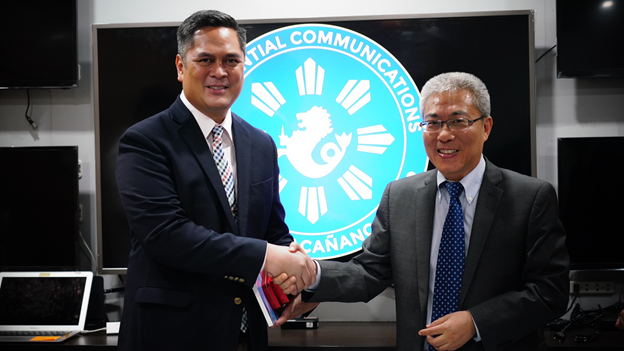 Manila, (People’s Daily) - The Philippine and Chinese government sought to sustain cooperation in the media and communications industry as relations between the two countries continue to strengthen.

Martin Andanar, the secretary of the Philippine Presidential Communications Operation Office (PCOO), said he hopes to maintain the good relationship between China's government-owned media outfits and the Philippine media, during the China Media Group's (CMG) courtesy visit on Thursday, November 7 at the Philippine Information Agency headquarters in Quezon City.

“The cooperation between the Philippine media and Chinese media escalated to levels unheard of,” he said.

The PCOO chief also expressed gratitude for the fair coverage of developments in the Philippines by CMG-member outlets such as China Central Television (CCTV), China Global Television Network (CGTN), and China Radio International (CRI). “We are very grateful for the commitment of CMG. I experience very good coverage from CCTV, CRI, whenever I go [to] different parts of the world,” he said.

Andanar also attributed the good coverage to the close relationship forged between the two countries under the Duterte administration. “The relationship of the Philippines and China has elevated to a new level since President Duterte was elected into office,” he said.

Meanwhile, the CMG delegation, led by Huang Chuanfang who is a member of its editorial board, thanked the Philippine government for supporting their journalists when seeking requests for interviews, helping to give them deeper understanding on local issues.

“We saw our reports by our journalists in the Philippines from CCTV and CRI. From their reports, which are very newsworthy, [they] show us that they have a deeper understanding,” he said.

The PCOO currently has multiple bilateral agreements with the Chinese government in the media and communications sector such as personnel exchanges, workshops, seminars, information exchanges, rebroadcasts, joint production, and mutual visits.

Huang also looks forward to more exchanges in new media. “Besides the news exchanges and the film cooperation, we expect to have more cooperation in the radio and new media,” he said.

“We will promote the cooperation between the Philippine media and Chinese media. We are looking forward to working with you,” Huang added.