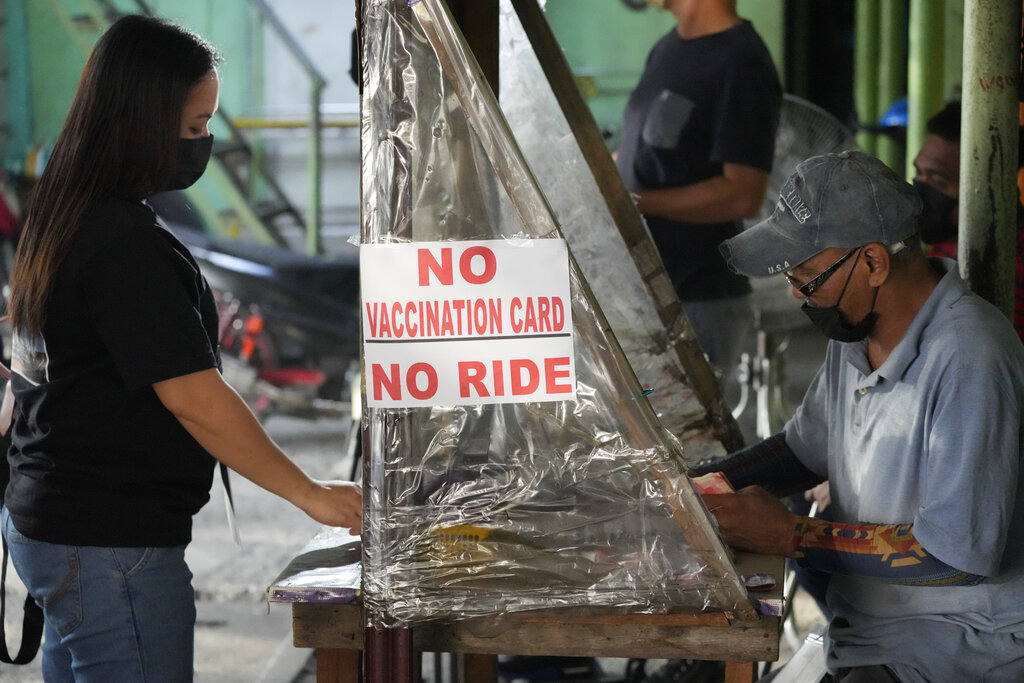 A woman stands beside a sign to remind passengers to show their vaccination card before riding at a jeepney terminal in Quezon city, Philippines on Monday, Jan. 17, 2022. (Photo: AP)

The Philippines will lift a ban on the entry of foreign tourists and businesspeople next month after nearly two years, in a move to revive the battered tourism industry as the latest coronavirus outbreak started to ease, officials said Friday.

Tourism Secretary Berna Romulo-Puyat said the country will reopen its doors to travelers from more than 150 countries with visa-free privileges starting Feb. 10. Foreign travelers will no longer be required to quarantine in government-designated centers upon arrival if they have been fully vaccinated and tested negative prior to arrival, officials said.

The government had initially planned to lift the ban on Dec. 1 but indefinitely postponed it as the more contagious omicron variant spread, which also prompted authorities to reimpose tighter restrictions.

President Rodrigo Duterte warned that unvaccinated Filipinos who defy orders to stay at home could face arrest. Commuters who have not been immunized were also prohibited from public transport in the capital region of more than 13 million people unless on urgent errands, for at least up to the end of the month. The decision has sparking protests from human rights and labor groups. The number of daily infections has dropped considerably in the capital in recent days.

"We're done with border control," Health Undersecretary Rosario Vergeire told a news conference, adding that government focus has shifted to preventing community transmission of the omicron variant, which has caused five deaths in the country so far.

"We are also aware that there is no room for complacency given the unpredictability of the virus," Puyat said. "We will closely monitor the situation and ensure that health and safety protocols are strictly implemented in all tourism establishments."

The number of tourists dropped by more than 6 million, and more than a million Filipinos lost their jobs in tourism businesses and destinations in the first year of the pandemic alone, according to government statistics. Tourism destinations, including popular beach and island resorts, resembled ghost towns at the height of pandemic lockdowns.

The Philippines has reported more than 3.5 million confirmed COVID-19 infections, with 53,801 deaths, the second-highest totals in Southeast Asia after Indonesia.