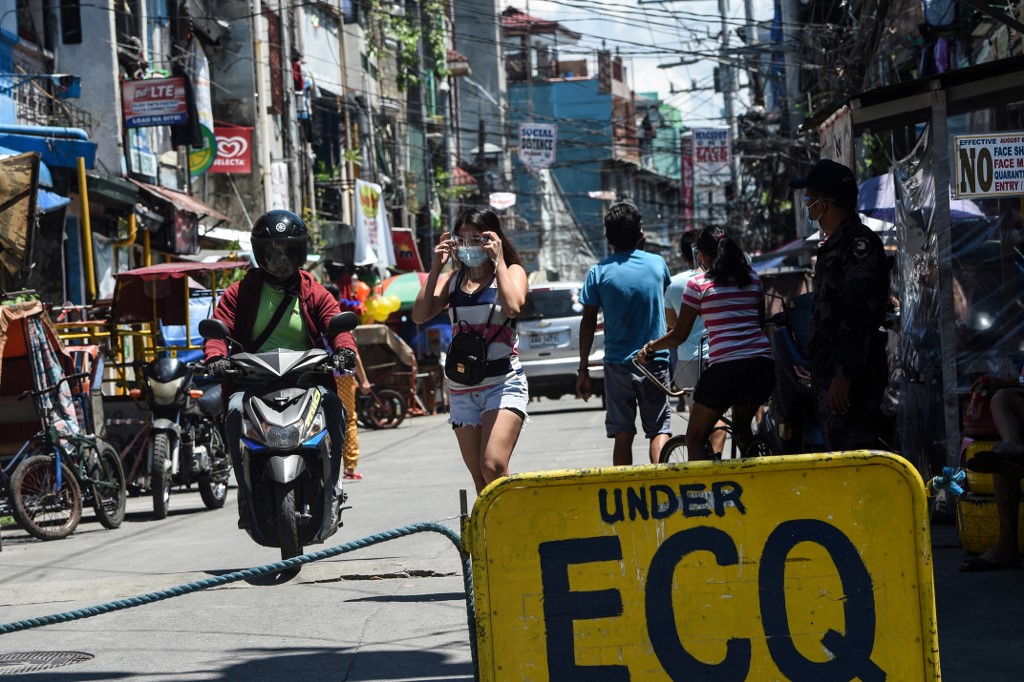 A policeman (R) monitors people at the entrance to a neighbourhood under strict quarantine measures in Pasay City, suburban Manila, on March 16, 2021. (File photo: AFP)

The death toll climbed to 12,992 after 20 more patients died from the viral disease, the DOH added.

The recent surge in the number of cases has compelled the government to reimpose quarantine restrictions in Metro Manila and four adjacent provinces since Monday to slow down the country's virus infections without constraining the people's overall mobility.

Philippine President Rodrigo Duterte said the economy will remain open while the two-week quarantine measures are enforced, stressing the need to balance health and the economy.

Duterte said in his weekly televised public address Monday night that imposing a total lockdown would spell "disaster" for the country.

"The economy, which is already out of shape, will suffer if you shut down all the businesses, and that's a problem. It will be a disaster for the country, so we need to balance things for now," Duterte said.

"A careful and calibrated approach is needed to address the sources of highest risks through localized quarantines and additional restrictions, so that jobs or livelihoods will not be affected," Chua said in a televised press conference on Tuesday.

"We will do all of this while ensuring that majority of the people can still safely work, earn a living, and access basic services while adhering to minimum health and safety standards," Chua said.

The Philippines has been in varying quarantine levels over the past year when the government imposed a lockdown in mid-March.

As a result, Chua said an estimated 16.4 million people have experienced hunger nationwide.

In Metro Manila alone, he said 3.2 million or one in four people are hungry. There are also 506,000 jobless people in the capital, he added.

Metro Manila, home to about 13 million people, is the epicenter of the outbreak.

Chua said the quarantine restrictions and the fall in consumption translate to a total income loss of around 1.04 trillion pesos (21 billion US dollars) in 2020 or an average of 2.8 billion pesos (57.6 million U.S. dollars) a day.

The Philippine economy shrank 9.5 percent in 2020 due to the prolonged impact of the global pandemic.