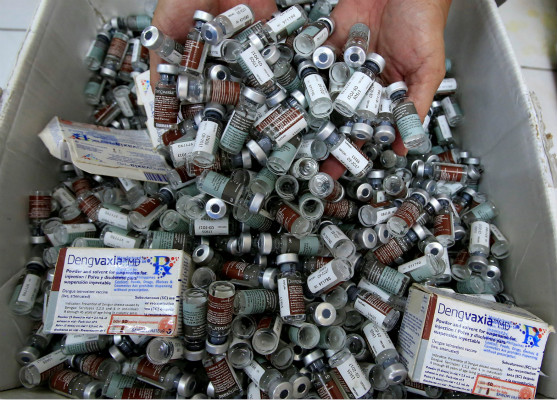 The Philippines ordered a probe on Monday into the immunization of more than 730,000 children with a vaccine for dengue that has been suspended following an announcement by French drug company Sanofi that it could worsen the disease in some cases.

A non-governmental organization in the Philippines said it had received information that three children who were vaccinated with Dengvaxia in April 2016 had died, but Sanofi said no deaths had been reported as a result of the program.

"As far as we know, as far as we are made aware, there are no reported deaths that are related to dengue vaccination," Ruby Dizon, medical director at Sanofi Pasteur Philippines, told a news conference in Manila.

Last week, the Philippines' Department of Health halted the use of Dengvaxia after Sanofi said it must be strictly limited due to evidence it can worsen the disease in people not previously exposed to the infection.

In a statement issued in the Philippines, Sanofi explained the "new findings" but said the long-term safety evaluation of the vaccines showed significantly fewer hospitalizations due to dengue in vaccinated people over 9 years old compared with those who had not been vaccinated.

Nearly 734,000 children aged 9 and over in the Philippines have received one dose of the vaccine as part of a program that cost 3.5 billion pesos ($69.54 million).

The Department of Justice on Monday ordered the National Bureau of Investigation (NBI) to look into "the alleged danger to public health ... and if evidence so warrants, to file appropriate charges thereon."

There was no indication that Philippines health officials knew of any risks when they administered the vaccination.

However, the World Health Organization said in a July 2016 paper that "vaccination may be ineffective of may theoretically even increase the future risk of hospitalized or severe dengue illness in those who are seronegative at the time of first vaccination regardless of age."

Singapore's Health Sciences Authority said last week that it flagged risks when the vaccine was approved there in October 2016, and was working with Sanofi to strengthen risk warnings on the drug's packaging.

According to Sanofi in Manila, 19 licenses were granted for Dengvaxia, and it was launched in 11 countries, only two of which – the Philippines and Brazil – had public programs to administer the vaccine.

A spokesman for Philippines President Rodrigo Duterte said on Sunday the government would hold to account those responsible for a program that had placed thousands of lives at risk.

"We will leave no stone unturned in making those responsible for this shameless public health scam which puts hundreds of thousands of young lives at risk accountable," spokesman Harry Roque said in a statement.

Roque said there had been no reported case of "severe dengue infection" since the vaccine was administered and called on the public "not to spread information that may cause undue alarm".

However, Volunteers Against Crime and Corruption said it was checking a report that three children on the northern island of Luzon had died since being vaccinated in April 2016 and described the situation as a disaster.

"We have received information from our coordinator in central Luzon that three children have died," the group's chairman, Dante Jimenez, told reporters.

"I'm still having it verified, the names. If ever, they have already been buried ... we're asking the NBI to conduct an exhumation. This is really serious."

Dengue is a mosquito-borne tropical disease. Although it is not as serious as malaria, it is spreading rapidly in many parts of the world, killing about 20,000 people a year and infecting hundreds of millions.

While Sanofi's Dengvaxia is the first-ever approved vaccine for dengue, scientists already recognized it was not perfect and did not protect equally against the four different types of the virus in clinical tests.

A new analysis from six years of clinical data showed that Dengvaxia vaccine provides persistent protective benefit against dengue fever in those who had prior infection.

But for those not previously infected by the virus, more cases of severe disease could occur in the long term following vaccination upon a subsequent dengue infection, Sanofi said.