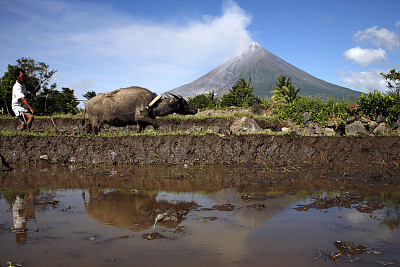 The Philippines volcanology institute on Sunday further raised the alert level for the Mayon Volcano from level one to level two, indicating that the volcano is exhibiting signs of "increasing unrest" that may trigger more ash falls, rockfalls and landslides.

According to a bulletin released by the Philippine Institute of Volcanology and Seismology (Phivolcs) on Sunday at 00:30 a.m. local time, level one of the alert is "abnormal" and level two is "increasing unrest."

A few hours after Phivolcs raised the alert level, the volcano erupted anew at 8:49 a.m. on Sunday, lasting for about five minutes.

"This means that current unrest is probably of magmatic origin, which could lead to more phreatic eruptions or eventually to hazardous magmatic eruptions," the Phivolcs said in its latest bulletin released on 10:50 a.m. local time.

"The second phreatic eruption produced a greyish steam and ash plume that was largely obscured by summit clouds," the institute said, adding that a strong smell of sulfur pervaded affected areas.

Rumbling sound can also be heard, the institute said.

Martin Andanar, the secretary of the Presidential Communications Operations Office, said on Sunday morning that the public near the volcano to stay vigilant and desist from entering the 6-km radius of the volcano.

Andanar also told the residents directly affected by the eruption to cooperate with the local governments to avoid injuries or casualties.

Phivolcs warned pilots to avoid flying close to the volcano's summit as ash from the sudden eruption can be hazardous to aircraft.

Mountain Mayon, one of the most active Philippine volcanos, famous for its beauty and near-perfect symmetry, is in Albay province on the Philippine main Luzon Island, more than 300 km southeast of the Philippines capital Manila. It has an elevation of 2,462 meters.

On Saturday, the institute reported the famous volcano "generated a phreatic eruption (steam-driven) that propelled a grayish steam and ash plume approximately 2,500 meters high that was drifted to the southwest."