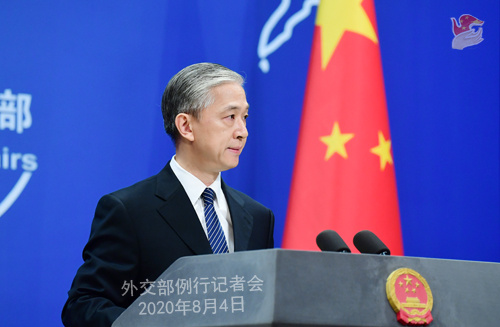 The Philippines' decision not to participate in joint military exercises in the South China Sea has shown attempts of countries outside the region to stir up trouble and create tensions in the area are against the will of countries in the region, Foreign Ministry spokesman Wang Wenbin said on Wednesday.

Philippine Defense Secretary Delfin Lorenzana on Monday said the Philippines would not join navies of other countries, including the United States, in maritime drills in the South China Sea for fear of raising tensions in the area, Philippine media outlet Inquirer reported.

Such remarks again reflected the independent diplomacy pursued by the Philippines, and also reflect the common aspirations of regional countries to seek peace and promote development, Wang said at a daily news conference.

China and ASEAN members are focusing on the fight against the COVID-19 pandemic and economic recovery, he said, adding what they need is solidarity, cooperation, peace and stability.

China has the confidence to work with countries in the region to overcome the challenge of the pandemic, maintain the good momentum of regional development and safeguard the common welfare of the peoples in the region, he said.

Also on Wednesday, Wang said China welcomes companies from various countries including Europe to invest and operate in the country, and will unswervingly deepen reforms and expand opening-up.

Joerg Wuttke, president of the European Union Chamber of Commerce in China, said on Tuesday the measures taken by China to cope with the coronavirus are effective, and enterprises from the EU are still confident in their development in China.

A June survey by the chamber showed European companies overall remain strongly committed to China, which remains a top three investment destination for 63 percent of respondents.

"Companies from Europe and other parts of the world are all part of China's story of development", he said, adding they will continue to achieve mutual benefit through their operation in China.

As of 2019, the EU has been China's largest trading partner for 16 consecutive years, and bilateral trade volume exceeded $700 billion last year, Wang said.