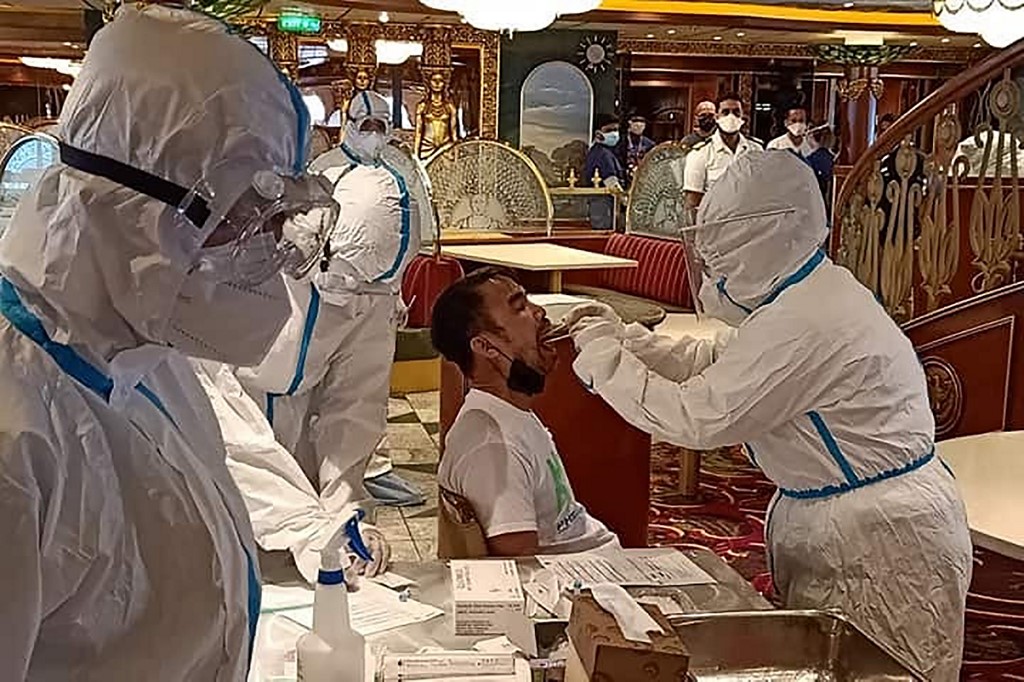 This handout photo taken in May 2020 and received from the Philippine Coastguard on July 15 shows coastguard personnel taking swab samples from a Filipino crew aboard onboard of the cruise ships anchored at Manila Bay. (Photo: AFP/PHILIPPINE COASTGUARD)

The lockdown will start midnight of Aug. 4 and last until Aug. 18.

In a briefing on Sunday night, Duterte said the National Capital Region will be put under the "moderate enhanced community quarantine" (MECQ), along with the provinces of Cavite, Laguna, Rizal and Bulacan where there are significant community transmissions.

The decision to tighten the rules over Metro Manila came after Duterte met several members of the Cabinet on Sunday night to discuss the appeal of health workers to place the capital under a stricter lockdown following the spike of cases.

Metro Manila, the epicenter of the outbreak, consistently records the highest number of COVID-19 cases since the disease emerged in the country in January.

Under MECQ, all people are mandated to stay at home. Only limited outdoor exercise is allowed such as outdoor walk, jogging and biking with safety protocols. Gathering is only limited to five people. No public transport is allowed to operate, school premises will remain closed and work from home is highly encouraged.

On Saturday, health workers from different medical organizations wrote Duterte a letter to air their sentiments about the COVID-19 situation in the country. The health workers said that the country's health care system has been overwhelmed, with hospitals temporarily closed to decongest and health workers falling ill.

The health workers also stressed in the letter that the country needs to "come up with a consolidated plan" because it is in a "losing battle against COVID-19."

The Philippines has reported a total of 103,185 confirmed COVID-19 cases, with 2,059 deaths and 65,557 recoveries, according to the Department of Health on Sunday.