WORLD Picking up the pieces a year after Mexico's earthquake

Picking up the pieces a year after Mexico's earthquake 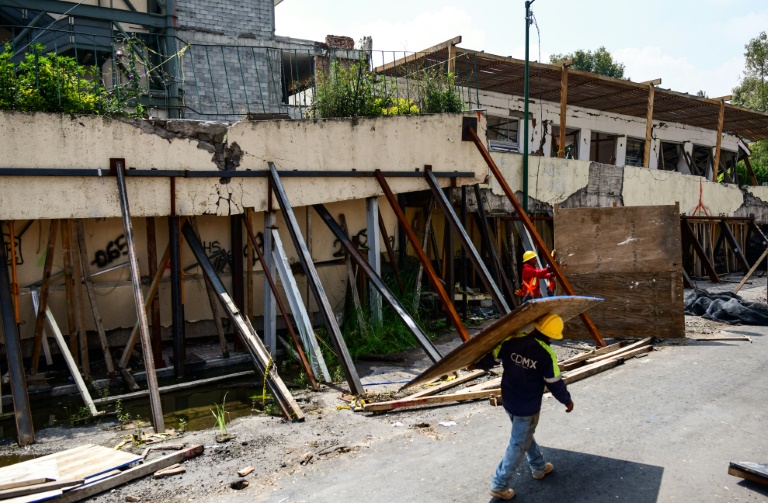 One year after a 7.1-magnitude earthquake devastated Mexico, killing 369 people, here are five stories of those still sorting through the rubble it left behind.

He was one of 19 children killed when the Rebsamen elementary school collapsed last September 19.

One year later, Rodriguez, 37, is searching for a job and struggling with her loss.

A single mother, she had built her whole life around her only child.

When he was born, the former business manager opened a pharmacy so she could set her own schedule and spend more time with him.

But she had to close it after he died, she told AFP.

"My customers knew my son. I could tell they felt bad for me. And eventually they just stopped coming," she said.

Today, she spends her time however she can.

She and other parents have pressed charges against the private school's fugitive owner, who had illegally built an apartment for herself on top of the building -- fatally destabilizing it, according to experts.

After a year of counseling, she has started learning to let go of Jose Eduardo's things. She has kept a few favorites: toys, pictures, videos.

"Would I want to have more children? No. I fulfilled my mission as a mom. My whole being was for him," she said.

"I don't think another child, a new soul, would like to see his mom the way I am now."

With her protective goggles and booties, Frida the dog was the most celebrated hero of the search-and-rescue effort.

Using her powerful nose to find life in the rubble, she became a symbol of hope amid the destruction.

Today, she is immortalized in stuffed toys, a statue and several giant murals across Mexico City.

But at nine years old, her golden fur starting to gray, she is nearing the end of her career with the Mexican marines.

At a recent training session, a marine threw himself to the ground, shouting, "Frida, come find me!"

She gamely did her job -- but soon lay down panting.

"You can see it in her face. She looks bored, a little tired. Nine is old for a rescue dog," said her handler, Corporal Israel Arau Salinas.

Frida spent much of the past year attending TV appearances, photo shoots and events in her honor.

Now close to retirement, she has worked her last disaster.

She found 12 people alive beneath the rubble in her career, and the remains of 41 victims.

Irma Escamilla has spent the past year living in an improvised wooden hut.

It sits amid a sea of ramshackle dwellings near the collapsed and badly damaged buildings of the Tlalpan housing project, on the south side of the capital.

The 46-year-old teacher and mother of three has all her worldly belongings inside this little house: a handmade cot and bed, some donated clothes, a bookshelf, a table and a few appliances.

"We evacuated with nothing but the clothes on our backs," she told AFP.

"We had to start from scratch."

She quit her job after the quake, afraid to leave her nine-year-old daughter alone all day in the camp.

She received welfare checks for five months, and her estranged husband sends her some money.

The couple separated in the aftermath of the disaster.

"That was my second earthquake," she said.

It will take another 10 months to repair her badly damaged building, engineers say.

"It's a very painful situation. We just want to go home," she said.

Guadalupe Vazquez's living room wall was one of the most iconic images of the disaster.

The quake ripped her apartment building in two, leaving Vazquez's second-story wall visible from the street, complete with her family photos.

About a month after the quake, Vazquez told AFP she wanted just one thing: to get back those sepia-toned pictures of her daughters.

But the building was so fragile the authorities were reluctant to let anyone inside.

It ended up being the first building torn down.

But Vazquez did manage to get her pictures back, the spry octogenarian -- a former mountain climber -- said when AFP caught up with her.

Now renting a small room nearby, her next wish is for a new home.

Xochilt de la Paz lost her mother and her business in one devastating blow.

The earthquake brought down her hair salon, with her mother inside it.

But with a 12-year-old son to raise, she had little time to feel sorry for herself.

With nothing but a parasol to protect her from the elements, she braved the wind and rain to keep styling her clients' hair.

"This is how I support my son," she told AFP.

"It's a situation you just have to rise above."