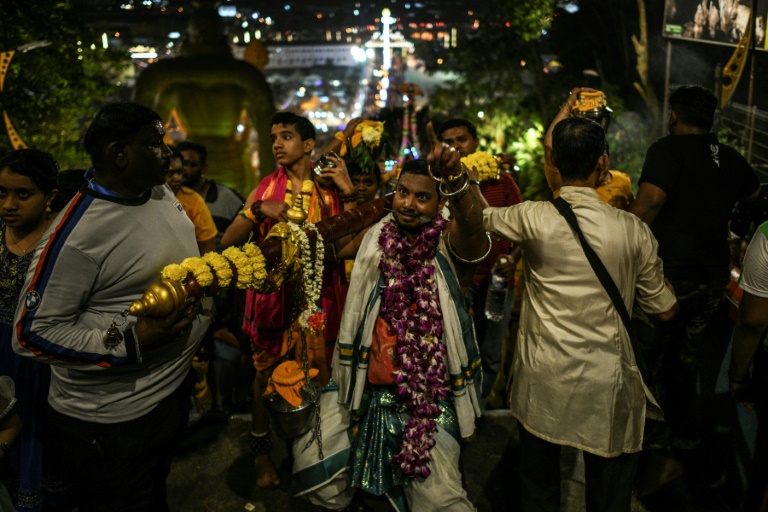 Hundreds of thousands of Malaysian Hindus, some piercing their skin with hooks and skewers to show their devotion, gathered in temples across the country on Monday to mark Thaipusam.

The annual Hindu festival sees believers carry offerings to places of worship to the deity Murugan and marks the day when his mother -- the goddess Parvathi -- gave him a powerful lance to fight demons.

It is observed mainly in countries with significant populations of ethnic Tamils -- descended from people who originally came from southern India -- including Malaysia and neighbouring Singapore.

Many had trekked for hours to reach the popular pilgrimage site before the final arduous climb up 272 steps to reach the temples set in caves.

A huge variety of offerings, known as "kavadi", were on show -- from simple pots of milk balanced on pilgrims' heads, to poles slung across shoulders, and large portable altars decorated with feathers and flowers.

With a metal skewer piercing his tongue and a heavy wooden pole hoisted on his back, Kumaraguru Kunalan said he wanted to give thanks to the god Murugan.

"For me, it's about asking for good health, my children's education," the 38-year-old father-of-four told AFP.

Prior to Thaipusam, devotees will typically hold daily prayer sessions, abstain from sex, refrain from cutting their hair and stick to a strict vegetarian diet for weeks.

Despite the extreme shows of devotion, the Thaipusam festival is very much a family affair, with elders joining their grandchildren as they make the annual pilgrimage.

There are no rules on what kind of kavadis devotees are required to carry on their pilgrimage, and the choice is a personal preference, Kumaraguru said.

Most of Malaysia's roughly 32 million people are Muslim Malays, but the country is also home to more than two million Indians, most of whom are descendants of labourers brought from southern India during British colonial rule.