WASHINGTON, Nov. 1 (Xinhua) - The suspect charged with killing 11 people at a synagogue in the US city of Pittsburgh pleaded not guilty on Thursday, according to records of court proceedings.

The suspect, Robert Bowers, has requested a jury trial to determine whether he is guilty of the 44-count indictment pressed against him by prosecutors Wednesday. The charges included "use and discharge of a firearm to commit murder during and in relation to a crime of violence," among others. 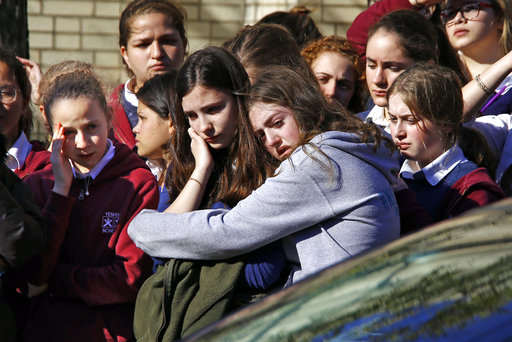 Students from the Yeshiva School in the Squirrel Hill neighborhood of Pittsburgh stand outside Beth Shalom Synagogue after attending the funeral service for Joyce Fienberg, Wednesday, Oct. 31, 2018. (Photo: AP)

The US Department of Justice said Bowers faces a maximum possible penalty of death, or life without parole, followed by a consecutive sentence of 535 years' imprisonment.

According to Bowers' indictment, the 46-year-old truck driver drove to the Tree of Life Synagogue in Pittsburgh Saturday morning and opened fire on the congregation. Bowers surrendered himself to police after the attack and was taken into custody.