WORLD Pizzas (and haircuts) back on the menu, but with warnings

Pizzas (and haircuts) back on the menu, but with warnings

Venice geared up to receive tourists, Milan's pizzerias prepared to open and Australians headed out to eat for the first time in weeks Saturday, but the reopening of restaurants, pubs and cafes came with a warning: Don't overdo it. 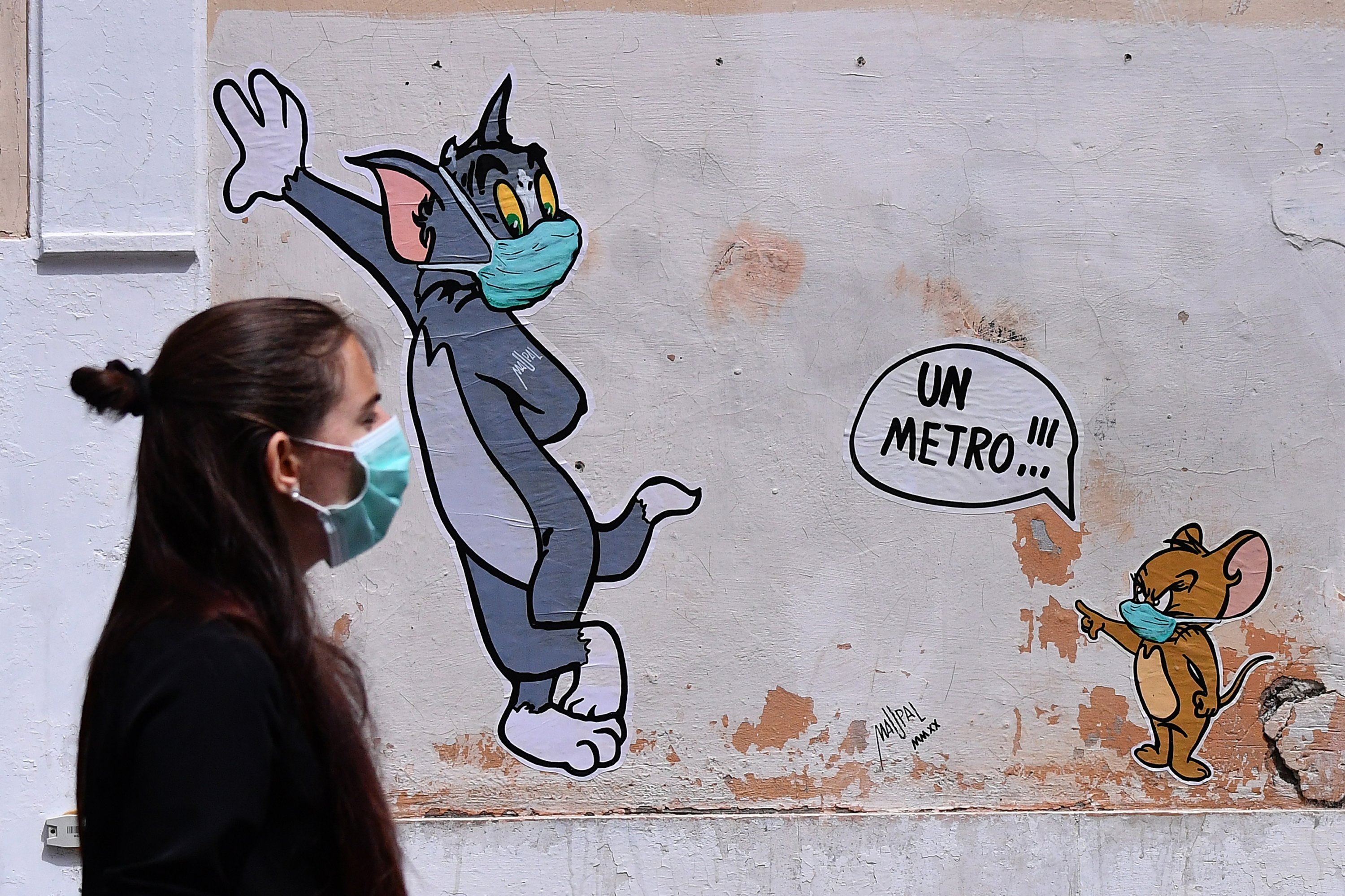 A woman wearing a face mask passes by a mural featuring William Hanna and Joseph Barbera' s characters Tom & Jerry mentioning the safe distance to be held from each other - "One meter" - in Rome, Friday, May 15, 2020. (Photo: AP)

Public health experts are urging caution as governments ease restrictions on eateries, shops and parks in many countries and roll out measures to restart dormant factories. The coronavirus pandemic, which has killed more than 300,000 people, has slowed in many places but could pick up again if precautions aren't taken or officials move too quickly to get people back to work.

"The message is, yes, appreciate all the efforts, appreciate the opportunity to release some of those measures, but let's not have a party, let's not go to town," said Tony Bartone, president of the Australian Medical Association.

Most restaurants are limited to 10 customers at a time, and Bartone said people must maintain social distance, follow coughing etiquette, wash their hands regularly and stay away from others if they are ill.

In New Zealand, even Prime Minister Jacinda Ardern and her fiance, Clarke Gayford, were initially turned away for Saturday brunch by a restaurant in the capital city, Wellington, because it was too full under coronavirus guidelines.

There was a happy ending, as a spot freed up and staff chased down the street to call the couple back.

Italy's tourism industry is focused firmly on June 3, when both regional and international borders reopen, allowing the first prospect of tourists since Europe's first lockdown went into place in early March. In tourist-reliant Venice, occupancy of the city's 50,000 hotel beds has hovered around zero ever since.

"Venice lives on tourism, period,'' said Claudio Scarpa, head of the city's hotel association. ''All the economic structures that operate in the city, including the port, are tied to tourism."

While Venice hopes for some kind of restart, it may have to wait a while yet. Germany — its border about a four-hour drive from Venice — is instructing citizens not to travel abroad for tourism until at least June 15, even as professional soccer in the country is resuming Saturday after a two-month break, with matches taking place behind closed doors.

France was also being cautious, calling for a coordinated European effort on opening. At the same time, it could make decisions "that protect the French" regarding countries "where the virus is still active," Interior Minister Christophe Castaner said Saturday.

"After a long period at home, we will all want to go out and have a good coffee in a bar, eat a pizza in a pizzeria, buy a pair of jeans, or go to the hairdressers," Milan Mayor Giuseppe Sala said in a Facebook video Saturday.

Many restaurant owners, however, complained that the new rules for reopening were unclear and that the entire sector — including suppliers and food producers — was suffering. Dozens protested Saturday outside Milan's main train station in front of signs reading: "I won't open today to close tomorrow," and calling for an abolition of taxes and more concrete help.

In Britain, officials and tourism boards were discouraging people from visiting popular tourist spots — like beaches or country parks — on the first weekend since lockdown rules were eased in England. Rules remain stricter in other parts of the U.K. and English daytrippers have been warned against crossing into Scotland or Wales.

In Spain, Prime Minister Pedro Sánchez said he would ask Parliament for what he hopes will be the last extension of the country's state of emergency to battle the coronavirus pandemic, until around late June.

Spain is slowly scaling back confinement measures, but the tourism industry, which accounts for 12% of GDP, looks set to lose its critical summer season.

In the United States, an Associated Press analysis found that 41 of the nation's 50 states fall short of the COVID-19 testing levels that experts say are necessary to avoid another wave of outbreaks, even as some of those states move aggressively to allow businesses to reopen.

Rapid, widespread testing is considered essential to tracking and containing the coronavirus. The AP analysis is based on metrics developed by Harvard University's Global Health Institute.

Harvard researchers have calculated that the U.S. needs to test at least 900,000 people daily to reopen the economy safely, nearly three times the current tally of about 360,000, according to figures compiled by the COVID Tracking Project website.

Among the states falling short are Texas and Georgia, which have reopened shopping malls, barbershops and other businesses, although New York state is moving more cautiously.

"I really do feel there are dangers here to opening up without enough tests, but I don't feel it's a uniform danger everywhere in the country," said.Dr. Ashish Jha, director of Harvard's Global Health Institute.

In South Korea, which has one of the highest levels of testing, a Health Ministry spokesman said Saturday that the country may have dodged a major outbreak after finding 162 cases linked to clubgoers in Seoul, the densely populated capital.

Son Young-rae said 46,000 people have been tested in the club-related outbreak.

India overtook China in the number of confirmed infections as Prime Minister Narendra Modi's government is due to announce this weekend a decision whether to extend the 54-day-old lockdown. India counted 85,940 infections and 2,752 deaths compared to China's 82,941 confirmed case and 4,633 fatalities.

China is shortening its annual legislative session, which begins late next week in Beijing, as small clusters of cases pop up elsewhere in the country. The spread of the disease has largely stopped in the country where the pandemic started, but Jilin province in the northeast has reported 28 cases over nine days, the latest two on Friday.

Britain's health department said that disease control experts are looking into whether dogs, which have been trained to sniff out certain cancers and malaria, can be potentially be used as a "non-invasive, early warning measure" to identify the coronavirus.

Six dogs, including labradors and cocker spaniels, have started basic training for the trial.