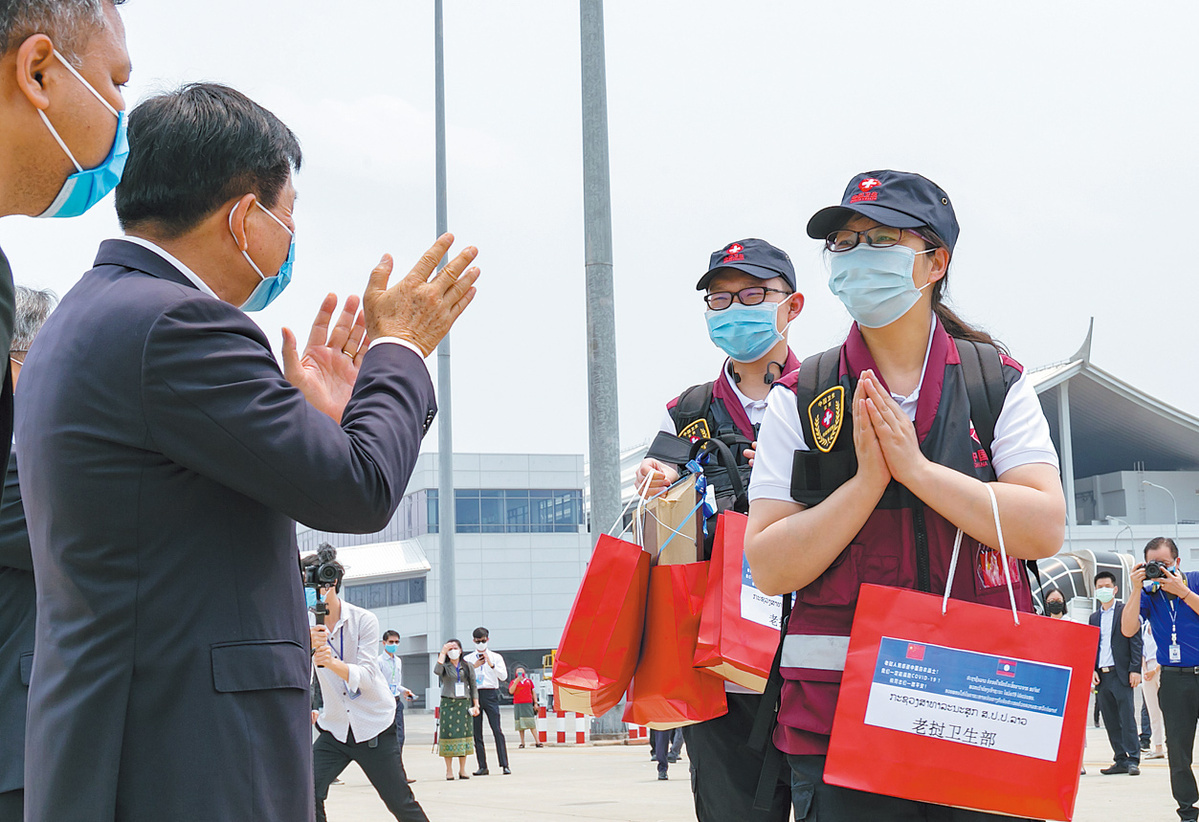 VIENTIANE - The Lao Ministry of Defence has awarded Lao People's Army friendship crosses to members of the Chinese army medical expert team which has been assisting Laos in battling the COVID-19 pandemic in the past two months.

Ti Xinyu, leader of the People's Libration Army (PLA) medical expert team, said at the cross-conferring ceremony on Wednesday that in the past two months, his team has fully shared China's anti-epidemic experiences with the Lao side, carried out cooperation with the Lao army over virus testing and confirmation, environmental disinfection and infection control, epidemiological investigation and personnel protection, and diagnosis and treatment training.

The joint efforts have comprehensively improved the epidemic prevention and control capabilities of the Lao army, and contributed to consolidating and developing the friendly relations between the two armies and to building a community with a shared future between the two countries, said Ti.

Chinese Ambassador to Laos Jiang Zaidong congratulated the expert team on its excellence in the assistance mission.

The ambassador said the expert team has properly adapted the Chinese anti-epidemic experience to the actual situation in Laos, participating in Laos' anti-pandemic battle from the phase with climbing infections to the phase of COVID-19 free.

The expert team has worked in harsh conditions such as in the heat of over 40 Celsius degrees, demonstrating the PLA's endurance and high morale amid hardships, he said.

Lao Deputy Defense Minister Aesamay Leuangvanxay said his country has received strong support from China in the fight against COVID-19, adding that the Chinese army not only sent an expert team in a timely manner, but also provided Laos with urgently-needed medical supplies.

According to a press release from the Chinese embassy in Laos on Thursday, the Lao officer said at the ceremony that the Chinese experts have overcome many difficulties and fully demonstrated the PLA's deep friendship with the Lao army.

The Lao Ministry of National Defense highly appreciated and sincerely thanked the Chinese national defense ministry for its strong support and believed that this was a vivid practice of jointly building a community with a shared future between Laos and China, said Aesamay.

At the invitation of the Lao People's Army, a group of five PLA anti-epidemic medical experts arrived in Vientiane on April 24.