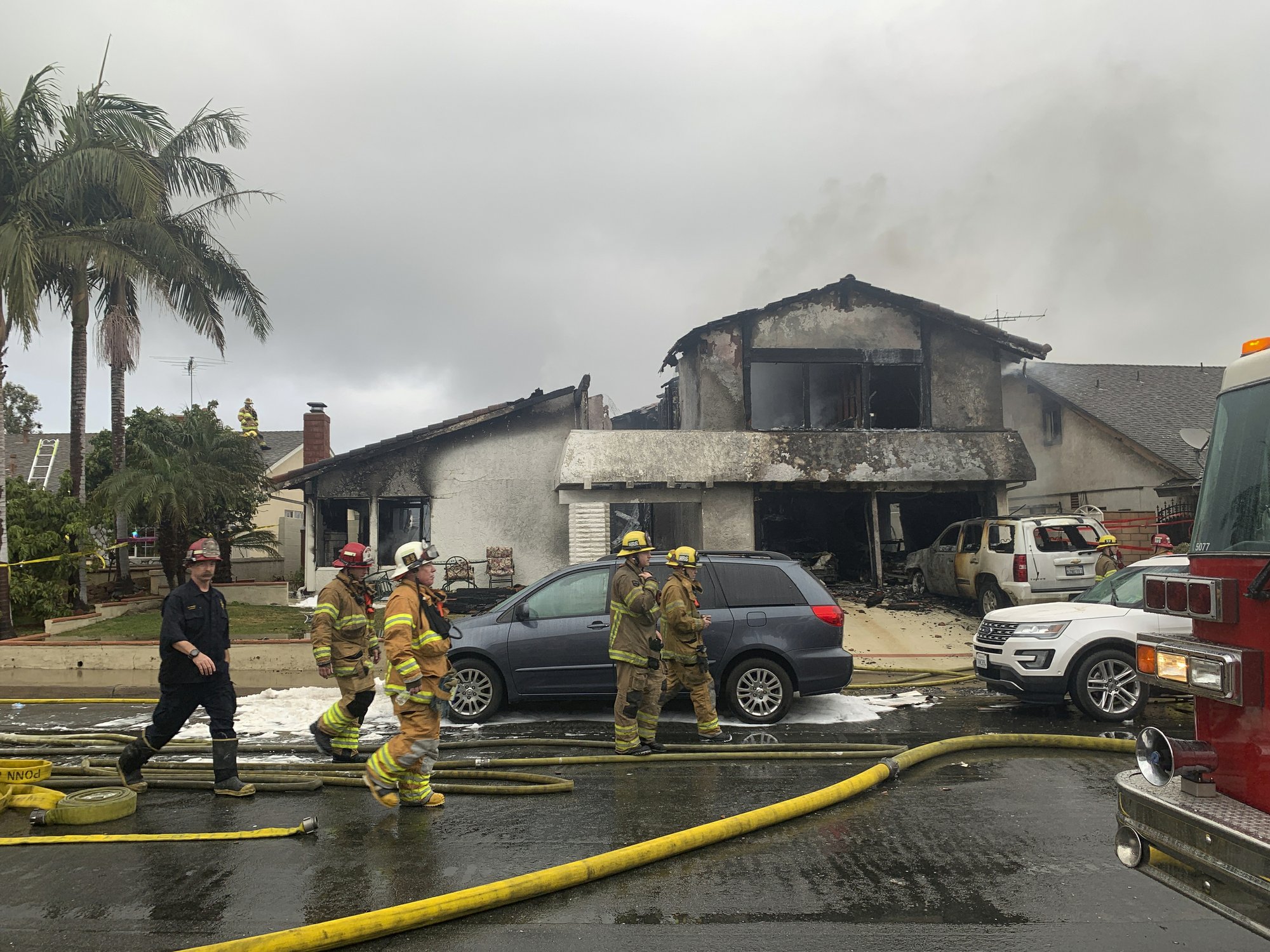 Firefighters respond to the scene of a plane crash at a home in Yorba Linda, Calif., Sunday, Feb. 3, 2019. (Photo:AP)

Dave Elfver was getting ready to go to a friend’s house to watch the Super Bowl when he heard a whining sound in his Southern California neighborhood “like a motorcycle going a hundred miles per hour.”

Then, he said, came the explosion from a twin-engine plane that broke apart in flight and crashed, setting a home on fire in the Los Angeles suburb of Yorba Linda, killing five people and injuring two.

“The whole house shook. I thought it was an earthquake, but   the whining sound didn’t make any sense.”

Elfver, 75, said he ran to his backyard and saw a house engulfed in flames. He ran toward it along with a crowd of neighbors, and only then he saw an airplane wing in the street.

“I didn’t realize what it was until I ran around the corner,” he said Monday.

Across the street, one of the columns of a neighbor’s home was collapsed and debris from the plane was strewn throughout the street. Another home had broken windows.

The four people on the ground who died were all in the house that burned. The pilot was also killed and was the only person on the plane, Orange County Sheriff’s Lt. Cory Martino told reporters.

Martino said the dead occupants of the home were two males and two females but he did not further identify them.

The Cessna 414A, which can carry up to eight people, took off from the Fullerton Municipal Airport about 12 miles (19 kilometers) west of the blaze, Federal Aviation Administration spokesman Allen Kenitzer said.

According to preliminary radar data, the plane reached an altitude of about 7,800 feet (2,377 meters) and then made a rapid descent, said Eliott Simpson, an aviation accident investigator with the National Transportation Safety Board.

The debris field spanned about four blocks, he said.

The main cabin of the airplane and one engine came to rest at the bottom of a ravine in the backyard of a house and the other engine landed on a street, creating a hole, Simpson said.

“During the impact sequence one house caught fire and that’s where we have the four fatalities,” he said.

It was not immediately clear what set the two-story house ablaze. The property where the fuselage ended up is about three houses down from the home that burned.

Aerial footage from news helicopters showed plane parts, including side panels and a propeller, scattered on rooftops and driveways near the burned house.

Shawn Winch, 49, said he was out in his backyard when he heard a loud sound.

“It sounded like a missile coming at my house,” he said.

He said he saw the plane veer off and debris falling.

“It wasn’t intact,” he said of the plane as it was coming toward the neighborhood. “It was already breaking up.”

The crash sent panicked neighbors into the streets.

Some tried to run into the flaming house but explosion sounds came from its garage and other neighbors called them off, Winch said.

“It was a boom. It sounded like something exploded. It shook our house,” said John Wolbart, who lives a block away.

He said he ran to the burning house and saw a woman come out with singed hair.

The injured were taken to a hospital with burns, said Pokey Sanchez, an assistant chief with the Orange County Fire Authority. A firefighter was also treated for a minor injury.

Clint Langford, who lives about a half-mile (0.8 kilometer) away, said he was in his living room when he heard a low rumbling.

“It’s the eerie, low rumbling sound that keeps getting lower and louder. It was scary,” he said. “And then all of a sudden boom. It shook the house.”

He looked out his front door and could see plane parts falling out the sky in the distance.

Pat Rogers, who lives about a mile (1.6 kilometers) from the crash site, told the Orange County Register he saw the plane on fire and coming apart.

Video posted on Twitter showed panicked residents running to the house as it became engulfed in flames and dark smoke. One man used a garden house to douse a burning wing that landed on the street.

Catherine Paulson, 78, said she considered herself lucky because she was not home when the debris crashed down and a piece of the plane landed in a tree right above her roof.

The National Transportation and Safety Board will investigate the cause of the crash.

Simpson said it will take some time to determine the maintenance history of the aircraft, which was built in 1981.

Representatives of the manufacturers of the airframe and engines were expected on the scene Monday.

The wreckage will be transported to Phoenix, Arizona, for a forensic examination, Simpson said.