Missouri's only abortion clinic could be closed by the end of the week because the state is threatening to not renew its license, Planned Parenthood officials said Tuesday. 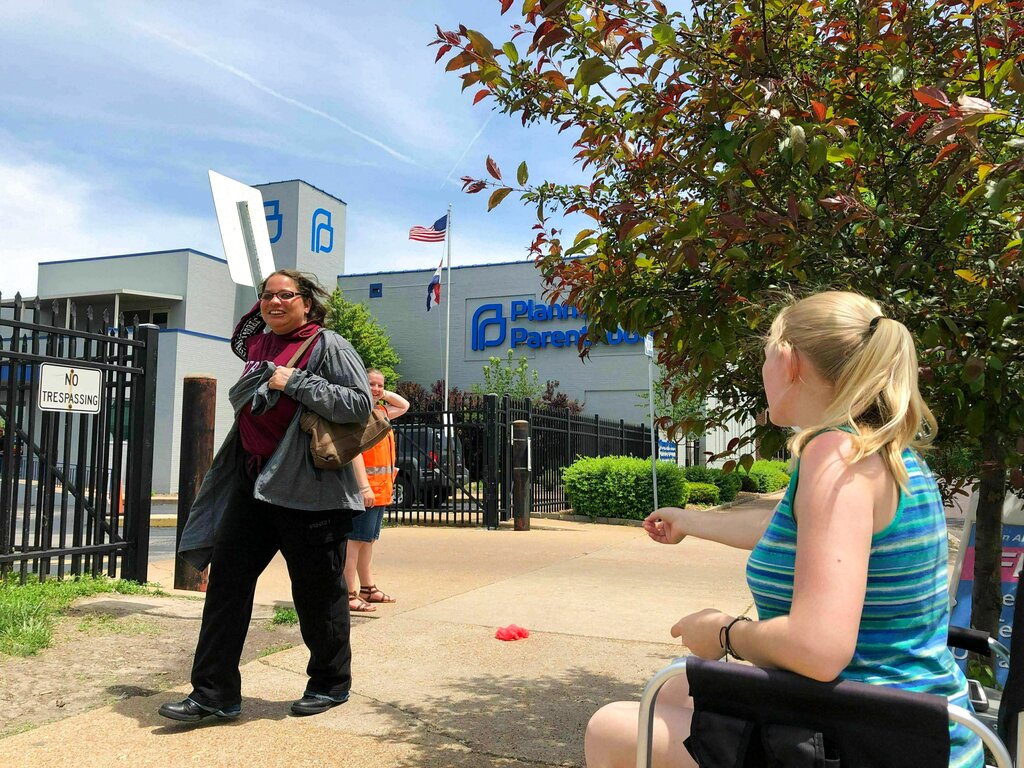 In this May 17, 2019 file photo, Teresa Pettis, right, greets a passerby outside the Planned Parenthood clinic in St. Louis. (Photo: AP)

Planned Parenthood officials said in a teleconference that the current license for the St. Louis facility expires Friday. If it isn't renewed, the organization said Missouri would become the first state without a functioning abortion clinic since Roe v. Wade in 1973, when the US Supreme Court legalized abortion.

"This is not a drill," said Dr. Leana Wen, president and CEO of Planned Parenthood Federation of America. "This is not a warning. This is real and it's a public health crisis."

According to a lawsuit filed by Planned Parenthood on Tuesday to try to ensure continued abortion services in St. Louis, the state health department visited the clinic in April to investigate a patient complaint.

Planned Parenthood says the agency hasn't specified the complaint, but said its subsequent "investigation has identified a large number of potential deficient practices requiring explanation by the physicians directly involved in patient care, as well as the attending physicians."

The lawsuit says the state wanted to interview seven physicians, including medical fellows who no longer provide care at the clinic. It says two staff doctors agreed but the others did not, and Planned Parenthood can't compel them because they're not staff.

Any stalemate over interviews is significant because, according to the lawsuit, the health department won't decide on renewing Planned Parenthood's license until the investigation is complete.

Missouri is among half a dozen states that have passed sweeping anti-abortion measures. Parson, a Republican, signed a bill Friday banning abortions on or beyond the eighth week of pregnancy, with no exceptions for rape or incest.

Under the Missouri law that comes into force Aug. 28, doctors who violate the eight-week cutoff could face five to 15 years in prison. Women who terminate their pregnancies cannot be prosecuted.

If the St. Louis clinic no longer can provide abortions, the nearest clinics performing abortions are in a Kansas suburb of Kansas City and in Granite City, Illinois, just across the Mississippi River from St. Louis. The Kansas clinic is about 260 miles (420 kilometers) from St. Louis.

"While the state of Missouri is waging a war against its abortion services and providers, the Hope Clinic remains committed to the patients of Missouri," Erin King, executive director of the Granite City clinic, said in a statement.

Wen said Missouri has "illegally weaponized the licensing process." Colleen McNicholas, an OB-GYN at the Planned Parenthood office in St. Louis, called it the "natural consequence of several decades of restriction after restriction."

"This is precisely what we've been warning of," McNicholas said.

Alabama's governor signed a bill on May 15 making performing an abortion a felony in nearly all cases. Supporters have said they hope to provoke a legal challenge that will eventually force the Supreme Court to revisit Roe v. Wade.

Unlike Alabama's near-total abortion ban, lawmakers who helped draft the Missouri bill say it's meant to withstand court challenges instead of spark them. If the eight-week ban is struck down, the bill includes a ladder of less-restrictive time limits at 14, 18 or 20 weeks.

Missouri's bill also includes an outright ban on abortions except in cases of medical emergencies, but that would kick in only if Roe v. Wade is overturned. Missouri Right to Life called it "the strongest pro-life bill in Missouri history."

Kentucky , Mississippi , Ohio and Georgia also have approved bans on abortions once fetal cardiac activity can be detected, which can occur in about the sixth week of pregnancy. Some of those laws already have been challenged in court, and similar restrictions in North Dakota and Iowa have been struck down by judges.

Even before the latest legislation, Missouri already had some of the most restrictive abortion regulations in the nation, including a requirement that doctors performing abortions have partnerships with nearby hospitals.

A total of 2,910 abortions occurred in 2018 in Missouri, according to provisional data provided by the state health department. That includes 433 abortions at eight weeks of pregnancy and 267 at six weeks or earlier.

The rash of new legislation has left abortion providers in some states uncertain about what they can now do, and McNicholas said there is "a tremendous amount of confusion" among women who come to the Planned Parenthood clinic.

Meanwhile, the American Civil Liberties Union of Missouri is seeking a statewide vote on Missouri's new abortion law. The ACLU said Tuesday that it has submitted a referendum petition to the secretary of state's office as a first step toward blocking and potentially repealing the law. The group wants to force a referendum in 2020.