Plea to hold firm on controls 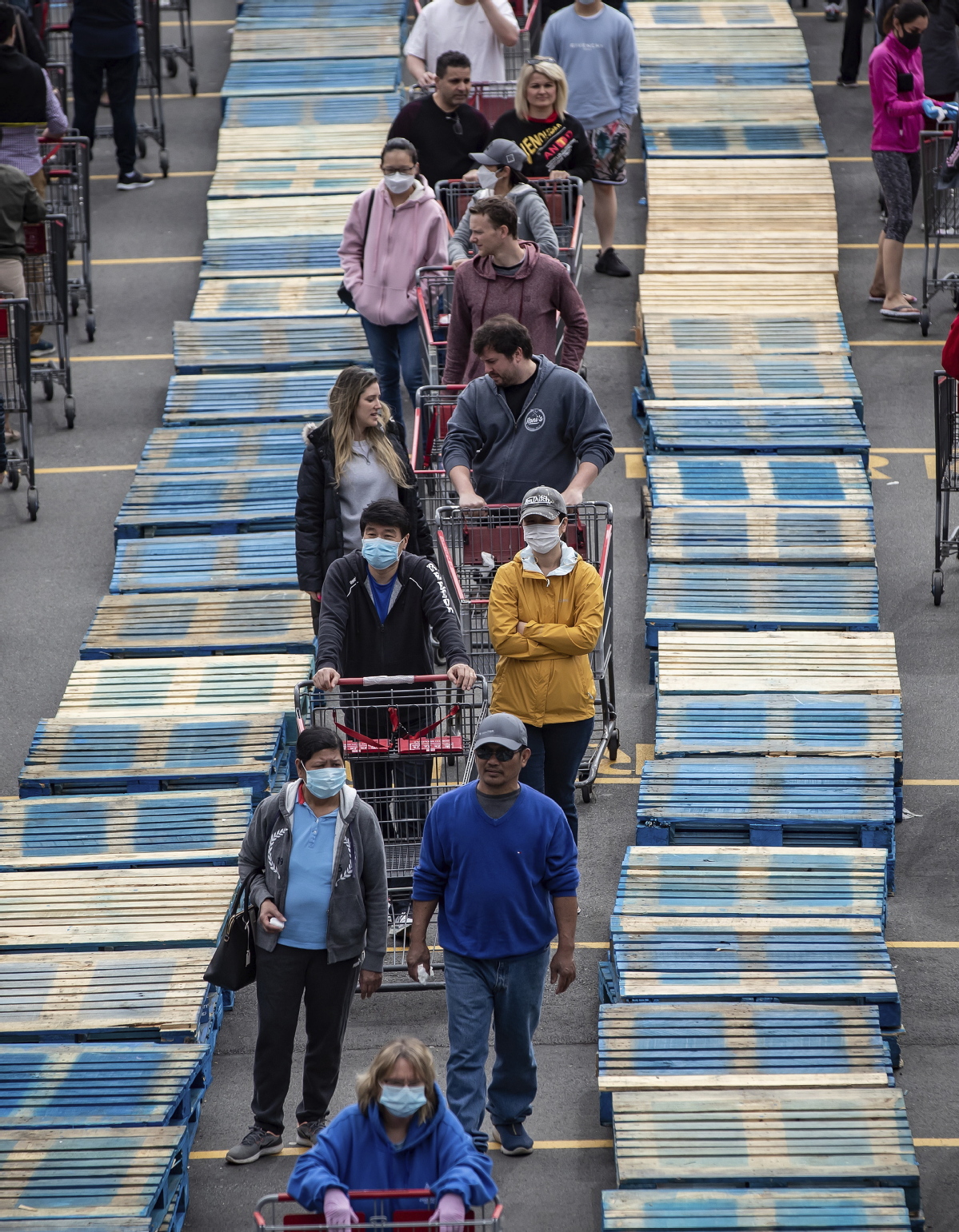 Shoppers are separated by rows of wood pallets to help with social distancing as they line up to enter a Costco store in Burnaby, British Columbia, Canada, on Sunday. DARRYL DYCK/THE CANADIAN PRESS/AP

Time is not right for countries to ease up, says expert in call for cooperation

With the coronavirus on the march around the world, now is not the time for the worst-hit countries to ease up on outbreak controls, says an epidemiologist in calling for strengthened cooperation against the pandemic.

Wafaa El-Sadr, a professor of epidemiology and medicine at Columbia University in the United States, said the global outbreak is affecting various parts of the world in different ways. While it is unclear how much longer it will run, it will last "probably in some manner or another until we discover an effective vaccine", she said.

"Countries around the world are in very different phases of the epidemic. There are certainly places like Europe and the US where the number of cases continues to rapidly increase, while it appears to have stabilized in other parts, including several Asian countries," Sadr said.

The US is the world's worst-affected country, having registered 759,786 cases and 40,683 deaths by Monday morning, according to a tally by Johns Hopkins University, which puts the number of infections worldwide above 2.4 million.

In recent days, an increasing number of people have taken to the streets in the US to demand that state governors reopen economies shut by measures to curb the spread of the novel coronavirus.

Rallies in the states of Arizona, Colorado, Montana and Washington took place on Sunday, following earlier protests in half a dozen states.

Despite the risk of a resurgence in COVID-19, agitation for an easing in social movement restrictions has grown.

Amid these pressures, Canadian Prime Minister Justin Trudeau said on Saturday that his country's border with the US will remain closed to nonessential travel for a further 30 days and likely longer.

Governors in several US states have begun discussions on how to manage a reopening of economies after encouraging signs of a slowdown in the rate of infection. But other regions of the country remain under strict lockdown.

New York Governor Andrew Cuomo announced last week that the state would extend its stay-at-home measures until May 15. At his daily virus briefing on Sunday, Cuomo urged caution among residents, while acknowledging the "cabin fever" felt by many and their desperation for the state to reopen.

As with the divergences seen among states and regions of the US, countries in Europe are considering differing paths on how and when to reopen their shuttered societies.

Germany, the Czech Republic, Norway and others are preparing to lift some restrictions on Monday, though France and Spain ruled out any relaxations for several weeks.

In Sadr's opinion, decisions by authorities on what to do about mitigation measures are dependent on "careful analyses of the status of the epidemic".

"Strong evidence that COVID-19 cases and deaths are decreasing in a sustained manner is necessary before making the decision to enable each mitigation measure," she said. "At the same time, countries need to be ready to maintain strong containment measures, like the tracing and tracking of cases and contacts."

She said scientists are also concerned about the possibility that the virus will come back in the winter of 2020 after a lull during the northern hemisphere summer.

"However, it is likely that there would be less transmission as a section of the population is likely to be immune. In addition, hopefully by then there will be treatments already identified," Sadr said.

She said it is critical that countries cooperate in the face of the pandemic. As the world is supremely connected, she said, control measures in one region depend on the effectiveness of actions elsewhere.

She said collaboration between countries is necessary to advance scientific knowledge and share the lessons learned from national responses to outbreaks, among other dimensions.

In particular, the epidemiologist stressed that countries should learn from China's anti-epidemic experience. She said China's ability to isolate the virus and share its gene structure with others around the world was helpful, as were the examples of the country's establishment of fever clinics and shelter hospitals.

"The epidemiological and clinical insights from the experience in China were helpful for others that faced the epidemic later," Sadr said.