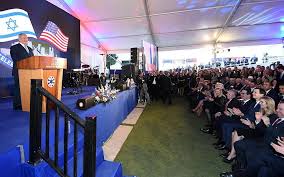 Erekat said in a statement that the tour which was participated by John Bolton, the U.S. national security advisor, and David Friedman, the U.S. ambassador to Israel, accompanied by Israeli officials, is a violation of international law and resolutions.

He added that the U.S. administration has pushed the Middle East quickly into "violence, chaos, extremism and bloodshed."

The PLO also slammed Bolton's statement that the Israel has right to defend itself, saying that "the occupation, field executions, killing of the innocent and house demolitions" is not self defense, but "war crimes."

Bolton, who arrived in Israel on Saturday, said that the Israeli-U.S. relation is at its best under the administrations of Israeli Prime Minister Benjamin Netanyahu and U.S. President Donald Trump, voicing his country's support for Israel.

Before meeting Netanyahu, Bolton visited the Western Wall in the Old City in East Jerusalem and toured the tunnels there.

Under international law, the Old City of Jerusalem is considered as occupied territory.

The Palestinians want East Jerusalem as the capital of their future independent state, while Israel wants all Jerusalem to be its eternal capital.

Israel annexed East Jerusalem in the 1967 war and declared the whole city as its eternal indivisible capital in 1980, a move that has not been recognized by the international community.

In December 2017, Trump recognized Jerusalem as the capital of Israel and decided to move the U.S. embassy in Israel from Tel Aviv to the city.

The Palestinians described the move as a provocation and a flagrant violation of international law. They disqualified the United States from being the sole sponsor of the peace process with Israel and called for an international multilateral peace mechanism to overlook peace negotiations.

The Palestinians have boycotted the U.S. administration since it recognized Jerusalem as Israel's capital and moved its embassy in Israel to Jerusalem in May 2018.

They said in several statements that Trump's "deal of the century" falls way short of their expectations and aspirations for lasting and just peace settlement.