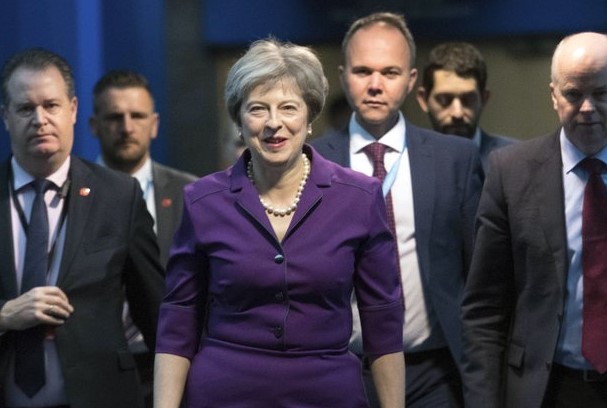 LONDON, Oct. 15 (Xinhua) -- British Prime Minister Theresa May said on Monday that "real progress" has been made on the "vast majority" of issues between her country and the European Union (EU).

May said she still believes a Brexit deal is "achievable" as she briefed the House of Commons on the latest development of the Brexit talks.

"There has inevitably been a great deal of inaccurate speculation," said May, adding "The shape of a deal across the vast majority of the withdrawal agreement - the terms of our exit - are now clear."

"We also have broad agreement on the structure and scope of the framework for our future relationship, with progress on issues like security, transport and services," she further said.

Talks reportedly faltered over the need for a back-up plan, known as the backstop, to avoid a hard border.

"While we are both committed to ensuring that this future relationship is in place by the end of the implementation period, we accept that there is a chance that there may be a gap between the two," said May regarding the UK-EU Brexit talks regarding Northern Ireland.

EU had proposed a backstop that would see Northern Ireland carved off in the EU's customs union and parts of the single market, separated through a border in the Irish Sea from the Britain's own internal market.

"As I have said many times, I could never accept that, no matter how unlikely such a scenario may be," May stressed.

The prime minister insisted any backstop arrangement must apply to the country as a whole so not to create a border in the Irish Sea.

"Creating any form of customs border between Northern Ireland and the rest of the UK would mean a fundamental change in the day-to-day experience for businesses in Northern Ireland, with the potential to affect jobs and investment," she said.

May stressed that Brexit backstop must be temporary to ensure that Britain cannot be kept in this arrangement "indefinitely."

"The EU requires a backstop to the backstop," she said.

The prime minister's speech came two days ahead of a key summit of European leaders on Wednesday.

The latest development of the Brexit talks triggered wide concerns of a no-deal Brexit.

A no-deal Brexit which might result in no Brexit at all, is closer than ever, the European editor of London's Daily Telegraph said Monday.

The possible scenario has also prompted disassociation in Northern Ireland which voted "remain" in the Brexit Referendum in 2016.

Mary Lou McDonald the leader in Ireland of Sinn Fein has called on May for a referendum on the future of Northern Ireland if there is no deal on Brexit. She said a hard border would be erected the instant Britain crashes out of the EU under World Trade Organization rules.

McDonald said the damage of a hard border would be so great to peace and prosperity on the island of Ireland, adding the Irish "would not just sit back and allow that to happen".

McDonald told the Guardian newspaper: "If, by accident or design, there is a crash or a no-deal Brexit, Mrs May and whoever is in No. 10 needs to understand that in those circumstances the constitutional question would have to be put to the people of Ireland. There would have to be a border poll, yes."

"You could not countenance such damage and disruption to our island and imagine that we will simply be philosophical about it and move on," she told the Guardian in an interview.