THE HAGUE, March 17 (Xinhua) --The rightist liberal People's Party for Freedom and Democracy (VVD) of Prime Minister Mark Rutte led in the 2021 parliamentary elections in the Netherlands, according to the final exit poll released on Wednesday. 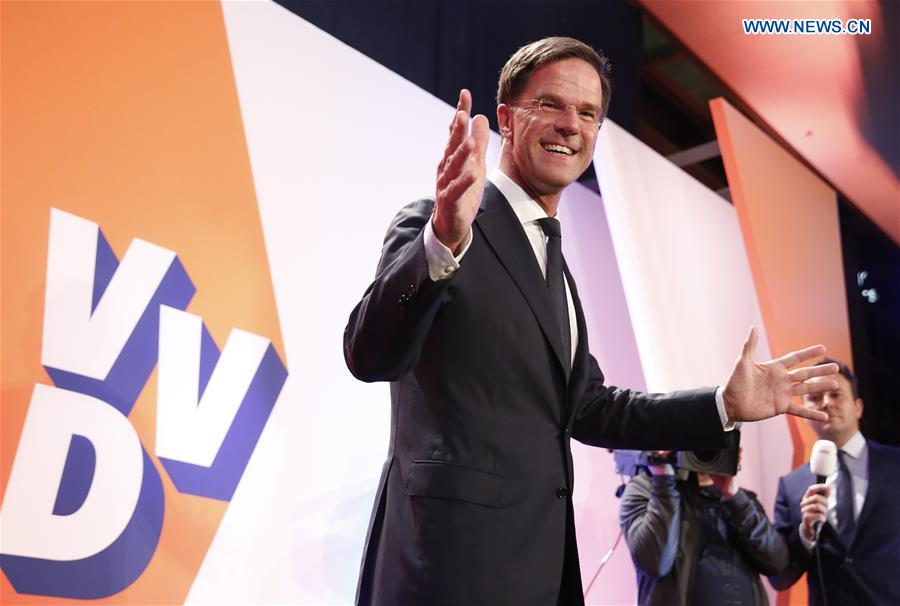 Dutch Prime Minister and People's Party for Freedom and Democracy VVD leader Mark Rutte gestures during election night for his liberal rightist party VVD in The Hague, the Netherlands, on March 15, 2017. The liberal rightist party VVD of Prime Minister Mark Rutte took the lead in the Dutch parliamentary elections, according to the final exit poll released on Wednesday, with the far-right party PVV staying far behind. (Xinhua/Ye Pingfan)

The VVD got 36 of the 150 seats in the House of Representatives, or the lower house of the parliament. It is on its way to becoming the biggest party in the parliament, just like four years ago in 2017 when the VVD finished with 33 seats.

The center-leftist party Democrats 66 (D66) came second with 27 seats, showed the exit poll released by polling agency Ipsos. This would mean eight seats more than four years ago and the best result in the history of the party.

The right-wing populist Party for Freedom (PVV) was projected to get 17 seats, a loss of three seats compared to 2017, and the center-rightist Christian Democrats CDA, 14 seats, down by five.

According to the exit poll, the three left-wing parties PvdA (Labor), SP (Socialist Party) and GroenLinks (GreenLeft) were forecast to get nine, eight and eight seats respectively. The far-right anti-lockdown party Forum voor Democratie (Forum for Democracy) would win eight seats -- six more than in 2017.

In 2017, Rutte's VVD won the elections by a landslide and formed a government coalition with CDA, D66 and the Christian Union (CU). This government stepped down on Jan. 15 this year as a result of the so-called child benefits scandal, in which parents were wrongly accused of fraud.

The final exit poll showed that the same coalition government would be possible again, even without the CU.

A total of 37 parties and over 1,500 candidates joined the race for the 150 seats in the House of Representatives. Due to the coronavirus pandemic, the elections were spread over three days.

With a population of a little over 17 million people, the country has an electorate of around 13.2 million. Turnout is expected to be 82.6 percent, according to Ipsos, compared to 81.9 percent in 2017.