In recent days, a large number of refugees who have traveled from Iraq and Afghanistan have gathered at Belarus' border with Poland, trying to enter the European Union via Poland to seek asylum. Poland has deployed troops to stem the influx of refugees, leaving more than 10,000 people stranded at the border and raising the prospect of an armed conflict between the two countries. 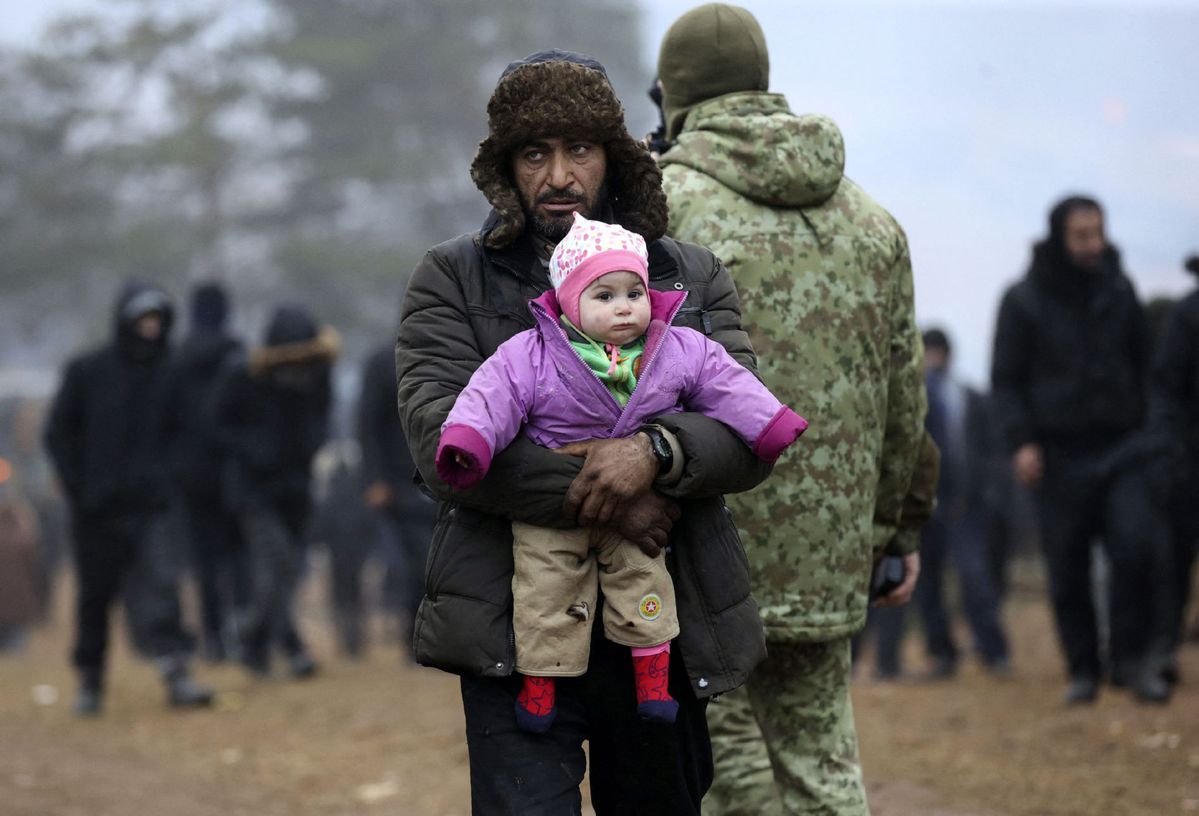 A migrant carrying a child walks in a camp near the Belarusian-Polish border in the Grodno region on Nov 14, 2021. [Photo/Agencies]

After flights from Iraq to Belarus spiked in early August and were halted, asylum-seekers chose to fly to Minsk from Istanbul (four times a day) or Dubai (twice a day).

As Poland shares a border with Germany, the destination country most of the refugees aimed for, Poland is bearing the brunt. Poland reported more than 14,000 illegal border crossings in October, and it said that this month, more than 10,000 people have been waiting each day to cross the border. The bodies of four refugees reportedly were found on Belarus' border with Poland, and as winter sets in and tensions escalate, refugees face an increasing risk of freezing to death or being accidentally injured.

The violent and sudden influx of refugees has raised doubts in Poland about Belarus' position. The European Union had previously imposed a series of restrictive measures on Belarus after rejecting the result of its 2020 presidential election. In June this year, the sanctions were increased again, causing the Belarusian government's anger. Polish Prime Minister Mateusz Morawiecki accused Belarus of waging "a new type of war" using civilians as "ammunition" in an attempt to create a refugee crisis to put pressure on the EU. Belarus denied the accusation, saying it is humanitarian to allow the transit of refugees.

To stem the flow of refugees, Poland has built a barbed wire fence along the border and plans to spend $400 million to build a wall on its border with Belarus. As the tension escalated, Poland's Defense Ministry deployed 12,000 troops to the region.

German Interior Minister Horst Seehofer said Poland's protection of frontiers was justifiable. In addition, the EU has repeatedly offered to provide aid to Poland, including sending more soldiers to the border, but Poland has not accepted aid from the EU yet.

On Nov 10, Charles Michel, president of the European Council, met with Prime Minister Morawiecki, and both sides reached an agreement on solidarity in dealing with the refugee crisis. It is highly possible that Poland will receive aid from the EU in the future.

Though the tension is taking place on Poland's border with Belarus, the situation reflects the crisis that the EU is facing.

On the one hand, the Schengen Area system, under which a group of European countries have agreed to abolish passport and customs controls among one another, remains flawed. In 2015, Turkey reportedly put pressure on the EU by relaxing its refugee control, leading to a major crisis in which more than 1 million refugees flooded into Europe. The EU finally agreed to provide Turkey with 6 billion euros ($6.79 billion) in aid to help it tighten border controls.

According to the Schengen agreement, refugees could move freely within the EU, no matter from which border countries they enter the bloc. At present, the external borders of the Schengen area remain the internal affairs of member states, and the EU does not have the authority or resources to manage them uniformly.

Six years on, the shortcomings of the Schengen mechanism still exist, and if problems such as how to control refugee flow and pacify border countries are not properly addressed, any large-scale influx of refugees may lead to a new crisis within the EU.

On the other hand, the reason the refugee crisis on the Poland-Belarus border continues to ferment this time is also related to the conflict between Poland and the EU, which have been at odds over constitutional issues since 2015. The refugee crisis comes at a time when the EU has suspended the COVID-19 pandemic recovery fund to Poland while considering a previous Polish court ruling that questioned the supremacy of EU law.

Poland has repeatedly said it does not need help from the EU, but the real reason is that it does not want to accept Brussels' negotiating terms for taking aid for the refugee crisis from the EU.

It is too early to say whether the conflict within the EU will delay the resolution of the refugee crisis. However, as far as the current situation is concerned, the conflict is further escalating and could even lead to a military confrontation between Poland and Belarus. It if goes that way, Poland may soon find it hard to go it alone.

European Council President Michel's visit to Poland on Nov 10 was a good sign, but the two sides' differences haven't been resolved yet. It remains to be seen whether the EU will be able to persuade Poland to accept the aid.

The author is a researcher at the Institute of European Studies at the Chinese Academy of Social Sciences.