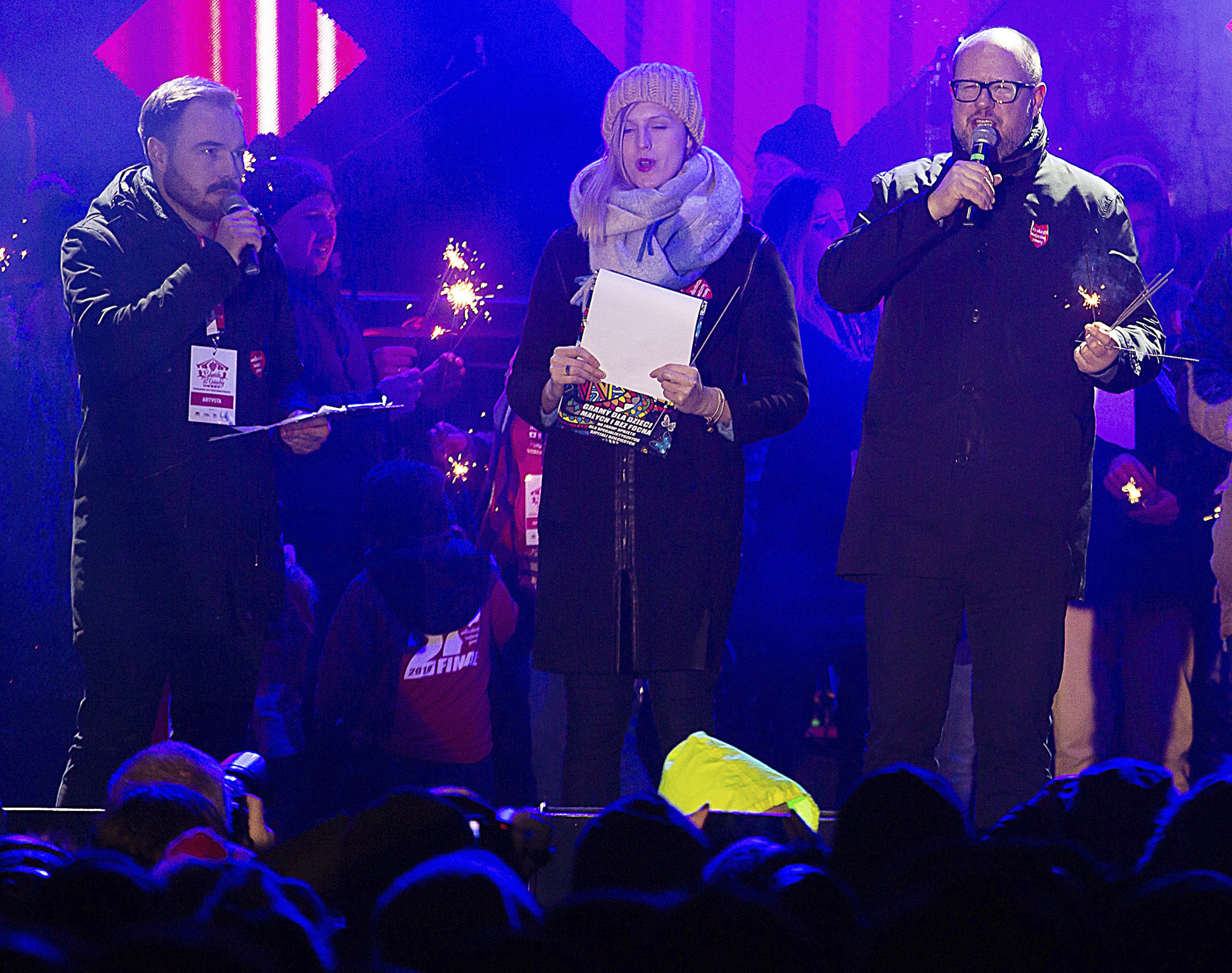 Gdansk Mayor Pawel Adamowicz,right, far right, speaks to an audience shortly before he was stabbed in Gdansk, Poland, on Sunday Jan. 13, 2019. (Photo: AP)

The mayor of a city in Poland was in very serious condition after he was stabbed on stage Sunday during the finale of a large charity event, and Polish media reported details that gave the attack a political element.

Gdansk Mayor Pawel Adamowicz was attacked with a knife, held his belly and collapsed during the "Lights to Heaven," fundraiser organized by the Great Orchestra of Christmas Charity, Poland's most important charity.

Polish President Andrzej Duda said he was informed that "doctors succeeded in reanimating the heart of the seriously injured Mayor Pawel Adamowicz and there is hope, but his condition is very difficult." He called on for people to pray for the mayor.

Polish broadcaster TVN reported that the suspected assailant, who police said was a 27-year-old from Gdansk, shouted from the stage that he was imprisoned under a previous national government led by Civic Platform, a party to which the mayor formerly belonged, despite being innocent. He was arrested.

Several Polish media outlets, including Rzeczpospolita, reported that the man yelled after stabbing Adamowicz: "Hello! Hello! My name is Stefan, I was jailed but innocent. ... Civic Platform tortured me, that's why Adamowicz just died."

Radio Gdansk reported that Adamowicz was stabbed in the area of his heart, but did not cite its source, while Rzeczpospolita described his condition as "critical," citing unnamed sources. A spokesman for the hospital called his condition "very serious."

European Council President Donald Tusk, a former Polish prime minister who co-founded Civil Platform and is from Gdansk, wrote on Twitter: "Let's all pray for Mayor Adamowicz. Pawel, we are with you."

The head of the charity, Jerzy Owsiak, is a liberal critic of Poland's current right-wing government. He blamed what he described as an atmosphere of hate under the ruling Law and Justice party for the attack on the mayor.

Owsiak said he personally was depicted with a defamatory animated image that had anti-Semitic overtones and ran on state TV last week.

The animation showed Owsiak as a clay figure being manipulated by a leading Civic Platform official who grabbed piles of cash. A Star of David was on one of the banknotes. The broadcaster apologized after the animation triggered an outcry. 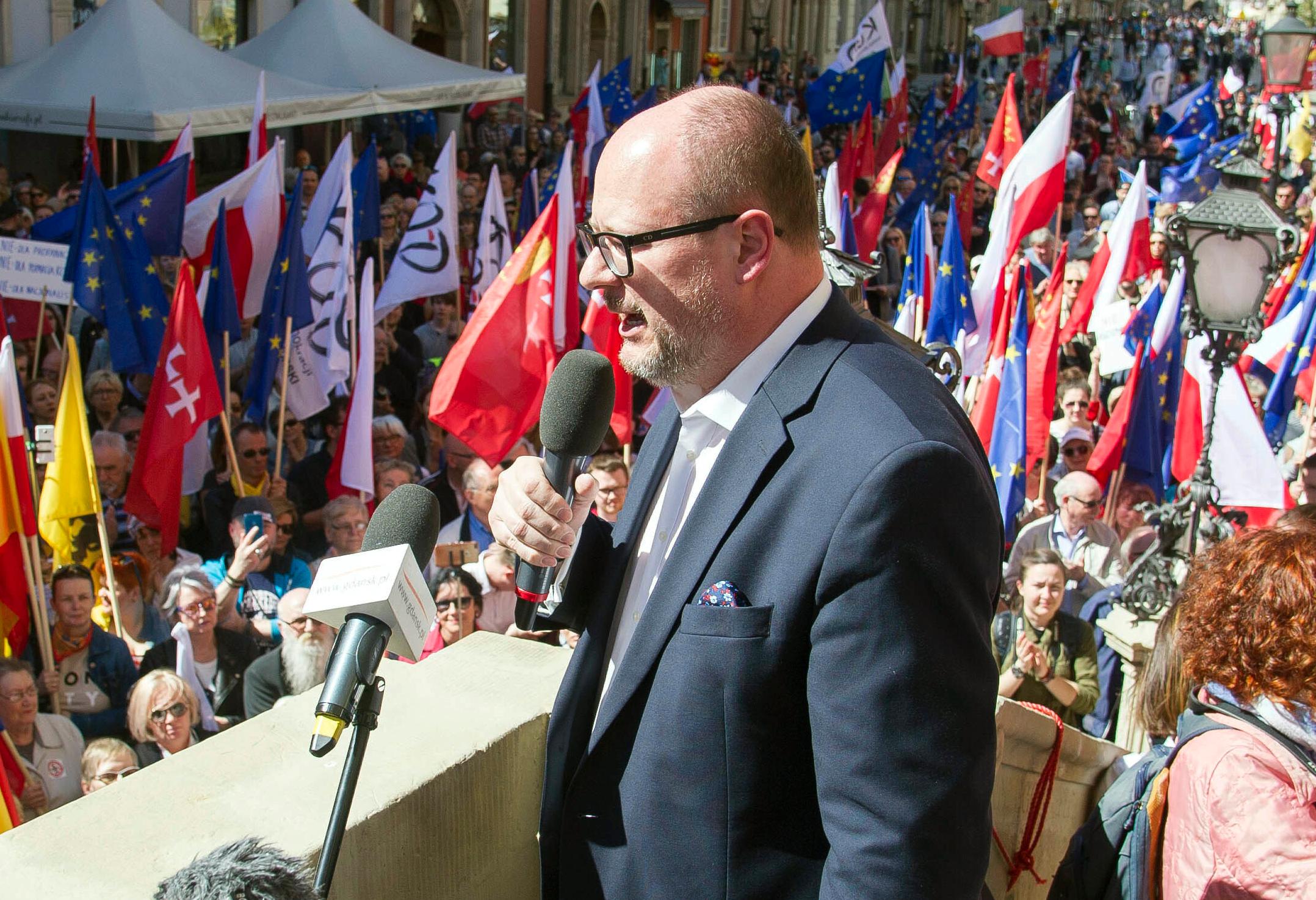 In this Saturday, April 21, 2018 file photo, the mayor of Gdansk, Pawel Adamowicz addresses a rally organized in protest against a recent gathering by far-right groups in this Baltic coast city, in Gdansk, Poland. (File photo: AP)

Adamowicz has been mayor of Gdansk, a Baltic port city, since 1998. He was part of the democratic opposition born in that city under the leadership of Lech Walesa during the 1980s. After leaving Civic Platform, he was re-elected to a sixth term as an independent candidate in the fall.

As mayor, he has been a progressive voice, supporting LGBT rights and tolerance for minorities. He marched in last year's gay pride parade, a rare action for a mayor in Poland.

He also showed solidarity with the Jewish community when the city's synagogue had its windows broken last year, strongly denouncing the vandalism.

Other leaders expressed support for Adamowicz on Sunday.

President Duda said that while he and the mayor have had political differences, "today I am unconditionally with him and his loved ones, just as — I hope — all of us compatriots are. I pray for his return to health and full strength."