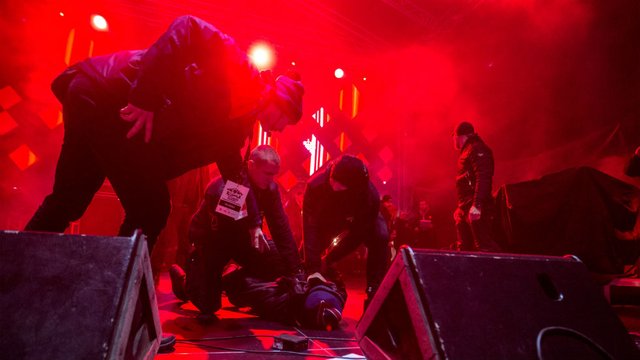 Polish security rush to the stage to help Mayor Pavel Adamwicz after an assailant stabbed him Sunday evening during a charity event. (Photo: Agencies)

The 53-year-old mayor was stabbed during a charity event in front of thousands Sunday afternoon, the victim of an assassination attempt.

Sunday marked Poland's annual charity day as concerts were held in major cities across the country.

Adamowicz was killed on stage during the outdoor fundraising event "Light to Heaven.”

According to online videos, the assailant rushed to the stage while Adamowicz was speaking before a crowd, stabbing him in the chest and abdomen.

The mayor was rushed to a local hospital where he was pronounced dead roughly twelve hours after the attack.

A native of Gdansk, Adamowicz entered local politics in 1990 as a local councilor before serving as Gdansk's mayor in 1998, a position he held for more than 20 years.

Adamowicz was considered a powerful liberal politician. Well-known internationally as a supporter of LGBT, immigrant and refugee rights amid rising nationalist sentiment.

“I am a European, so my nature is to be open. Gdansk is a port and must always be a refuge from the sea.” Adamowicz said in 2016.

Gdansk, long considered the base for Polish liberalism, will endure a period of tremendous sadness. Monday morning local residents and supporters gathered in front of the hospital hoping for good news.

The head of Great Orchestra of the Christmas Charity,

Jerzy Owsiak, conductor for the Great Orchestra of the Christmas Charity, and a critic of Poland’s right-wing government blamed the mayor’s death on what he described as an “atmosphere of hate” under the ruling Law and Justice Party (PiS).

Politicians across the country condemned the stabbing, including members of the ruling Law and Justice Party, such as Prime Minister Mateusz Morawiecki and Interior Minister Joachim Brudzinski.  Adamowicz was an outspoken opponent of PiS.

Poland is one of the safest countries in Europe. Crime rates, especially with violent crime, are some of the lowest in Europe.

Poland is also one of the most conservative countries in Europe.

Religion and nationalism have had an influence on Polish society. In recent years, the Polish economy has developed rapidly, and the gap between rich and poor has widened. Some political figures have been accused of deliberately manipulating hot-button issues that have stoked populist thought within Polish society. As a result, violent crime against immigrants and minorities has risen.

Silent demonstrations in a show of solidarity were staged across the country Monday evening.

Polish President Andrzej Duda will meet with political leaders to organize a march against violence and hatred in the wake of Sunday’s attack.