Police: 1 dead after shots fired into car at Detroit protest 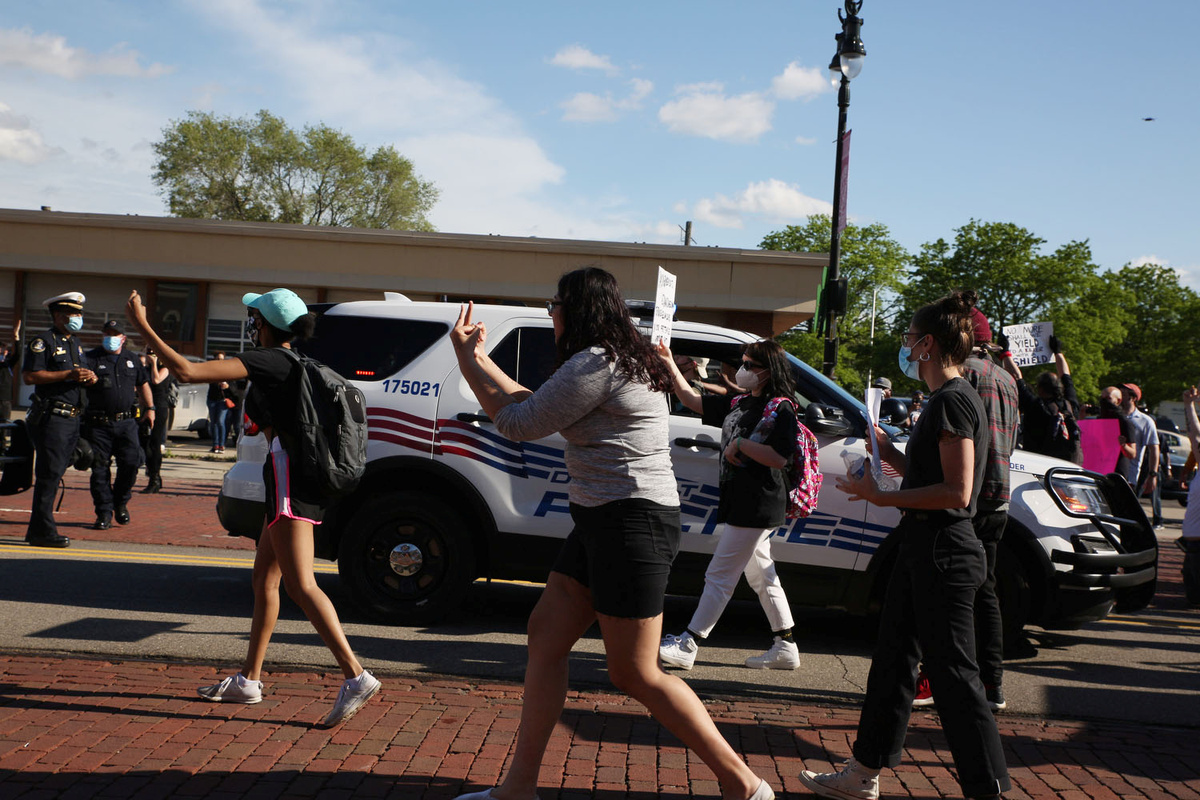 Protestors give the finger to police during a protest against the death in Minneapolis police custody of African-American man George Floyd and the assault of Sha'Teina and Dan Grady El by Washtenaw County police, in Detroit, Michigan, US on May 29, 2020. (Photo: Agencies)

One person was killed in downtown Detroit after someone fired shots into a vehicle during a protest over the death of George Floyd, a handcuffed black man who died in Minneapolis police custody, a Detroit police spokeswoman said Saturday.

The shooting occurred about 11:30 pm Friday near Detroit's Greektown entertainment district as officers were confronted with dozens of protesters, said Sgt. Nicole Kirkwood, a police spokeswoman. She said an officer wasn't involved in the shooting.

A police report released Saturday said the shooting victim, a 21-year-old man, was sitting in the driver's seat of a silver Dodge Caliber in a parking lot with two other male occupants when an unknown person fired shots into the vehicle and then fled on foot.

Police earlier said that based on preliminary information, the shooting suspect had pulled up in a Dodge Durango and fired shots into a crowd.

Kirkwood said the victim was pronounced dead at a hospital and that police were still investigating the circumstances surrounding the shooting.

Police made more than 60 arrests during Friday's protest. The majority of those arrested live in Detroit's suburbs and not the city itself, Kirkwood said.

“We know that the individuals from outside the city of Detroit who converged at the protest location don’t represent this city,” Police Chief James Craig told reporters Friday evening.

The demonstration began earlier in the day and was peaceful as protesters marched by Detroit Police Headquarters. As evening wore on, some in the crowd became belligerent and a police commander was struck with a rock Friday evening and hospitalized.

Officers, many in riot gear, confronted the demonstrators and formed lines across streets during the demonstration, but by midnight, the crowd had thinned considerably as police shot canisters of gas toward the protesters.

The violence in Detroit and many other cities was sparked by anger over over Floyd’s death in Minneapolis on Monday, which was captured on cellphone video. It led to the firing Tuesday of the four police officers who were arresting Floyd on for suspicion of passing a counterfeit bill and to third-degree murder and manslaughter charges being filed Friday against the officer who used his knee to pin Floyd down by his neck for more than eight minutes, even as Floyd pleaded for air and went limp.

Wayne County Prosecutor Kym Worthy said Saturday in a statement that “an overwhelming number of people were engaged in peaceful protest" during Friday's protests over Floyd's death — a death which she said “has profoundly affected our nation."

Worthy said that while peaceful protests over Floyd's death are “absolutely warranted," acts of violence are not. And she urged protesters to engage in “safe, peaceful and civil protest of his murder."

“The point of protesting what happened to Mr. Floyd can be lost when violence becomes the narrative of the protest," she said.