Police faced gunfire as they responded to reports of a possible gunman at a Tennessee high school Monday, leaving one person dead and an officer wounded, authorities said. 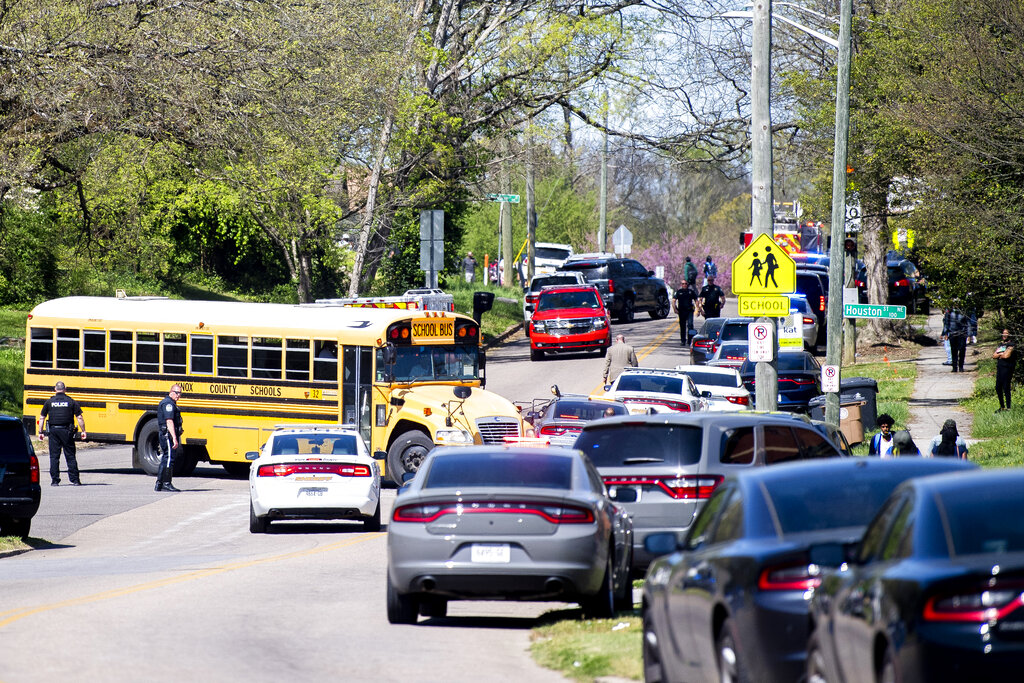 Police work in the area of Austin-East Magnet High School after a reported shooting Monday, April 12, 2021. Authorities say multiple people including a police officer have been shot at the school. (Photo: AP)

No one else was killed or wounded at Austin-East Magnet High School in Knoxville, a city about 180 miles (290 kilometers) east of Nashville, police said. A male has been detained. Police said they responded to the school around 3:15 p.m. and when they encountered a male with a gun, shots were fired.

“Upon approach of the subject, shots were fired,” Knoxville Police Department posted on Facebook. “A Knoxville Police officer was struck at least one time and transported to the hospital with injuries that are not expected to be life-threatening."

Speaking from outside a hospital, Knoxville Mayor Indya Kincannon told WATE-TV that she spoke with the wounded officer and that he was conscious and in good spirits.

The police post said a male died at the school, which is not far from the city’s zoo and Interstate 40. A map of the neighborhood shows the school is in a residential area near some churches.

Three students from Austin-East Magnet High School have been shot to death away from the campus less than three weeks apart this year, police said. Administrators have said students felt the arts magnet school was a safe space, according to a story in the Knoxville News Sentinel.

State Rep. Sam McKenzie, who represents the district and went to the school, said in a statement, “I am at a loss to describe my sadness as yet another horrific act of gun violence has happened in my community," urging the community to “reclaim the sanctity of our beloved neighborhood."

“This is the fourth unnecessary shooting involving the Austin East community this year and we must make sure we take every step and make every effort to prevent these tragedies from continuing to occur,” McKenzie aid.

The Tennessee Bureau of Investigation said it was sending agents to the school.

Gov. Bill Lee mentioned the shooting at a news conference but said he had little information.

“I just wanted to make reference to that and ask, for those who are watching, online or otherwise, to pray for that situation and for the families and the victims that might be affected by that in our state," he said.

Last week, the Republican governor signed legislation that will make Tennessee the latest state to allow most adults 21 and older to carry handguns — openly or concealed — without first clearing a background check and training. Lee backed the legislation over objections from law enforcement groups, who argued that the state’s existing permit system provided an important safeguard for knowing who should or shouldn’t be carrying a gun.

The law, which does not apply to long guns, will take effect July 1. The new measure also increases certain penalties. For example, theft of a firearm — now a misdemeanor that carries a 30-day sentence — will become a felony with a mandatory six month incarceration. It also makes exceptions for people with certain mental illnesses and criminal convictions.

When asked earlier this year whether recent mass shootings in Georgia, Colorado and others gave him any concern about timing, Lee has previously said the increased penalties mean that “we in fact will be strengthening laws that would help prevent gun crimes in the future.”