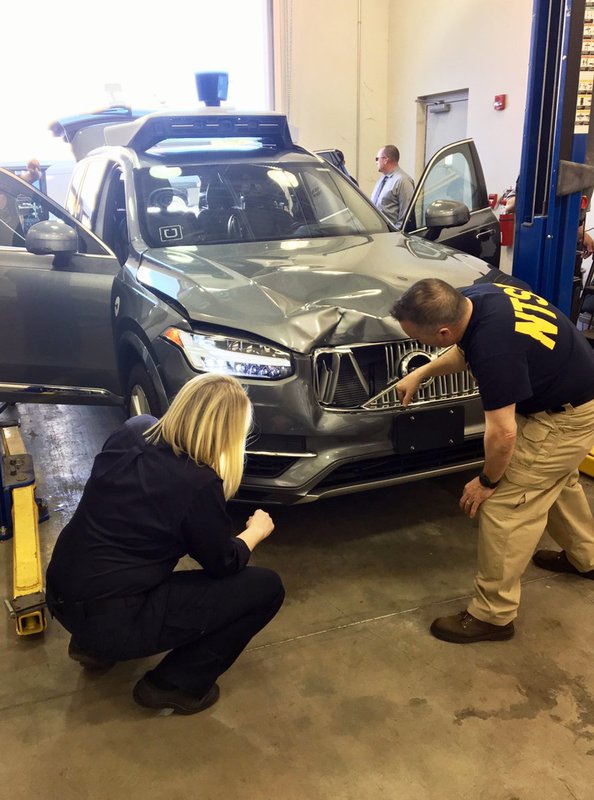 The human backup driver in an autonomous Uber SUV was streaming the television show “The Voice” on her phone and looking downward just before fatally striking a pedestrian in suburban Phoenix, according to a police report.

The 300-page report released Thursday night by police in Tempe revealed that driver Rafaela Vasquez had been streaming the musical talent show via Hulu in the 43 minutes before the March 18 crash that killed Elaine Herzberg as she crossed a darkened road outside the lines of a crosswalk. The report said the crash, which marks the first fatality involving a self-driving vehicle, wouldn’t have happened had the driver not been distracted.

Dash camera video shows Vasquez was looking down near her right knee for four or five seconds before the crash. She looked up a half second before striking Herzberg as the Volvo was traveling about 44 miles per hour. Vasquez told police Herzberg “came out of nowhere” and that she didn’t see her prior to the collision. But officers calculated that had Vasquez been paying attention, she could have reacted 143 feet before impact and brought the SUV to a stop about 42.6 feet before hitting Herzberg.

“This crash would not have occurred if Vasquez would have been monitoring the vehicle and roadway conditions and was not distracted,” the report stated.

Tempe police are looking at a vehicular manslaughter charge in the crash, according to a March 19 affidavit filed to get a search warrant for audio, video and data stored in the Uber SUV.

The detective seeking the warrant, identified as J. Barutha, wrote that based on information from the vehicular homicide unit, “it is believed that the crime of vehicular manslaughter has occurred and that evidence of this offense is currently located in a 2017 Grey Volvo XC-90.”

A previously released video of the crash showed Vasquez looking down just before the crash. She had a startled look on her face about the time of the impact.

The National Transportation Safety Board, in a preliminary report issued last month, said the autonomous driving system on Uber’s Volvo XC-90 SUV spotted Herzberg about six seconds before hitting her, but did not stop because the system used to automatically apply brakes in potentially dangerous situations had been disabled.

The system is disabled while Uber’s cars are under computer control, “to reduce the potential for erratic vehicle behavior,” the NTSB report said. Instead of the system, Uber relies on the human backup driver to intervene, the report stated. But the system is not designed to alert the driver.

Uber pulled its self-driving cars out of Arizona the day before the NTSB report was released, eliminating the jobs of about 300 people who served as backup drivers and performed other jobs connected to the vehicles. The company had suspended testing of its self-driving vehicles in Arizona, Pittsburgh, San Francisco and Toronto while regulators investigated the cause of the crash. Arizona Gov. Doug Ducey prohibited Uber from continuing its tests of self-driving cars after Herzberg was run over.

Police initially determined that Vasquez was not impaired after giving her a field test.

Analysis of video taken from the vehicle shows Vasquez looked downward 204 times in the 11.8 miles traveled before the crash. While the SUV was in motion, Vasquez averted her eyes away from the roadway nearly a third of the time, according to the report.

“Sometimes, her face appears to react and show a smirk or laugh at various points during the times that she is looking down,” the report said. “Her hands are not visible in the frame of the video during these times.”

Attempts by The Associated Press to contact Vasquez through email and phone numbers on Friday weren’t successful.

Cristina Perez Hesano, a lawyer for Herzberg’s daughter and husband, and Pat McGroder, an attorney representing Herzberg’s mother, father and son, declined to comment on the police report.

An Uber spokeswoman said in a prepared statement Friday morning that the company is cooperating with investigations while it does an internal safety review. “We have a strict policy prohibiting mobile device usage for anyone operating our self-driving vehicles. We plan to share more on the changes we’ll make to our program soon,” the statement said.

Use of a mobile device while an autonomous vehicle is moving is a fireable offense, and “this is emphasized on an ongoing basis,” the statement said.

After the crash, the ride-hailing company said it did a top-to-bottom safety evaluation, reviewing internal processes and safety culture. Uber also said it brought in former transportation safety board chairman Christopher Hart to advise the company on safety.

“This should not have happened in so many ways and on so many levels,” Smith said. “This report, if true, makes things worse. And obviously it would not look good to a jury.”

Uber settled quickly with some of Herzberg’s family members but others have retained legal counsel.

The case was handed to Polk’s office after the prosecutor’s office in metro Phoenix passed on the case, citing a potential conflict of interest. The agency in Phoenix had previously participated in a public-safety campaign with Uber.

On a body camera video the night of the crash, police gathered at the scene quickly realized that they were dealing with a big story because an autonomous vehicle was involved.

An officer who identifies himself as supervisor of the unit that investigates fatal crashes is seen asking a man who appears to be an Uber supervisor about getting video from the SUV and whether Uber’s lawyers have been contacted.

“You guys know as well as I know that this is going to be an international story,” the police supervisor says. “We want to make sure that we’re doing not only what we normally do and not doing anything different, but also making sure that everything’s above board and everything’s out in the open.”

The supervisor goes on to say that he’s going to communicate as honestly as he can. “I hope that you guys do the same because we’re going to be working together throughout this whole process from now, probably for months from now.”