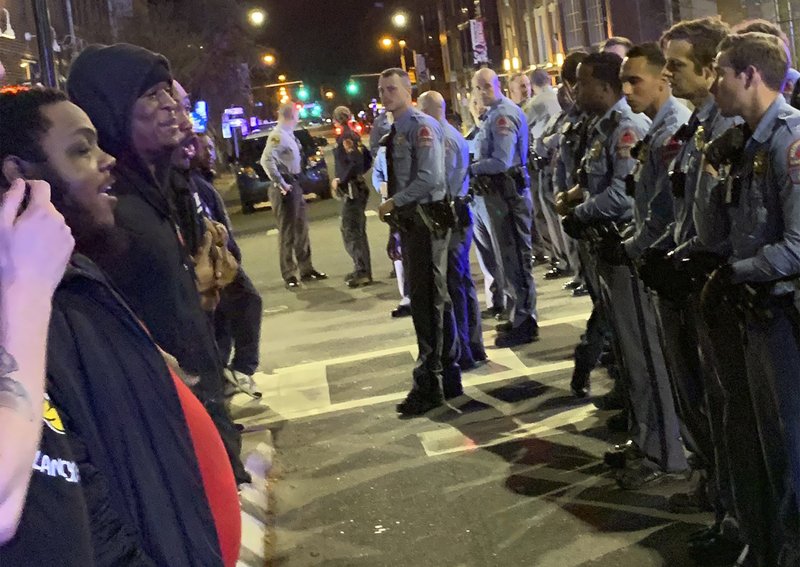 Earlier this year, demonstrators came face to face with police at an intersection during a protest March 11, 2020, in Raleigh, North Carolina.  (Photo: AP)

North Carolina’s capital city is cleaning up after a night of protests in response to the death of George Floyd led to what the city’s police chief described as “anarchy.”

News outlets report police fired rubber bullets, tear gas and pepper spray at protesters and journalists after an initially peaceful protest that drew more than 1,000 people broke down as Saturday evening wore on.

“We had about two hours of peaceful protesting,” Raleigh Police Chief Cassandra Deck-Brown said at a Sunday morning press conference. “Everything after that was anarchy.”

Raleigh Mayor Mary-Ann Baldwin called the aftermath of the protests “heartbreaking and devastating.”

“There was a group of people who came in the dark of the night who had no intention of protesting peacefully,” she said.

Republican House Speaker Tim Moore posted video of the chaotic scene on his Facebook page from a downtown high-rise and criticized the governor for failing to call in the National Guard.

Cooper, a Democrat, said on Twitter that he is working with emergency management officials and found it “frustrating that planned peaceful protests about real systemic racism are marred.”

Five officers were treated and released from the hospital for injuries they sustained in the protests. One suffered a broken jaw, Deck-Brown said.

In Fayetteville, where protests also turned chaotic and some businesses were ransacked and fires were set, Mayor Mitch Colvin planned to call for a curfew Saturday night.

In Charlotte, where protests Friday night turned violent, another 30 people were arrested in a second night of protests on charges ranging from assaulting a government employee to gun possession, Charlotte-Mecklenburg Police said. The arrests came after some protesters fired shots and threw rocks and explosives at officers and at a fire truck responding to help someone who had fallen into a manhole. Police said two officers sustained minor injuries in the rioting.

The protests in North Carolina were similar to those carried out across the nation in response Floyd’s death. His arrest Monday was caught on camera and he could be heard saying “I can’t breathe” while a white officer, Derek Chauvin, pressed his knee on Floyd’s neck for several minutes. Chauvin was charged Friday with third-degree murder and second-degree manslaughter.