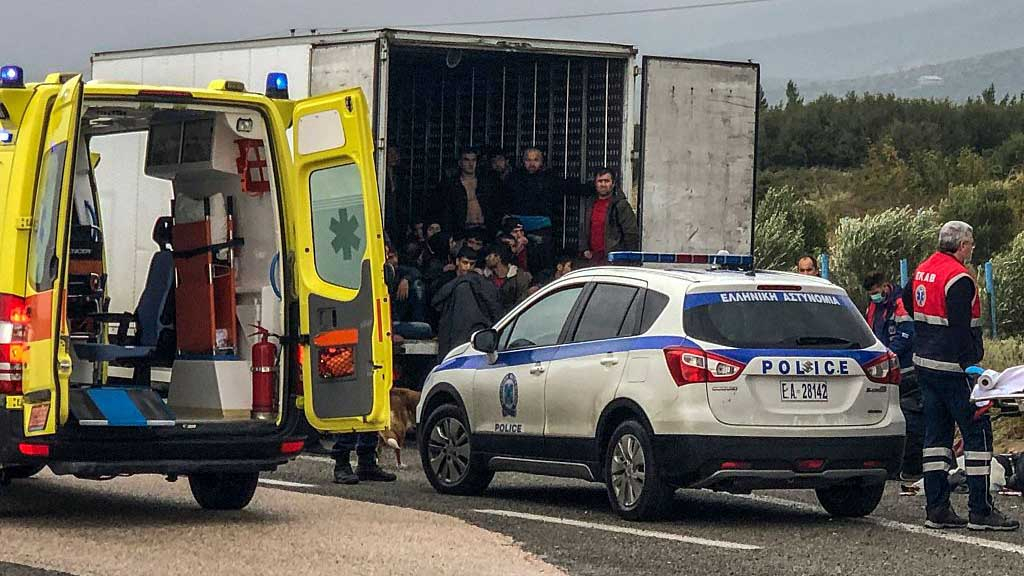 Forty-one migrants, mostly Afghans, were found on Monday hiding in a refrigerated truck that was stopped by police on a highway in northeastern Greece after it was believed to have crossed into the country from neighboring Turkey.
At least a third were found to have trouble breathing, and eight were treated in a hospital for respiratory problems. Authorities say the refrigeration on the truck hadn't been switched on. All but two – an Iranian and a Syrian – were from Afghanistan, while six were minors.
Police at the toll station stopped the truck near the city of Xanthi for a routine check, arresting the driver and taking him and the migrants to a nearby police station for identification. The 40-year-old Georgian driver of the truck, which had Bulgarian registration plates, is now under arrest.
"A police operation is under way but we believe the lorry entered the country from Turkey," said Lt Col Theodoros Chronopolous, a police spokesman. "Discoveries of this sort are rare but happening more frequently mainly because migrants want to avoid the islands."
The discovery came 10 days after 39 bodies, all believed to be Vietnamese migrants, were discovered in the back of a refrigerated truck near London. Two people have been charged in Britain and eight in Vietnam over the deaths.

Greece is currently struggling with the biggest resurgence in arrivals of migrants and refugees since 2015, when more than a million crossed into Europe from Turkey via Greece. Most of them are reaching Greek Aegean islands close to the Turkish coast via boats but a large number also come overland, using a river border crossing with Turkey.
Road accidents, mainly in northern Greece, involving migrants trying to cross into other countries have become more frequent in recent years. Police have arrested dozens of people believed to be involved in human trafficking so far in 2019.
The Europe's humanitarian watchdog reported that nearly 44,000 asylum seekers have crossed the Aegean Sea from Turkey to the Greek islands so far this year, compared to fewer than 32,500 in all of 2018 – an annual increase of more than 30 percent, but still far below 2015 and 2016 levels.
In response, the Greek government passed a new asylum law on Thursday, October 31, aimed at speeding up procedures and facilitating the return of more people to Turkey under the terms of the EU-Turkey deal signed in March 2016 to curb migration across the Aegean.
Greece's right-wing New Democracy government that came to power in July has vowed to move up to 20,000 off the islands and accelerate the deportation of 10,000 people whose asylum claims are rejected.
Arrivals of unaccompanied children have also increased. About 1,000 minors have arrived since July, the Greek labor ministry said, with the total number estimated at over 5,000. A fifth of them are now missing.
The ministry said while taking office that it would help the migrants to integrate more smoothly into Greek society, pledging to build more facilities and shelters for migrant children.