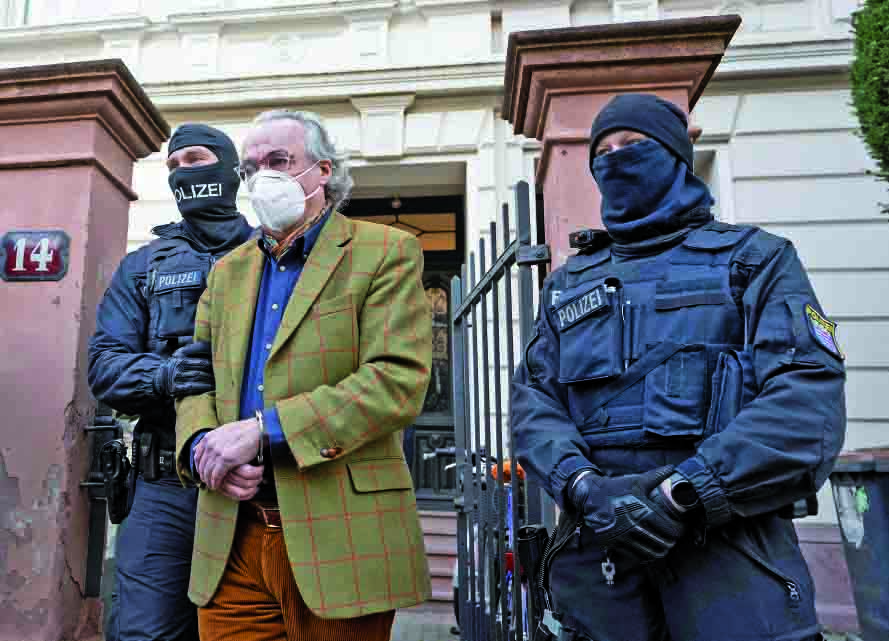 Members of Germany's special police forces detain a man identified as Heinrich XIII after searching a house in the city of Frankfurt on Wednesday during raids against an alleged far-right terror group. (Photo: AFP)

Police in Germany have arrested 25 suspected members of an alleged far-right "domestic terrorist organization" that aimed to overthrow the government by force.

Germany's federal prosecution agency said investigations were directed against far-right and exmilitary figures, who allegedly planned to storm the Reichstag, which is the Parliament building, and seize power.

German media outlets reported the raids took place across 11 German states, with 3,000 officers searching 130 sites, including a forest palace in the state of Thuringia.

One of those arrested was said to be a minor aristocrat described as Heinrich XIII P.R., 71, who is alleged to have been one of two ringleaders in the plot.

News agency reports said the network was tied to the so-called Reichsburger movement, which is a label for groups that reject the legitimacy of the modern German state.

A report from the BBC cited investigators as saying the group sought to implement a new state "modeled on the Germany of 1871, with an empire called the Second Reich".

In a social media post, Buschmann stated: "Since this morning a large anti-terror operation is taking place. The federal public prosecutor general is investigating a suspected terror network from the Reichsburger scene. The suspicion exists that an armed attack on constitutional organs was planned."

According to the federal prosecutor, the arrested suspects "belong to a terrorist organization founded by the end of November 2021 at the latest, which has set itself the goal of overcoming the existing state order in Germany and replacing it with its own form of state, which has already been worked out in outline".

The agency said that of the 25 men and women arrested, 24 were from Germany and one is from Russia, and noted that there are 27 other suspects.

Germany's Deutsche Welle news service, or DW, cited investigators as saying that the group's adherents believe Germany is ruled by a so-called "deep state", akin to unfounded claims about the United States that were made by former US president Donald Trump.

The federal prosecuting agency said the members of the group "followed a conglomerate of conspiracy myths consisting of narratives of the so-called Reichsburger as well as QAnon ideology".

"The investigations provide a glimpse into the abyss of a terrorist threat from the Reichsburger scene," she said. "We know how to defend ourselves with all our might against the enemies of democracy."

DW quoted Barbel Bas, the president of the Bundestag, which is Parliament's lower house, as saying the operation shows "that our democratic constitutional state is attentive and capable of action".