WORLD Police: Man kills 3, himself at daughter's birthday in NYC

Police: Man kills 3, himself at daughter's birthday in NYC

A man shot and killed three people Monday night at a New York City apartment where a birthday party was being held for his 9-year-old daughter, police said. 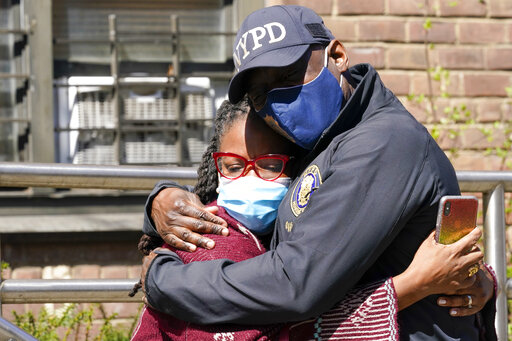 A police officer hugs a community leader outside the building where a man shot the mother of his child and two of her daughters dead before turning the gun on himself, Tuesday, April 6, 2021, in the Brownsville neighborhood of the Brooklyn borough of New York. (Photo: AP)

Joseph McCrimons killed the mother of his child and two of her daughters before killing himself, police said. His body was found in a walkway with two guns nearby.

The shooting happened around 11:15 p.m. in the Van Dyke Houses, a public housing complex in Brooklyn’s Brownsville neighborhood, police said.

NYPD Chief of Detectives James Essig said McCrimons, 46, had been in a relationship with his child's mother, Rasheeda Barzey, for 20 years.

McCrimons, who in other records is listed with the last name McCrimon, served more than eight years in state prison for a Long Island manslaughter conviction. He was released in 2003.

There was no history of domestic violence between McCrimons and Barzey and no prior 911 calls involving them, Essig said, but lately the relationship has been “very rocky.”

“We know he left in an agitated state to meet her,” Essig told reporters Tuesday.

McCrimons and Barzey's 9-year-old daughter called 911. According to Essig, she told the dispatcher: “Daddy’s coming from my birthday... he didn’t bring presents.”

Solei and Chloe Spears were Barzey’s daughters with a different father, they said.

Shea said seeing the young girl who called 911 “would tear your heart out."