Police files released Wednesday show contacts between Breonna Taylor and a man she dated previously who was suspected of drug dealing, but raise new questions about what led narcotics investigators to the raid of her home that resulted in her death in a burst of police gunfire. 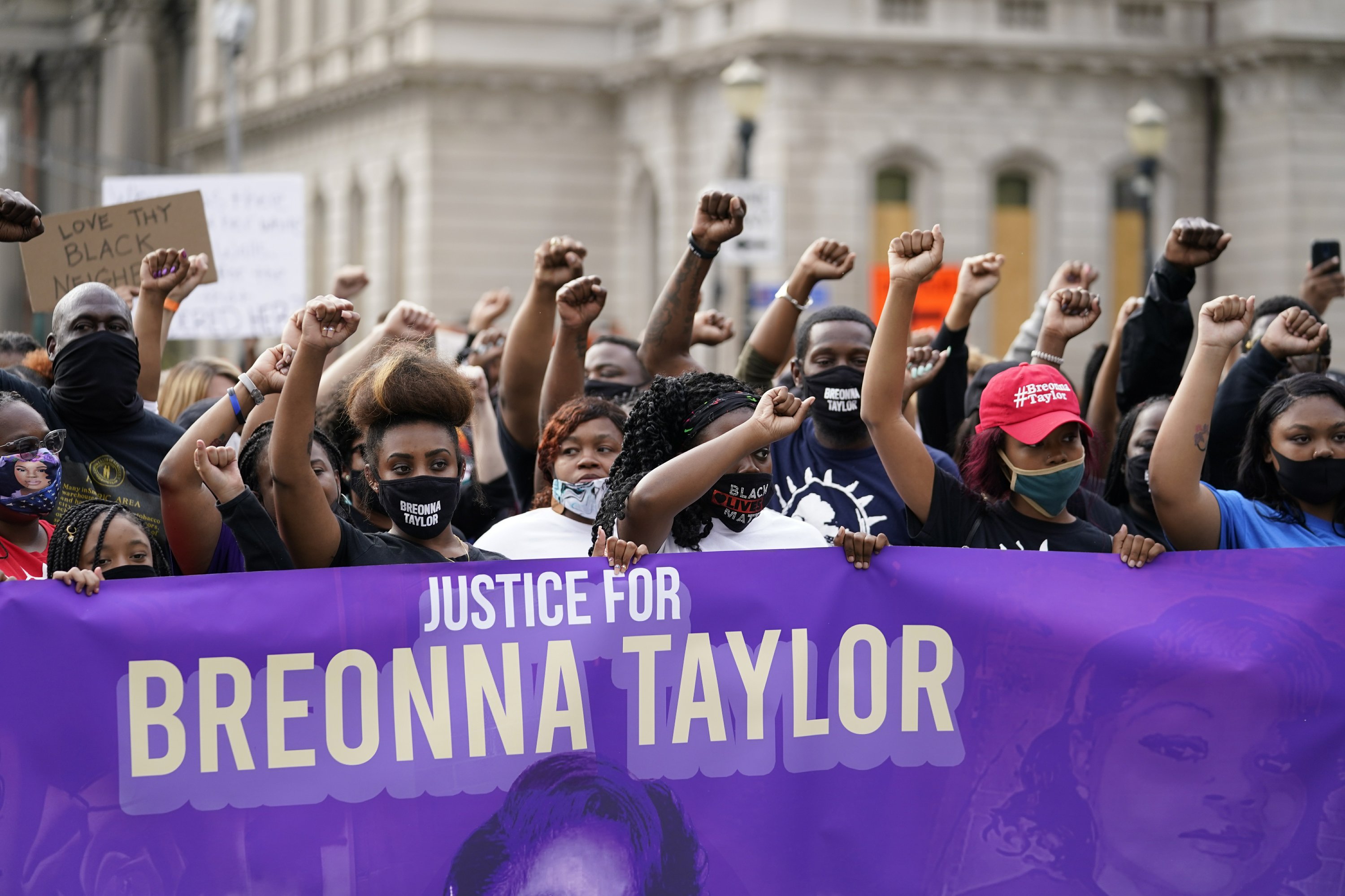 In this Sept. 25, 2020, file photo, Black Lives Matter protesters march in Louisville. Hours of material in the grand jury proceedings for Taylor’s fatal shooting by police have been made public on Friday, Oct. 2. (Photo: AP)

Lt. Dale Massey, a member of the Louisville Metro Police Department SWAT team that arrived on the scene, described the execution of the warrant as an "egregious act." He told investigators he and other SWAT members felt that after seeing what had occurred and through their interactions with another police officer that "something really bad happened."

Massey's comments were included in extensive testimony and other evidence that shed light on the internal Louisville police review of Taylor's death. Protesters in Louisville and elsewhere around the country have demanded accountability for her killing.

The police files contain conflicting information about when the contacts ended between Taylor and her ex-boyfriend, Jamarcus Glover.

In a recorded jailhouse conversation on the day she died, Glover said he and Taylor had not "been around each other in over two months."

"I ain't got nothing going on with Bre no more," he told a woman whose name was redacted from the report.

Other evidence suggests Taylor and Glover were together in the same vehicle a month before her March 13 death.

On Feb. 13, the evidence shows, a pole camera showed Glover driving a car registered to Taylor. He pulled up in front of a residence and went inside. A few minutes later, Taylor got out of the passenger side of the car, looked around for a few seconds and then got back in the vehicle. Glover soon left the home, got back in the car and drove off.

Taylor, a 26-year-old Louisville emergency medical technician studying to become a nurse, was shot multiple times after being roused from sleep by police at her door. The warrant was approved as part of a narcotics investigation. No drugs were found at her home.

The case has fueled nationwide protests against police brutality and systemic racism. When police came through the door using a battering ram, Taylor's boyfriend, Kenneth Walker, fired once.

"We think the public is going to understand even more so why we're so frustrated with how this investigation went down and why there was no criminal accountability," he said by phone.

As for the investigative accounts regarding Taylor and Glover, he said: "You don't see anything in these files that denotes any sort of connection between the two of them for the vast majority of February and March. So it still begs the question, what made them decide ... to go hit this (Taylor's) house."

Louisville Mayor Greg Fischer said it was important to release the police investigation files as quickly as possible, after making "necessary redactions." Much of the information in the files was included in records from the grand jury proceedings released last week, he said.

"I urge all to be sensitive that these files contain information and images that are traumatic and painful," Fischer said in a release.

Details of the chaos and confusion during the raid that resulted in Taylor's death were revealed in 15 hours of audio recordings released recently. They contained testimony and recorded interviews presented last month to the Kentucky grand jury that decided not to charge any Louisville police officers for killing Taylor.

Taylor's name came up in a drug case at least in part because she had posted bail a few times from 2017 to January 2020 for Glover and another defendant, Darreal Forest, in amounts that went as high as $5,000, according to police files released Wednesday.

Officer Brett Hankison, who has since been fired, was the only officer indicted by the grand jury, which charged him with wanton endangerment for shooting into another home with people inside. He has pleaded not guilty.