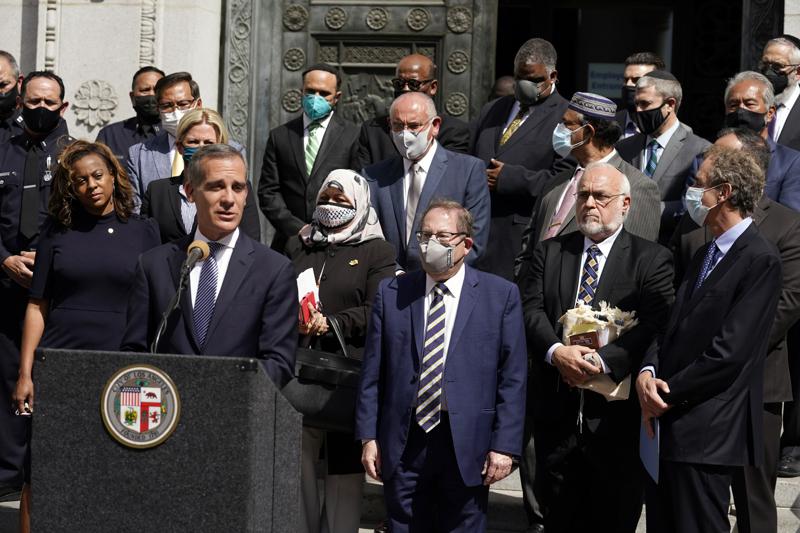 In this Thursday, May 20, 2021, file photo, Los Angeles Mayor Eric Garcetti, at podium, speaks in front of civic and faith leaders outside City Hall in Los Angeles. (Photo: AP)

Los Angeles police on Saturday announced the arrest of a suspect in an alleged attack by a pro-Palestinian group on Jewish men outside a restaurant earlier in the week.

A police statement, which did not identify the man, said he was arrested on suspicion of assault with a deadly weapon late Friday at a residence outside the city of Los Angeles with assistance from a U.S. Marshals Service task force.

Increased bail was requested “due to the crime being motivated by hatred,” the statement said.

“The male is one of the primary suspects in the assault and beating of several men who were outside of a restaurant in the evening hours in the Mid-City area of Los Angeles on Tuesday May 18, 2021,” it said.

The violence, recorded on video, occurred when a car caravan flying Palestinian flags stopped near a restaurant where diners were eating at outdoor tables.

Witnesses told news media that people in the caravan threw bottles and chanted “death to Jews” and “free Palestine,” and men got out of the vehicles and began asking who was Jewish. A brawl erupted when two diners said they were Jewish.

Civic and faith leaders have condemned the incident.