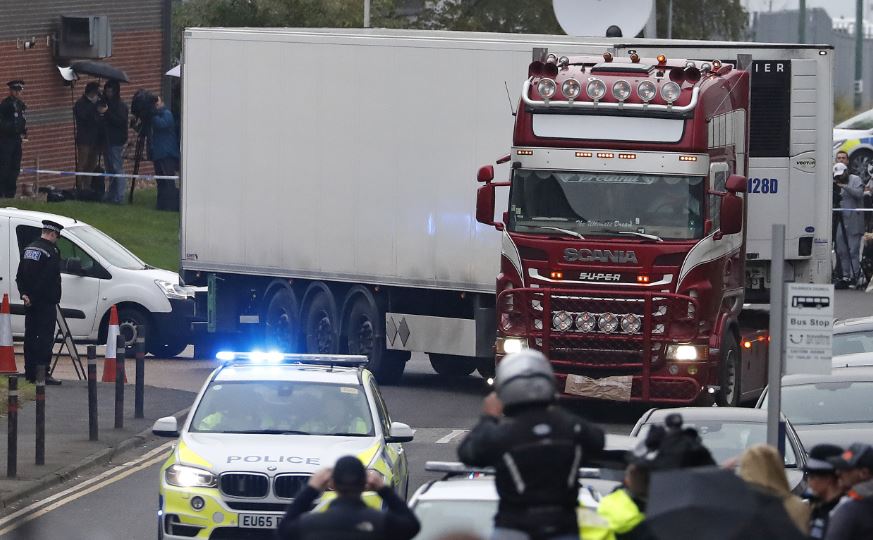 Thirty-nine Vietnamese migrants found in the back of a truck in Britain last year died of lack of oxygen and overheating, police said on Tuesday, citing provisional autopsy results.

The victims were found dead in a refrigeration trailer in the county of Essex, east of London, on 23 October last year after having been transported by ferry from Belgium.

"All post-mortem examinations have now been completed and we await the final reports for all 39 victims," Essex police said in a statement.

"The provisional cause of death for those in the lorry was a combination of hypoxia (lack of oxygen) and hyperthermia (overheating) in an enclosed space."

The police said they had made two more arrests in connection with the deaths and wanted to know more about two similar journeys made on 11 October and 18 October.

"It is believed that lorries were used to facilitate the unlawful entry of people into the country via Purfleet," the statement said, referring to the port the Vietnamese came through.

"We believe that these people, or anyone who had knowledge of the journeys, has crucial information to assist our inquiry."

They said a 22-year-old man had been arrested in Northern Ireland on Sunday on suspicion of manslaughter and facilitating unlawful immigration.

Meanwhile, Gheorghe Nica, 43, from Essex, was detained on a European Arrest Warrant at Frankfurt Airport on 29 January and has been charged with 39 counts of manslaughter.

The driver of the truck, Maurice Robinson, 25, from Craigavon in Northern Ireland, was one of several other arrests. He is awaiting trial on the same number of manslaughter charges.

He admitted conspiracy to assist unlawful immigration at a previous hearing in November.

A second truck driver from Northern Ireland, Eamonn Harrison, 23, is facing extradition from Ireland this week.

The remains of those who died have been returned to their families in Vietnam.