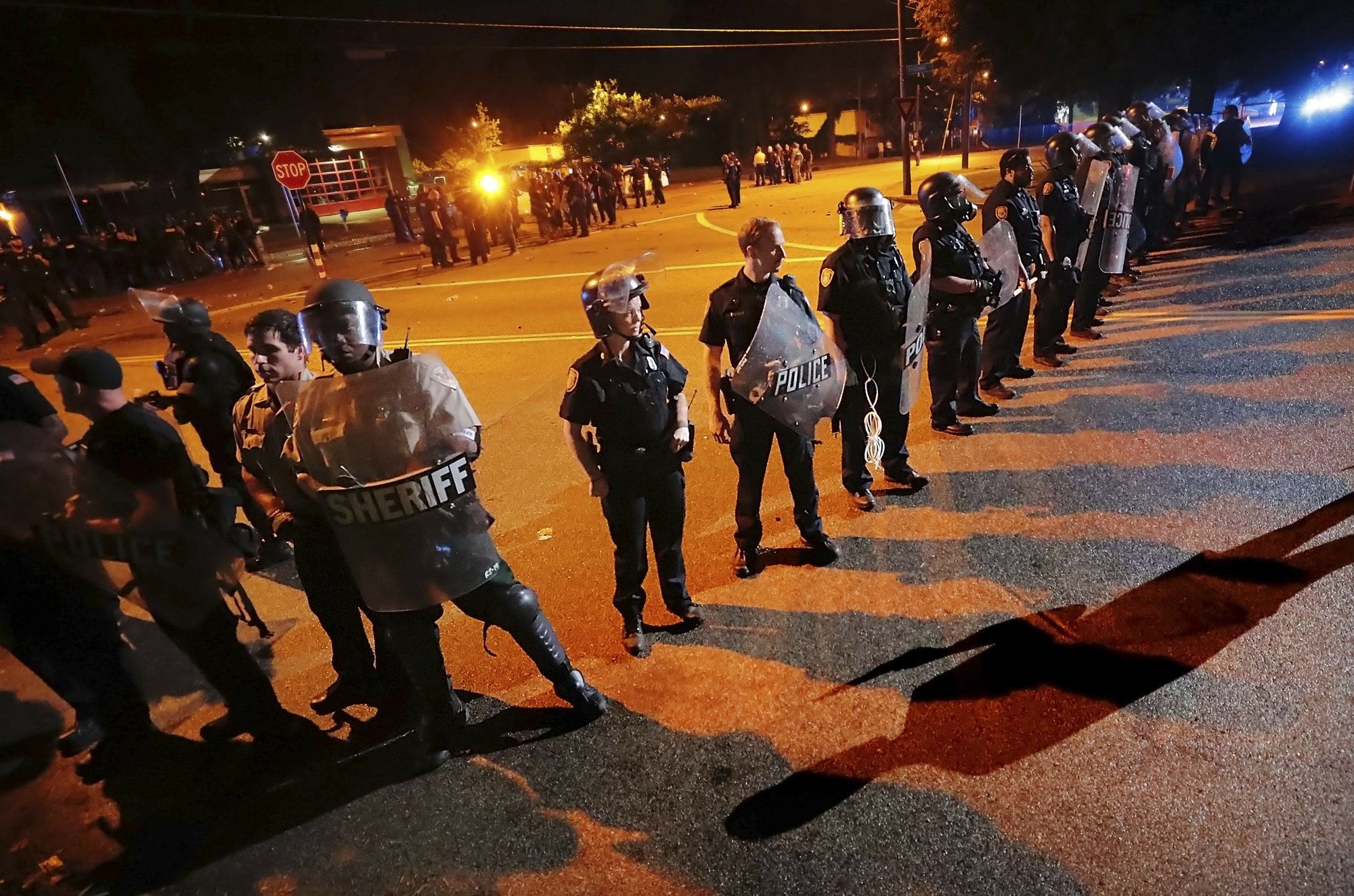 Authorities maintain a perimeter around the crime scene after protesters took to the streets of the Frayser community in anger against the shooting a youth by US Marshals earlier in the evening, Wednesday, June 12, 2019, in Memphis, Tenn. (Photo: AP)

Police appealed for calm Thursday in a tense Memphis neighborhood where a rock-throwing crowd gathered after federal marshals fatally shot a black man who, authorities said, had rammed a police vehicle with a stolen car.

Thirty-six officers suffered minor injuries from flying rocks and bricks in the hours following the death of 20-year-old Brandon Webber, who was killed Wednesday evening after he exited the car holding some type of weapon, authorities said.

Webber had been wanted in a June 3 shooting that happened during a car theft in Hernando, Mississippi. The victim was shot five times and survived. The car was the one used to ram the police vehicle, according to DeSoto County, Mississippi, District Attorney John Champion, who spoke Thursday at a news conference.

Elected officials condemned the violence, and the police chief pleaded for patience while the shooting is investigated. But unanswered questions left many people angry as they recalled other police shootings around the country.

Shortly after Wednesday’s shooting, people began to gather in the area, and their numbers swelled as some livestreamed the scene on social media. Memphis police initially responded in street uniforms, then returned in riot gear as people began hurling rocks and bricks.

During the unrest, officers cordoned off several blocks in the Frayser neighborhood north of downtown and arrested three people. By 11 p.m., officers had used tear gas and most of the crowd dispersed, Police Director Michael Rallings said.

Rallings implored residents to wait until the Tennessee Bureau of Investigation, or TBI, finished its investigation. He appealed for people to refrain from violence and from spreading possible misinformation about the shooting.

“I need everyone to stay calm,” Rallings said.

Separately, Tennessee Gov. Bill Lee said through a spokeswoman that the shooting would be fully investigated. Lee’s press secretary, Laine Arnold, said the crowd’s actions were “not representative of the community, but we stand firmly against acts of lawlessness that threaten the safety of our neighborhoods.”

On Thursday morning, officers on horseback patrolled the neighborhood, and lines of police cars with flashing blue lights were parked along the street while a helicopter flew overhead.

Webber’s home was in a residential area of the working-class neighborhood in north Memphis. By Thursday afternoon, the police presence was minimal, with two squad cars parked in front of a fire station. No uniformed officers were visible.

About 20 people stood outside of Webber’s one-story house, and others gathered nearby. One woman wept loudly and hugged a man as she cried.

The Rev. Andre E. Johnson said he was standing among the protesters when tear gas was released. He said he heard no police order to disperse.

People were upset because they initially did not know why the marshals sought to arrest Webber, said Johnson, who called him a beloved member of the community.

“The problem with it is they feel that police and the administration and city officials do not treat them as humans. That’s what it really boils down to: You are not worthy of an explanation,” said Johnson, who spoke hours before the Mississippi prosecutor described the allegations against Webber.

TBI spokeswoman Keli McAlister said a fugitive task force went to a Frayser home to look for a suspect with felony warrants. She said marshals spotted the man getting into a car, which then rammed task force vehicles several times before the man got out with the weapon.

Marshals then opened fire, she said. McAlister did not say how many marshals fired or how many times the man was shot. The TBI identified the dead man as Webber.

Authorities provided no details about the type of weapon or the charges that drew the task force’s interest. A criminal history for Webber released by the TBI listed two arrests, in April 2017 and April 2018, on charges including weapons possession, drug dealing and driving without a license.

Webber’s father, Sonny Webber, told The Associated Press by phone that his son leaves a 2-year-old boy and a young daughter, with another daughter on the way: “He would have had three children. Now he’ll have a child that he won’t get to meet.”

The TBI is routinely called in to investigate police shootings around the state. TBI investigators typically deliver a report to the local district attorney, who then decides whether to pursue charges against officers involved.

At least two journalists were also hurt in Wednesday’s violence. Police cars were damaged, a fire station’s windows shattered and a concrete wall outside a business torn down, officials said.

Memphis-area police shootings in the past four years have prompted sporadic protests. Among them was Darrius Stewart, an unarmed 19-year-old who was fatally shot during a fight in 2015 with Connor Schilling, a white officer who was trying to arrest him on outstanding warrants.

A Shelby County district attorney recommended that Schilling be charged with voluntary manslaughter, but a grand jury refused to indict him.