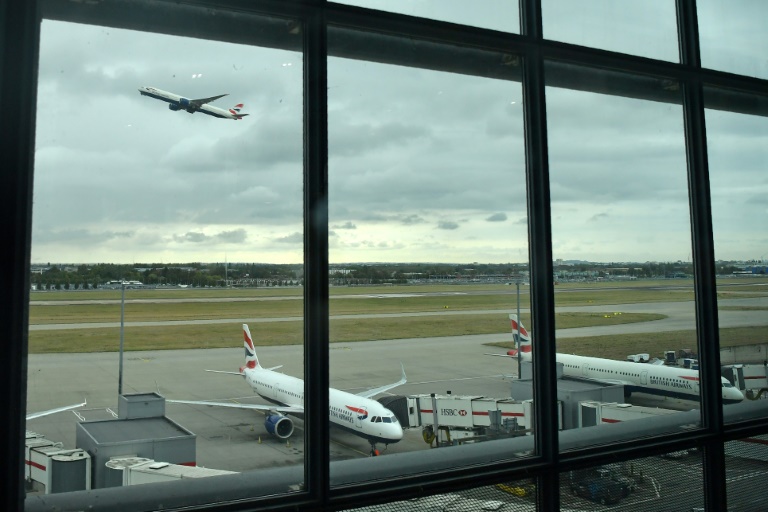 Heathrow rules stipulate that it must temporarily close should a drone be spotted within its five-kilometre (three-mile) exclusion zone. (Photo: AFP)

Campaigners from Heathrow Pause -- an offshoot of the Extinction Rebellion group backed by Swedish teenager Greta Thunberg -- had hoped to disrupt the travel plans of tens of thousands of passengers from across the world over the weekend.

But their first miniature device failed to take flight after receiving no signal from its hand-held remote control.

"They are jamming -- we can't get the signal," one campaigner said in a video posted on social media from what appeared to be the airport's outer edge.

"The passengers will be happy. We are not happy."

A London police spokesman refused to confirm or deny the use of jamming devices.

"We do not discuss security tactics," the spokesman told AFP.

But the department said it was imposing a "dispersal order" under a criminal statute act covering "anti-social behaviour" in areas surrounding the airport's vast grounds through to Sunday morning.

The campaigners' official aim is to prevent the construction of a third Heathrow runway and to cut harmful gas emissions to a net level of zero by 2025.

Yet their chosen means of protest also points to the hazards drones of any size pose to airports long term.

Heathrow rules stipulate that it must temporarily close should a drone be spotted within its five-kilometre (three-mile) exclusion zone.

It was expected to make exceptions should this only involve miniature drones flying close to the ground and away from runways or flight paths -- the rules Heathrow Pause intends to keep.

"Like-minded citizens just know that what we are doing is not a criminal act," group member Sylvia Dell told AFP as she prepared to fly her own drone in the coming days.

The retired mother-of-four said she was stirred to action by a United Nations report warning governments in October that they had 12 years left to stop the earth from warming to dangerous levels.

"We're the fire alarm ringing in the middle of the night telling people to wake up, your house is on fire," Dell said.

Several still-unexplained drone sightings around Heathrow and London's Gatwick Airport shut them down for several days over the winter holidays.

The group's members have met airport representatives and the London police to arrange precautionary measures aimed at avoiding accidents.

They had hoped to fly the drones at head height at hourly intervals that could keep the airport closed continuously for up to five days.

"You need to make disruption painful before the authorities take notice," Dell said.

A Heathrow spokeswoman said on Friday that the airport remained "strongly committed" to addressing climate concerns.

"We agree with the need for climate change action but illegal protest activity designed with the intention of disrupting thousands of people is not the answer," she said.

London police announced the arrest of five men and two women on Thursday and Friday "on suspicion of conspiracy to commit a public nuisance".

Dell said she faced "years" in jail because of two prior arrests during an Extinction Rebellion protest that ground parts of London to a halt for more than a week in April.

"Prison is a terrifying prospect," she said.

But "I find the prospect of not acting and allowing the world to collapse -- that's more terrifying for me."