WORLD Police will not save us from gun violence: US media

Police will not save us from gun violence: US media 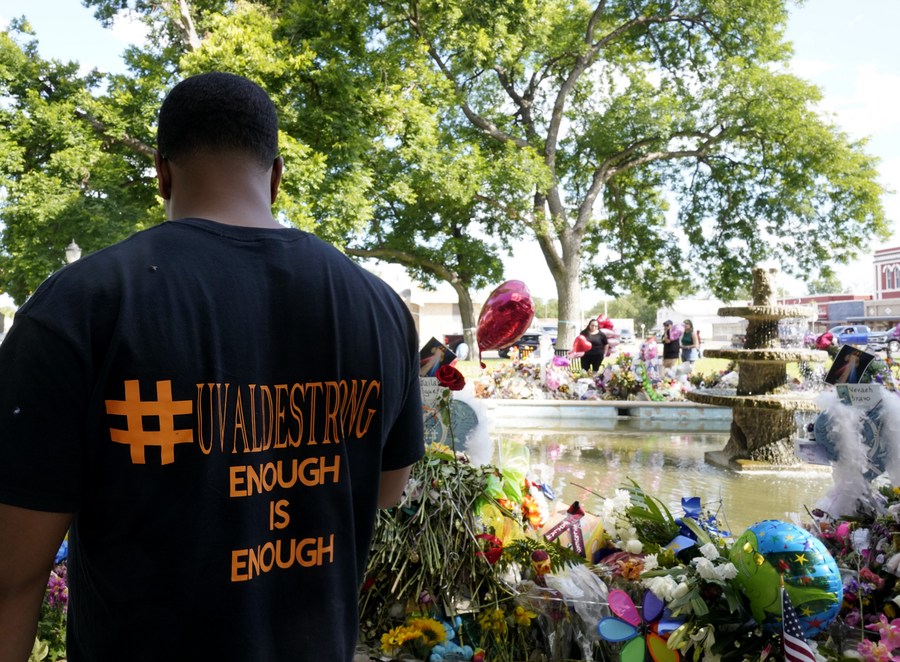 People mourn for victims of a school mass shooting at Town Square in Uvalde, Texas, the United States, May 31, 2022. (Photo: Xinhua)

LOS ANGELES - "Police will not save us from gun violence," said an opinion article published by US news organization the Minnesota Reformer on Tuesday, commenting on the tragic school shooting in Uvalde, Texas, which claimed the lives of 19 children and two teachers.

"This is a uniquely American story. The United States experiences a rate of gun violence 25 times higher than that of peer nations," said the author, Rachael Joseph.

Joseph is the founder of Survivors Lead, serves as vice chair of the Powderhorn Park Neighborhood Association and is a board member at Art Is My Weapon Minnesota, according to the Minnesota Reformer, which is an independent and nonprofit news organization.

Joseph pointed out that Uvalde is a city that spends 40 percent of its budget on policing in a town of approximately 16,000 people.

"According to the Action Race and Economy Center's budget tool, this spending is in the typical range for municipalities nationwide. Despite these expenditures, more children have been killed in schools with guns this year than cops on active duty," she added.

"Sadly, many voters believe that spending more money on policing will deter violent crime when we see in tragedy after tragedy, including the murder of my own aunt Shelley, where police were unable to prevent or intervene to stop violence. In short, despite the persistent messaging, police will not save us from gun violence," said the author, noting that more guns equals the potential for more gun violence.

Currently, there are estimates of over 400 million guns in civilian hands. That's more than one gun for every person in the United States, vastly more than any other nation in the world. Even if some researchers have found that more spending on police can at times reduce crime rates, the relationship isn't clearly established, and it ignores the significant downside risks of over policing, on Black communities especially. What is certain, however, is the correlation between guns and gun deaths, Joseph continued.

"Instead of spending nearly half the city's budget on police, imagine if Uvalde had allocated a portion of those resources for preventing adverse childhood experiences (ACEs), housing, addressing poverty, hunger, and support for those who've experienced trauma. The community might have stopped the gunman themselves, or had resources for the families and community, or maybe a troubled 18-year-old wouldn't have picked up an assault rifle to fix his problems in the first place," the author noted.