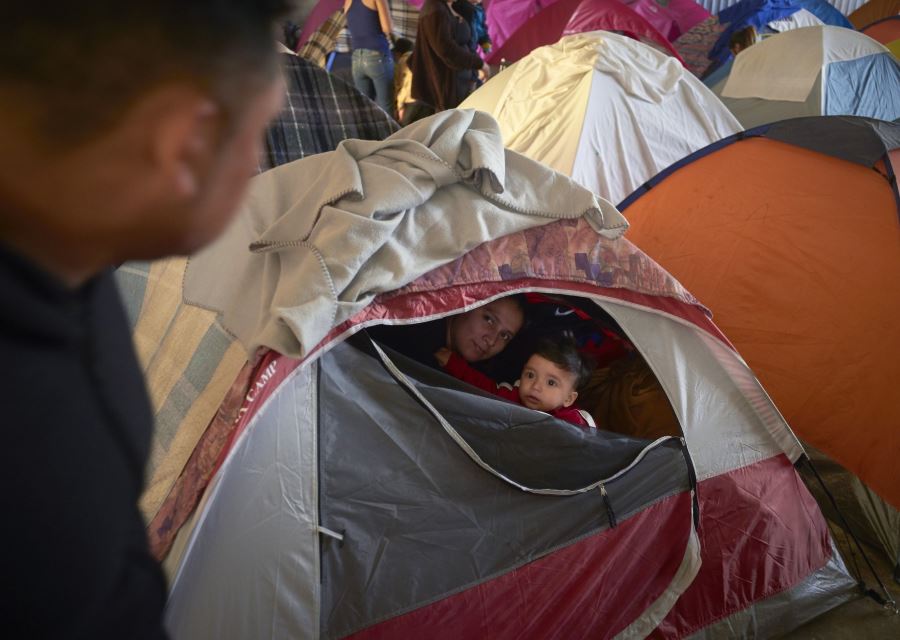 Ruth Aracely Monroy, center, looks out of the family's tent alongside her 10-month-old son, Joshua, as her husband, Juan Carlos Perla, left, passes inside a shelter for migrants in Tijuana, Mexico. (Photo: AP)

Juan Carlos Perla says he spent his first night in the US in a cold immigration cell with 21 others at the nation’s busiest border crossing. Fluorescent lights were always on in the basement holding area. Space was so tight that he laid his sleeping mat next to a toilet.

The 36-year-old from El Salvador soon reunited with his wife and three sons, ages 6, 4 and 10 months, who were in another cell, and the family returned to Tijuana, Mexico, to await asylum hearings in San Diego. They were one of the first families to contend with a radical US policy shift that makes asylum seekers stay in Mexico while their cases wind through immigration courts. Looking rattled hours later, Perla said he would skip his court date and instead settle in Mexico.

“Our fear is that we lose our case and get deported” back to El Salvador, Perla said. “That’s suicide for me, my wife and my children.”

Perla told a US Customs and Border Protection officer that he and his family abandoned their small bakery in the Salvadoran capital after he missed a monthly extortion payment to the 18th Street gang. They beat him and threatened to kill him and his family if he failed to pay the next installment, according to an interview transcript.

If his family’s experience is a sign, the policy may be having its intended effect of discouraging asylum claims, which have helped fuel a court backlog of more than 800,000 cases and forced people to wait years for a ruling. Trump administration officials say they want to deter weak claims, freeing up judges to consider more deserving cases.

A federal judge in San Francisco has scheduled a March 22 hearing to consider a request by advocacy groups to halt the practice.

Change is being introduced slowly — 240 people were returned to Tijuana from San Diego in the first six weeks. The administration expanded its “Migrant Protection Protocols” strategy on Monday to a second border crossing, in Calexico, California, and officials say the practice will grow along the entire border.

The shift comes as more asylum-seeking families from Guatemala, Honduras and El Salvador arrive at the US border with Mexico.

Border Patrol agents in San Diego have been told to target people who speak Spanish and come from Latin America, according to a memo obtained by The Associated Press. The memo says pregnant women and LGBT migrants are to be spared. The administration has said all along that Mexicans are exempt, as are children traveling alone.

Waiting in Tijuana is an unanticipated setback for asylum seekers who had hoped to be released in the US while awaiting a judge’s ruling. In Mexico, they lack the family connections they have in the U.S, and some say they feel unsafe.

Selvin Alvarado, his partner and their children from previous relationships stayed at a Tijuana shelter for about six weeks while waiting to be called on an informal list of asylum seekers seeking to enter the US at the San Diego crossing. To earn money, Alvarado unloaded ceramic tiles from delivery trucks in Tijuana while his partner watched their boys, ages 10 and 7.

After claiming asylum, Alvarado was separated from his family and put in an all-male cell with fluorescent lights that were always on and made him lose track of night and day. He told a CBP officer the next day that that he was “afraid of paramilitary groups in Honduras” and that he fled with his family after he discovered the head of his farming collective was stealing money and someone threatened to kill one of his children, according to an interview transcript.

Alvarado, 29, who came with a police report and other documents explaining work-related threats, was sent back to Tijuana with his 10-year-old, while his wife and her son were released in the US and settled with Alvarado’s cousin in Houston. He says he cannot work in Tijuana because he has no one to care for his son.

Many immigrants’ struggles are compounded by the scarcity of legal advice. Customs officials offer a list of potential legal aid providers, but Alvarado said his calls to those groups elicited no response. Al Otro Lado, a Los Angeles-based legal group working out of a building in downtown Tijuana, gave him an overview of US asylum procedures but no individual advice.

For immigration attorneys, it can be difficult to extend help to people who are on the other side of the border.

The American Bar Association’s Immigration Justice Project of San Diego cannot afford to go to Tijuana and will not pursue grants without insurance and license to practice in Mexico, said Adela Mason, the group’s director.

Catholic Charities of the San Diego Diocese had to overcome worries about safety and not having license.

“It’s a fine line between going down there and providing assistance in a way that is legal but not practicing law in Mexico,” said Nadine Toppozada, the group’s director of refugee and immigrant services.

Initial asylum hearings in downtown San Diego are scheduled within 45 days, and administration officials hope to put them on a fast track. When their day arrives, asylum seekers are told to report to the border crossing for temporary admission to the US for a bus ride to court.