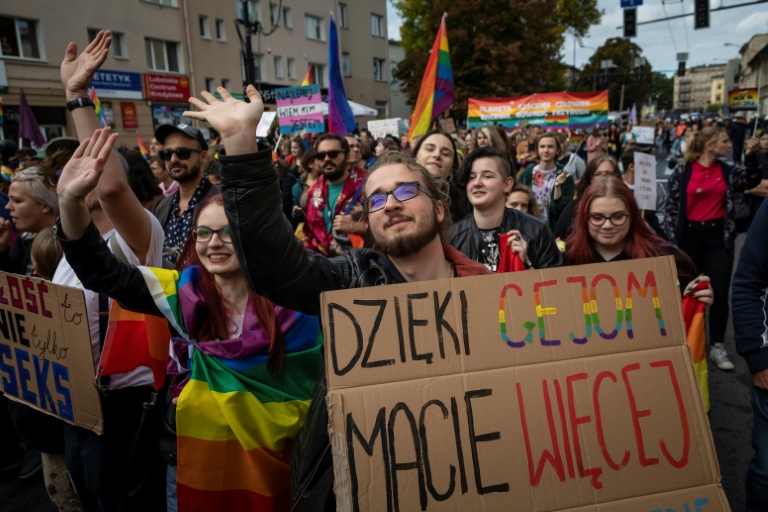 Lesbian, gay, bisexual and transgender rights have become a hot button issue ahead of the  October 13 elections in the devout Catholic country. (Photo: AFP)

Polish Gay Pride marchers under heavy police guard defied far-right groups and conservative campaigners on Saturday who hurled bottles and eggs in an attempt to block them, an AFP journalist saw.

Some 400 supporters of LGBT+ rights marched through the eastern Polish city of Lublin some 170 kilometres (105 miles) southeast of Warsaw, waving rainbow-coloured flags and banners with slogans such as "Jesus taught love" and "Homophobia threatens Polish families".

But counter-protesters, some wearing ultra-nationalist T-shirts, clashed with police as they moved to block the marchers and then yelling anti-gay slogans, hurled bottles and eggs as the pride rally moved through the city.

Police used tear gas and water cannon to disperse the counter-protesters, some of whom were taken into custody.

Earlier this week a Polish court overruled a ban imposed on the march by Lublin Mayor Krzysztof Zuk over safety concerns.

Lesbian, gay, bisexual and transgender rights have become a hot button issue ahead of the October 13 elections in the devout Catholic country.

In July, a court ordered news magazine Gazeta Polska to stop distributing anti-gay stickers reading "This is an LGBT-free zone".

The slogan was based on a trend at local government level where PiS allies have declared themselves "free of LGBT ideology".

Violence marred the first gay pride parade in the eastern Polish city of Bialystok in July where football hooligans, some with far-right sympathies, also attacked marchers and police.

The incident sparked a series of protests with Prime Minister Mateusz Morawiecki condemning the violence but failing to speak out against the anti-LGBT campaign.

Polish Archbishop Marek Jedraszewski added fuel to the fire when he used a sermon to warn against the LGBT movement.

"The red plague no longer runs on our land," the clergyman said, referring to communism.

"But a new plague has emerged, neo-Marxist, that wants to seize our souls, hearts and spirits. A plague that is not red but rainbow."

His comments triggered street protests in Warsaw and the southern city of Krakow calling for him to step down.